Avocados, Ducks and Questions of Grammar 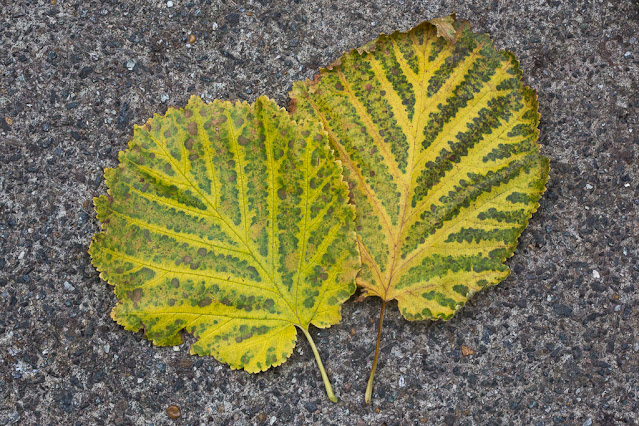 A pretty busy day yesterday -- a morning walk for Olga, then laundry and vacuuming and plant-watering for me. I brought our avocado tree back inside for the winter. We'd been debating whether to leave it outside to fend for itself (and likely die) or give it another year by bringing it in, and in the end, I just couldn't surrender it to the elements.

It is rather large and unwieldy but I think with some pruning it will be more manageable. Besides, it's our Christmas tree! I did trim off a couple of bits before bringing it in -- some leaves that were badly affected by scale and also the sprouts on the top, which would otherwise be scraping the ceiling.

I'd considered taking it to school -- we could install it in the library, where there are high ceilings, big windows and plenty of space. The head librarian gave her approval, but Dave balked at helping me transport it, which would basically mean trundling it on a wagon or dolly to St. John's Wood. (There's no way we could get it in a cab or hired car.) It would definitely take some time and we'd be quite the spectacle.

Those are not avocado leaves above, by the way -- just interesting ones I found on my walk with Olga. 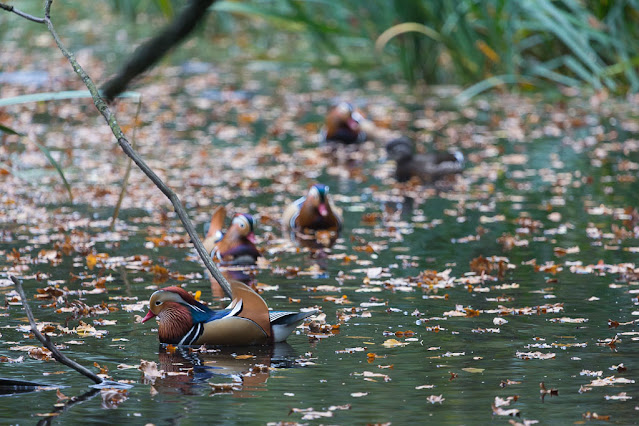 In late morning, Olga and I went to the Heath, where we found a group of very colorful ducks swimming on the pond. I think they're mandarins? Olga was interested and waded in for a closer look, which of course sent the ducks madly paddling elsewhere. Meanwhile, I was trying to photograph them, which was nearly impossible with the dog.

We came home to find a package waiting for me -- a birthday present from my in-laws. (It didn't go to New Zealand like Dave's!) They sent me a pair of denim shorts just like the ones they sent Dave, which we thought was pretty funny -- now we can be matchy-matchy. But seriously, I'll wear 'em. 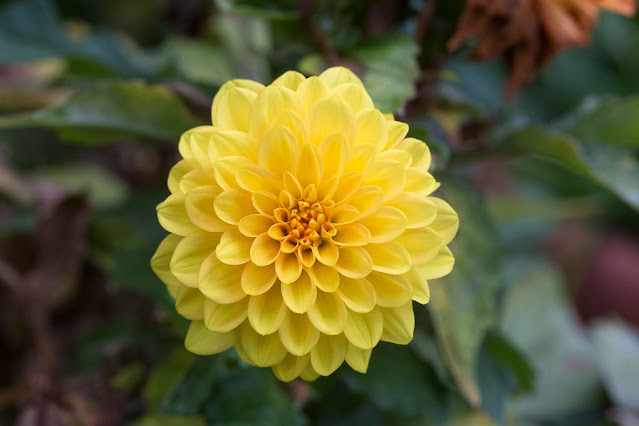 This dahlia in our garden is usually bright red, but for some reason, its most recent flowers have been bright yellow. Something about the change of seasons? Less light, lower temperature? I have no idea.

Last night we watched "The Social Dilemma" again, because Dave fell asleep midway the night before, and I really wanted him to see it. (He's far more addicted to his Facebook news feed than I am.) He made it all the way through this time, and ended the evening by turning off all his notifications, so that's progress.

Here's an interesting grammatical note, if there is such a thing. You may remember that in yesterday's post, I treated the phrase "social media" as plural: "Social media are evil." I did that because "media," obviously, is plural -- the singular being "medium." But honestly, it sounded weird to me.

Google says the singular usage is also correct: "Social media is evil." And on watching the movie again, I noticed that everyone verbally refers to it in the singular, saying "social media does this" or "social media is that." People have the same tendency with the news media; they'll say "the media reports the news," rather than "the media report the news." This usage is also hotly debated, with some people saying that in the case of news media or mass media, singular usage is acceptable. I guess this is another example of our ever-evolving language.

Finally, during our exploration of the autumnal Heath, I made another short video featuring Olga. Enjoy!
Posted by Steve Reed at 5:52 AM

Lovely video of a beautiful woodland. Olga has yet to realise that barking up a tree doesn't make the squirrel come back down!!

Commenting problems, argh! The heath is stunning as are the ducks! My understanding is that dahlias can be very inconsistent and do often change color.

That clearing on the heath is magical. Strange to think that it is in such a huge city. It would be nice to camp there one night - you, Dave and Olga with a lamp in a small nylon tent, listening to the owls and the rustling of squirrels. You could fry bacon in the morning over a camp stove and Dave could sing summer camp songs from long ago.

Those ducks are exquisite! And the Heath is magical.

Isn't that a wise old Harpenden saying? "Barking up a tree doesn't make a squirrel come down" - I guess it's a plea for negotiation and persuasion rather than angry protest. Another Harpenden saying is: "If you need to weave straw come to Harpenden".

Love those ducks. They are so beautiful. I wish I lived close by I would help you get that avocado tree to the library. Love seeing Olga at the Heath.

For most people their eyes would just glass ove on this one but you are right.

I love the way Olga looks like she's surveying her domain at the beginning of the video. She must have spotted a squirrel near the end. Those ducks are truly beautiful. And that is a perfect dahlia. The image of you and Dave rolling the avocado tree around the streets of London put a smile on my face.

Frances, poor Olga - she is trusting; living in hope; within her own parameters. What Olga doesn't realize that those bastards (squirrels) just swing from one tree top to the next. Think monkeys; think Tarzan.

An Avocado Tree? In London? You are a better optimist than me, Steve, unless, right from the outset, you were happy to go without the fruit.

Thanking you, the leaves and the Dahlia for keeping me happy in yellow,
U

Your avocado is amazing! You and Dave are green masters! Our weather here is similar to yours but ours is darker , wetter, and colder. Our Avocado has suffered greatly- there are three leaves on a tender stalk , It will not make it through winter. Love seeing Olga, champion of squirrel terrorizing. Glad Dave changed his FB notifications, having managed to stay awake through the entire film. Important!

Those leaves have an interesting pattern. I love yellow so those dahlias are perfect. Olga looks wonderful. I enjoyed the little video. You have a super day, hugs, Edna B.

Apparently I have never learned to properly use FB, because I don't see all of the terrible orange wombat material, or the right wingers or any of that. I think that is probably a win for me. I spend enough time on twitter, so my social media needs are fully met. I admire your dedication to the avocado. Mine never made it out of the almost rooted stage.

I love those leaves. I managed to kill my avocado. I lovingly transplanted it to a bigger pot. It was so grateful that it immediately turned up its toes and died. I grieved for that plant for some time, hopeful that there would be a miracle. There wasn't. I took a deep breath and pitched it. I'd be interested to see what more grateful avocado looks like though.

Those sqirrels really give Olga the fits, don't they?

language is ever evolving and my position is usually if the person you are speaking to understands what you are saying then the usage is correct especially considering all the various dialects of any language. on the other hand, it pissed me off that the Oxford dictionary has finally included 'irregardless'.

I found that expecially annoying as well.

The trees in that video are huge and beautiful. I'm guessing Olga spotted a squirrel. I always tell Heidi that the squirells are mocking her when they chatter.

Yes, Olga firmly believes that barking at the squirrel will somehow induce it to plunge straight into her waiting jaws.

I never knew that about dahlias. Live and learn!

She spends a lot of time waiting around for me. Sometimes she gets so frustrated when I get out the camera that she starts barking.

The ducks almost look to be made of plastic. Regardless of rules if it is correct but sounds strange, I don't use it. My speech sounds weird enough already.

It's one of my favorite spots on the Heath -- but CAMP there? Are you crazy? We are still in a city full of lunatics and criminals, you know. :)

I love those ducks! I've never seen them on the Heath before. I wonder if they flew over from Golders Hill Park, where they're normally resident in the ponds.

I wish you could help with that! Dave firmly turned me down. LOL

You mean about the grammar question? It's a tough one to sort out, for sure.

Oh, I have no illusions that this tree will ever produce fruit. It's just a fun exercise in growing something.

Your avocado may need a sunnier place (admittedly difficult in our climates) -- maybe try a brighter window?

Glad you liked the video! I was so impressed by those leaves. They seem quite unusual even for that kind of tree.

I don't see any of that stuff either. Facebook has not concluded that I am at all political, which is fine with me.

How strange! Repotting it should indeed have made it happier. The good thing is, avocado seeds are easily obtained so you can try again if you get ambitious. :)

Oh, they infuriate her!

I didn't know that, about "irregardless." Yeah, that's pretty appalling!

Yeah, Olga spotted a squirrel -- or thought she did, anyway.

Steve, the very saddest thing is that I've never been able to make an avocado pit grow (and not for lack of trying). I finally gave up on the toothpicks and glass of water thing and began stuffing my avocado pits into a very large and over grown spider plant pot. Quite seriously, it was a couple years before one sprouted. It grew quite happily in the spider plant for months, but it began to look very strange. So I repotted it and... There is always the possibility that another one will spring up from the plenteous pits in the pot. Not holding my breath though.