Beethoven and the Salad Stem 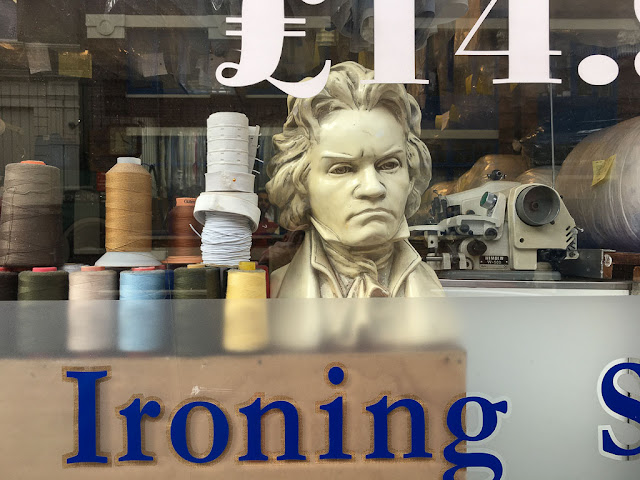 I was walking past this cleaner's yesterday and noticed they have a bust of Beethoven (I think?) in the window. I guess that makes some sense, since it's across the street from the offices of the English National Opera. (Beethoven apparently wrote just one opera: "Fidelio." And no, I did not know that off the top of my head. Thank you, Google.)

Anyway, it kind of reminds me of Schroeder.

I was just reading that Trump has gone on a tirade against people in his inner circle for not sufficiently abusing the power of their offices to persecute his enemies. Specifically, he wants federal charges against Obama, Biden and Hillary Clinton. Apparently the steroid he's taking for his Covid infection can have psychoactive properties, making people feel manic and invincible -- so we have an even crazier president than usual!

I've spent the last few days in the library combing through our patrons in our computer system and deleting people who have left the school. Yes, I did this already several weeks ago. But my boss got a spreadsheet of all our patrons and we discovered still more people who are long gone but have never been taken out of the computer. Sometimes when people leave in the middle of the year I don't get notified, and the Lower School (which has a separate but connected library system) hasn't been as careful to remove departed patrons over the years. So I'm playing catch-up. Fortunately I like projects like this -- they appeal to my sense of order. 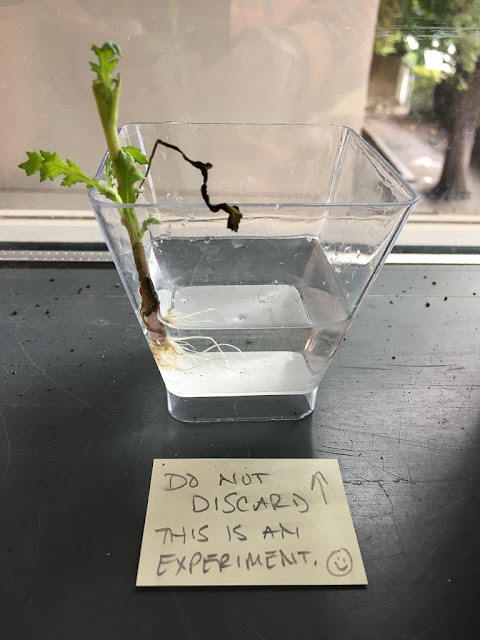 Last Friday I was eating lunch when I came across a stem with roots still attached in my boxed salad. After my boss and I laughed about how gross it was, she suggested I put it in some water to see if it would grow. So this is the result. We don't know what it's going to become, but it's already put out lots of new roots and even some leaves. It's probably a lettuce or arugula of some kind, but I suppose it could be a dandelion. Maybe I need to pot it.

Oh, and I had my flu shot -- I got one free at work. I don't always get it, but I figured this is definitely not the year to skip it. At least the flu is one illness I hopefully won't need to worry about.
Posted by Steve Reed at 6:39 AM