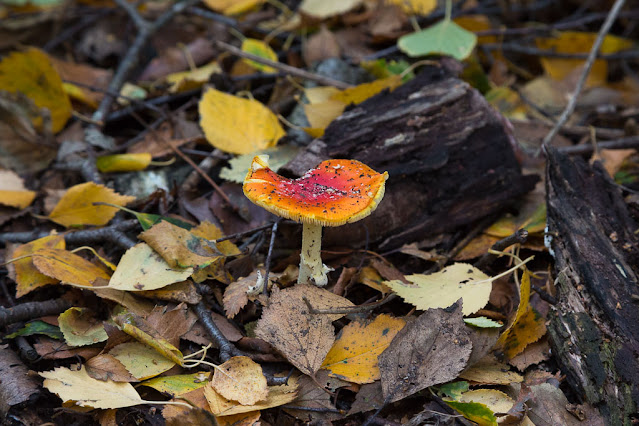 Just a few more days, and the USA's long national nightmare may be laid to rest. I'm cautiously optimistic, although I'm taking note of Michael Moore's warning that the polls aren't correct and Biden is not as far ahead as everyone thinks. I think that's entirely plausible -- many Trump voters are skeptical and don't like or don't trust media or pollsters. I think it's likely that they refuse to talk to pollsters or outright lie about their voting intentions. Dave argues that pollsters have built ways to detect those lies into the polls, but I'm still skeptical.

What happens if, say, a pollster calls ten people, and five of them are Trump voters, but they all hang up without talking to the pollster. The five Biden voters, meanwhile, are happy to talk. Does that mean the poll's result is 100 percent for Biden? I'm sure it's not that simple, but how does that work? Maybe if there's a large number of hangups that widens the margin of error.

I think if the polls prove to be off like they were in 2016, it could signal the death of political polling. What's the point if they can't get an accurate result? Not to mention it will mean another four years of inane blustering from the overly bronzed commander-in-chief -- which I keep telling myself we could survive, but ugh.

At any rate, the bottom line is, if  you're an American voter, GO VOTE!

Meanwhile, in the UK, the BBC has told its journalists that they should avoid marching or demonstrating for controversial causes -- an edict that some say could prevent people from joining LGBTQ Pride marches. This seems ridiculous to me. When I worked at The New York Times, there was a similar rule about expressing overtly political opinions, and that makes sense. But marches that centered on identity as opposed to politics were fine, even if some of the other participants expressed political views. There was no prohibition against the Pride march.

Further evidence that the time change has screwed up our internal clocks -- Dave had dinner ready last night at 5:30 p.m.! I was like, "I can't eat spaghetti NOW!" It reminded me of that Seinfeld episode about the early bird special -- that's exactly how I felt. But eventually I talked my stomach into it.

On my early-morning walk with Olga... 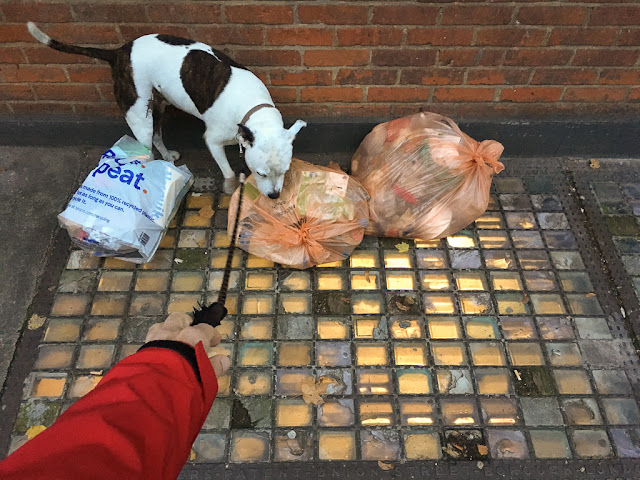 Mmmmmmm...garbage! Don't worry -- she didn't eat any of it, though I'm sure she would if I allowed her to. She insists on checking out every bag we pass. For me, a walk is a nice opportunity to get some fresh air and enjoy the scenery. For Olga, it's a chance to enthusiastically bury her nose in the neighborhood rubbish.

(Top photo: A colorful mushroom on Hampstead Heath.)
Posted by Steve Reed at 6:39 AM

I used to know lots of guys who, like Olga, only went for walks to bury their noses (or whatever) in the neighbourhood trash (or whatever).

I read the news this morning, and the new polling info. It depressed me so that I stopped reading. It doesn't seem possible that there are that many people in the USA who still think Trump is a good choice. That's a most depressing thought.

I would call that as a toadstool, not a mushroom. I sure wouldn't eat it. Polling seems to be such an imprecise science. In spite of the more they do and the more they understand, still it fails.

Surely the pollsters learnt lessons from 2016. It has to be Biden/Harris in spite of all the mud that has been thrown at them. As a tax dodger, Vietnam war draft dodger, misogynist, bully, liar and racist, Trump should not even be on the ballot paper.

Olga is forgiven for sniffing. It's what dogs do. Live by their nose. Unlike cats who live by suspicion (of being poisoned). Anyone who has ever tried to administer a pill to a cat (unless you are a vet or my son, The Cat Whisperer) knows what I am talking about.

Seagulls on the other hand don't have a care in the world. What they do have is a beak and they sure will use it round garbage overspill. Before I forget, has Olga ever buried a bone? For lean times, or just to fulfil an inbred desire?

I feel your pain re the orange question. Neither do I hold that much store by polls. Most likely because I don't like unwanted surprises. This will come as scant comfort to you, Steve, however the Angel tends to look beyond the obvious [headlines]. According to him not all that Trump aims for is shite. OK. Whatever. I am always grateful to see two, or more, sides. Though he [the Angel] does concede that Trump's delivery (not least his tweets) are beyond the pale/pail. Not everyone is a Kennedy, charming the socks off birds in the tree.

I definitely don't trust the polls. But it will give you some optimism to know that for every 10 pollsters that call us, we hang up on 8. So there's that. I'm afraid to even be cautiously optimistic. Sigh.

Republicans tend to show up on the day of voting, Democrats have been using early voting and mail in. Treating poll numbers like foot ball scores is misleading.
Worrisome election, vote, duck and cover!
Spaghetti for lunch/dinner sounds great, going to bed at seven...

I live in a red county. The lengths that people go on their attempt to explain tRUMP's behavior is just as strange and twisty as the mind of their idol. We will not know the results for days. This gives that horrible man time to whip his sycophants into a frenzy.

I think almost everyone is a bit nervous about the polls. The burn from 2016 is still very fresh. I'm feeling a bit more stressed these last few days and I blame it on the worry about the election.

We've been getting lots and lots of phone calls from unknown (to us) callers. We never answer those calls. It's been making me wonder if we've been missing out on polling calls. Who answers these calls anymore? I can't imagine who pollsters are talking to.

Interesting that there is some talk from Trump about losing. For Olga, each bagged sniffed tells her many things. We see these bags as garbage For Olga it's a story.

I think pollsters should be outlawed. When the votes are tallied we'll all find out what the results are. My little Pogo loves to sniff and check out everything. I guess he feels it is his duty to make sure all items are safe. hahaha. You have a great day, hugs, Edna B.

I don't pay any attention to the polls. and I'm paying less attention to the campaigns as the day gets closer and I will not watch the results. too nervous making and it's going to be very contentious.

Minnie will sniff a garbage bad and then pee on it. I always think about the garbage men. probably one of the reasons they wear gloves.

What is that grating that Olga is standing on? It looks like it has glass and light coming from beneath it. Perhaps it is a trick of the camera, but it caught my eye.

I've never been more nervous in my life, especially about what could happen post-election. I think that most of the 2016 polls were accurate since Clinton did win the popular vote by 3 million. However, that's not how our system works. Sigh.

It feels like the world is waiting for tRump to lose and then we can all breathe a sigh of relief.

Are toad stools inedible and mushrooms edible? Is that the difference? I would certainly never eat this one.

Fingers crossed, but I read the right-wing media sites just to see what people are saying, and it's astonishing how many people are rabidly pro-Trump. (And rabidly anti-Democrat, believing we're all plotting to lead the USA down the path to Marxism.)

I literally cannot think of a single Trump policy that I agree with. As far as I'm concerned, everything the man touches is shite.

Olga has never buried a bone to my knowledge. If we give her a bone, she settles down and consumes it right away!

I wish I'd paid more attention to the process of polling when I was a reporter. I never worked on those stories, but now I'd love to know how they handle hang-ups and other non-responses. (And ferret out the fake ones.)

The polls supposedly measure public opinion independent of who is voting or where...but I agree, duck and cover is not bad advice.

I read Breitbart now and then just to see what people are saying, and HOLY COW, are there some crazy theories!

Exactly -- I felt so badly burned in 2016 (by both Hillary and Brexit) I'm not sure I will ever again trust a political poll.

Interesting. My mom also never answers calls from people she doesn't know. And sometimes pollsters are really campaign workers trying to sway your vote. I'd stay off the phone, too.

It's true -- I'd love to know what's going on inside her brain as she sniffs her way along the street.

There may not be a need to outlaw them. If they're wrong this time around, no one will listen to them anymore!

It will be the middle of the night here when the results start coming in, so we'll be asleep (hopefully). We'll just catch up with it all in the morning.

It is glass. It leads to the basement of that building, and yes, it was lit up from below. I think it's supposed to allow daylight into the basement, but that particular grating is often covered with garbage bags so not very effective!

EXACTLY! I think they do it just to mess with the system, because a lot of them are completely unashamed of their racism.

I hope all the dire stories about how people will react are overblown and we have a peaceful period post-election. But I've been reading some scary stuff from news-site reader comments online.

And what about the Trump voters who are too ashamed to admit they're voting for Trump? I'm worried about that. I think it's a real thing.
Anyway, two more days and at least the campaign part will be OVER! Which is great because I'm over it already.