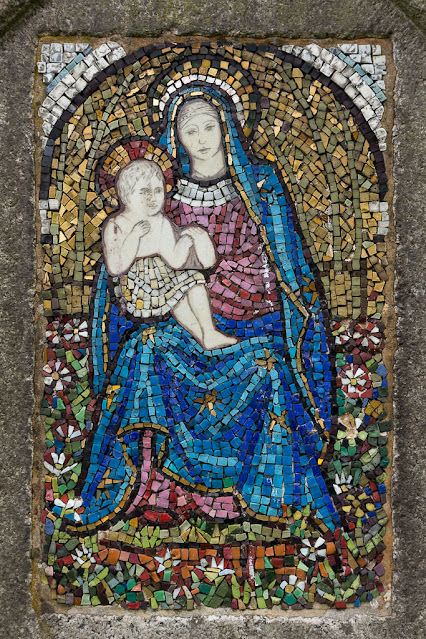 When I was wandering around Hampstead Cemetery photographing historical grave markers, I came across this stunning mosaic on a gravestone from the early 1900s. If the mosaic itself is that old, it has certainly weathered well. It was in an area where I'd never walked before, reaffirming my belief that every time I visit the cemetery I find something new.
Well, the universal consensus on the presidential debate seems to be that it was a mess. I had a great time last night reading reader comments about it in The Guardian. It's always interesting getting the British take on American politics, and I am continually impressed by how much the British know about our country and our system. Because The Guardian is a relatively left-wing newspaper, everyone was critical of Trump. One said, "Trump isn't fit to run a whelk stall." Another called him "a poo-slinging monkey." But my favorite comment characterized the debate as "two rats fighting over a courgette that's fallen into a urinal."
I laughed so hard I cried. I read it to Dave and I could barely get the words out.
(A courgette is what we Americans know as a zucchini.)
I've been reading newspapers and magazines so much lately I just can't get anywhere with a book. I have several books waiting for me and I've barely cracked the covers. My current Newbery book is called "I, Juan de Pareja," and it's told from the perspective of a slave owned by the artist Diego Velazquez in 17th century Spain. It was published way back in 1966 and I think it's pretty impressive that even back then, an author was trying to tell the story of someone who had been left out of history. I finally devoted enough time to it last night to get about 40 pages in.
Olga hasn't wanted her morning walk several days this week. I think it's because we've been getting rain. Fortunately Dave spent much of yesterday working from home, so she had indoor company -- although Dave said she seemed confused by his presence. Poor dog just can't develop a routine in these peculiar days of coronavirus.
Posted by Steve Reed at 6:02 AM

A nice blogppst which I very much enjoyed. Thank you sir. Keep up the good work!

Poo slinging monkey made me laugh, I have to remember that one, lol
I couldn't believe that two grown men who have so much power could behave so abominably.
What the **** is going on in the world?
Briony
x

That Madonna and Child mosaic is stunning, as indeed were some of your photos of Hampstead Cemetery you posted a few days ago. With my love of graveyards I can't believe I haven't been. But will. How much do you charge for a guided tour? I'll bring a picnic hamper.

There is one gravestone photo I'd love to show you. It's on a book jacket but have yet to find out where and whose it is.

As to your lament re being so sucked into the vortex of the daily news that reading books suffers; there is many a time I wonder what I'd be thinking about if it weren't for the Virus, Trump, Brexshite. Give me Putin on a horseback any day. Can you imagine how much headspace we lose over, I don't know, what exactly? For light relief I watched a Sci-Fi yesterday; not exactly my genre but the brief intro was enough to lure me in. It seemed so NOW. Except that the American President depicted in the film was the diametrical opposite of the current occupant. In my mind's eye I pictured the Orange one if put into that situation. He'd rage at the universe, calling it FAKE, holding the press responsible and taking the catastrophe as a personal affront.

One question the film didn't touch on, probably a (nihilistic) frontier too far, why the human race is hell bent on their own and the planet's survival; why we think ourselves so precious. It's what animals have over us. They live without pondering and when they are wiped out they are wiped out. No questions asked. Other than by David Attenborough (human).

I do like courgette analogy. We down under who take what we choose from both sides of the Atlantic know them as zucchinis.
The cemetery mosaic looks pretty fresh to me.
I don't consider The Guardian left wing. It tells how things are and the truth. Goodness knows, at least one large media outlet needs to, and aside from PBS in the US and niche outlets, it is badly needed there.

I have to say that baby looks practically demonic and the Madonna/Mother appears a bit concerned.
I would be too.
But it is a beautiful piece of mosaic.
Poor Olga! Life is confusing for all of us, isn't it? Nothing seems to be as it should be.

That is a gorgeous mosaic - however, after reading Ms. Moon's comment I'll never be able to see it any other way. Ha!

Gorgeous mosaic! You really do find lots of interesting things there.
I found it very difficult to concentrate yesterday because that debate was on my mind. What a mess.

The debate was sad. Well, it wasn't a debate. I'm not sure what it was but it was a sad statement of affairs.

That is a beautiful mosaic. I had to take a second look after reading Ms. Moon's comment, and she's right. That baby is a bit demonic looking. Mmm?
Thank you for the morning laugh about the debate. Oy, we are in such trouble here.

"two rats fighting over a courgette that's fallen into a urinal." That would have to be my favorite too:)

The mosaic is beautiful. Dogs don't always like a big change in their routine. You have a super day, hugs, Edna B.

That mosaic is truly beautiful! Zucchini here is calabacín. And we have the added confusion of often first having to translate from American English to British English and then to Spain Spanish. Although I already knew a lot of British terms, having lots of family in England, I still sometimes feel like I've had to learn TWO new languages.

I actually have been preferring The Guardian's coverage over CNN's. They don't have to attempt to hide any bias. Although I'm grateful for Dana Bash's "shitshow" comment.

Maybe one of these fine days you'll meet up with the cemetery bobbies looking for grave robbers!

Steve I had to come by today to say this: I hear a lot of people complaining about Joe Biden when he turned loose on That orange bastard. Joe is human and we as human can only take so much crap from others. He should have gone over and knocked his ass, head first off the stage. I would have and given up wanting to be elected for President. The man got out of place talking about his son. His son has nothing to do with this. I have one son and he is 49 years old and if anyone mess around with him and I know it, you are going to have to answer to me. I don't play with anyone that keep messing with my child. Yesterday he was on world news talking about he won the debate. He was also stating the fact that Joe is going to cancel the debate. Fact finder: not true. The debate commissioner is changing the rules. Joes did less than what I would have done. The fact is he is acting up so they can cancel the debate. Trump deserved everything Joe said to him and more. He waited to long to get on that butt.

I thought Joe was amazingly composed all things considered. Have you seen the painting of Juan de Pareja which probably inspired your Newbery book? It is in the Metropolitan Museum and my favorite of all Velazquez’ work. It is expressive and sensitive, a stunning portrait.

I have to say that I am not so patient that I could have stood on the stage next to that baboon and listened to the spew issuing forth (https://www.cnn.com/2020/09/29/politics/fact-check-biden-trump-first-presidential-debate/index.html) and not gotten cranky. I doubt many could. Trump behaved like an idiot. The moderator could not even rein him in. I hope that you voted, Joe.

Briony: It is insane, isn't it? How did we get here?

Ursula: There are actually guided tours of Hampstead Cemetery through various private operators, and I've often thought I should take one. I'm sure I'd learn a million new things. I don't stress out over our human survival (or demise) as much as that of the countless other creatures that share the planet with us.

Andrew: I had no idea Australians also use the word zucchini. The Guardian certainly conforms to my idea of a good news source, but I can see how someone of another political persuasion may feel differently.

Ms Moon: Ha! I think it looks maniacal partly because a bird shat on it and its face is a bit dirty.

Bug: Great! She's destroyed it for everyone! LOL

Sharon: It really was a train wreck.

Red: Exactly -- it wasn't a debate at all. It was just a shout fest.

Robin: Oy indeed! I think the baby's face is mostly a result of a dirty gravestone, but I'll have to take a closer look the next time I go by.

Lilycedar: Isn't it brilliant?? I mean, it doesn't quite make sense -- why a courgette, and why a urinal -- but that's part of what makes it so funny.

Edna: Olga is definitely a creature of routine. She likes it when we do exactly what she expects.

Mitchell: "Shitshow" really did sum it up perfectly. I've found that as I live here I've picked up much of the British English vocabulary -- and I don't even really notice it until I go back to the USA. (Still no British accent, though!)

Catalyst: I hope not!

Angelicastar: I haven't heard many complaints about Joe, actually. It seems most people think he did what they would have done when confronted by Trump's endless bluster. (Then again, I'm not in Texas!)

Unknown: I've been to the Metropolitan Museum many times so I probably have seen it, but I didn't remember it. I looked it up and it definitely inspired the cover art for the book. I tried not to read too much about Pareja's life so it wouldn't spoil the plot!

Debby: Oh yes, I voted for Joe. Not even a question in my mind!