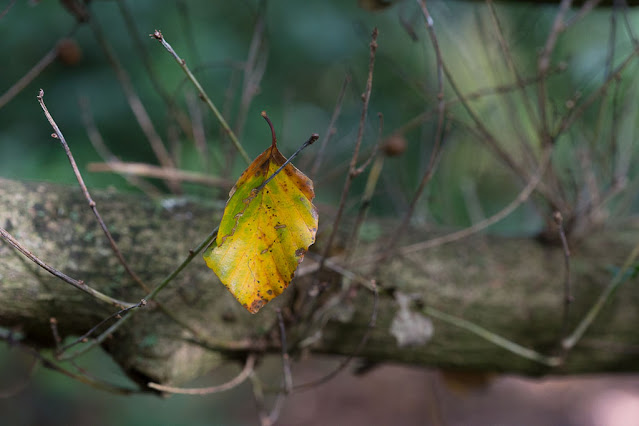 I'm having a very lazy morning. I just woke up a few minutes ago and I'm still lying in bed with Dave and the dog, both of whom are snoring. That's about the speed of life around here at the moment.
I did get lots of reading done yesterday, finishing both of my books, a Newbery novel called "The View From Saturday" and a quirky, readable biography of George Washington called "You Never Forget Your First." The latter was written by a woman who wanted to readdress some of the issues she felt Washington's earlier (and primarily male) biographers had elided or distorted -- his relationships with women, mainly his mother, and his treatment of his slaves. She also laid out the fact that there was a lot of infighting and partisan disagreement among our Founding Fathers, some of whom didn't like each other very much. I suppose the next time we despair at modern politics, we should keep in mind that even without Facebook and Twitter, it was always thus.
Anyway, it was an interesting book and not one of those gargantuan doorstop presidential biographies that so often seem to emerge.
Speaking of gargantuan, though -- my next book is the newest Cormoran Strike mystery, "Troubled Blood," which weighs in at almost 1,000 pages. Gulp! I have never been bored reading J. K. Rowling (who wrote the book under her mystery nom de plume Robert Galbraith) so I have faith this one will be just as compelling. But honestly. 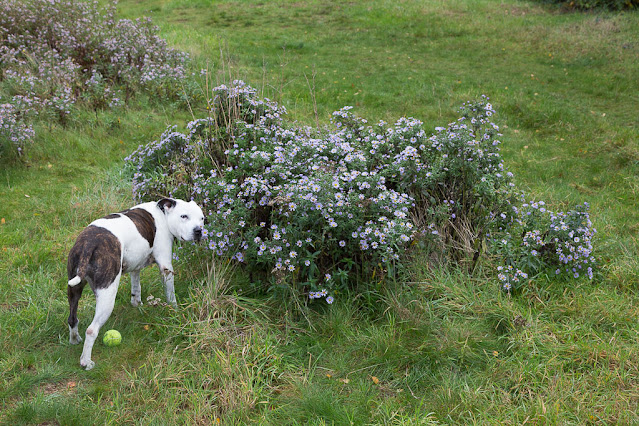 Olga and I took a long walk to the Heath in the late morning. She sniffed the stand of purple asters that blooms every year on the West Heath... 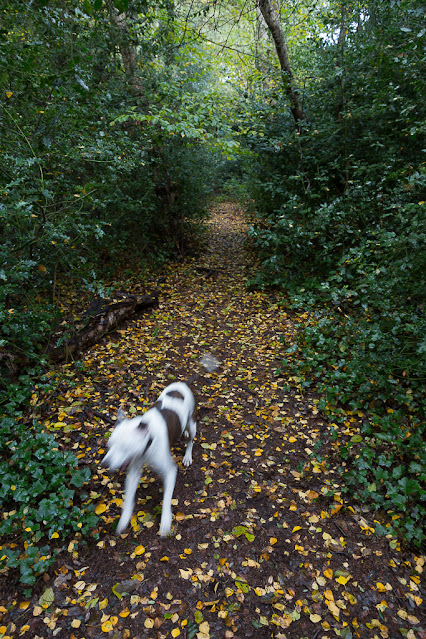 ...and ran around crazily in the woods chasing squirrels... 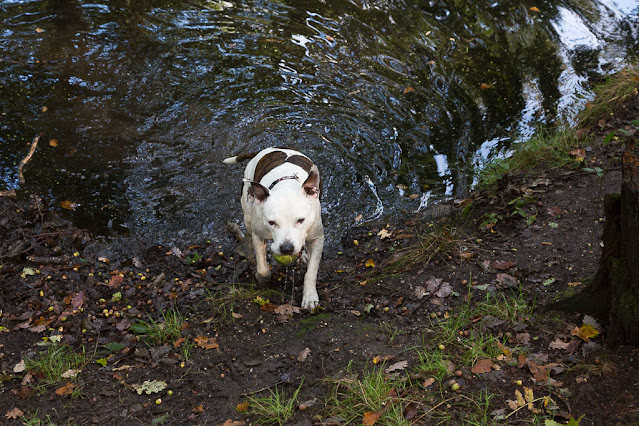 ...and even took a swim, although it wasn't that warm.

I cancelled Olga's dog walk today so we could go out again, given that I have the day off -- but she's not looking like she wants to go anywhere! I think it's going to rain later too. So that may or may not happen.
Posted by Steve Reed at 8:26 AM

I note you have a book lined up to read. I panic if I don't have a book waiting.
I know little about Washington but he had slaves? Btw, do you know where I can get one?
We were sitting at the beach today, within our 5km exercise limit eating rather good supermarket sandwiches and drinking a decent cup of coffee as a woman enticed her Westie into the sea. It led to a discussion about our own dogs of the past and their fondness or not of water. But neither of them liked to be washed and managed miserable faces so well.

And how, may I ask, did George Washington treat his slaves at Mount Vernon? I guess that being such a wise and kindly "Founding Father" he took them to the seaside for picnics and ball games on the beach or organised musical singalongs in the community centre at the holiday village where his happy slaves resided in joyful harmony.

As always, I love the Olga photos. And I'm glad to hear that you're keeping up with your Newbery challenge. I look forward to hearing what you think about some of my childhood favorites!

The Washington book sounds interesting. It's a joy to see Olga acting like a puppy.

I am torn about reading the new Cormoran Strike book. How does this not-supporting-an-artist thing work? Her views on transgender people hit too close to my home for comfort but how would reading this book or not affect her?
I don't know. I do like those books but Lord, they get so violent and complicated. Almost a thousand pages? Does she not have an editor?
I hope you and Olga got out for your walk.

The Heath is such a beautiful place. wish there was someplace like that around here that I could walk to.

I've not read any of those books but I have read plenty of books 800 - 1000 pages. sheesh, it seems like that's the end goal sometimes with lots of unnecessary verbiage or beleaguering a concept as opposed to being necessary to the story.

Some of our old politicians and leaders were not very nice people.

Thanks for the heads up on the latest Cormoran Strike book - yikes! I usually get them from the library, but if it's that long then I might have to purchase it because there's no way I could finish it in time.

What did I say the other day? You do come across as patient. 1000 pages? Try Proust's "In Search of Lost Time". If ever there was a more appropriate title for life in general, and reading Proust in particular.

On the upside: You know those books you never want to end? And feel bereaved when, invariably, they do?

Here is another thought, easily overlooked. We read a book. Do we ever spare a thought for how LONG it takes a writer to wrestle with the page till the finished product? No, we don't. The nearest comparison coming to mind is cooking a meal. You plan it, you shop for it, lug your bounty home, prep the ingredients, cook it, serve it with a flourish since the eye needs to feast too. And what do you know? The eating takes a fraction of time of your initial effort.

I'll be anxious to hear what you think of the Cormoran Strike book. I liked the first one but "Career of Evil" is still sitting in my reading list. I think the title keeps putting me off since we get a daily news feed of men who have really had careers of evil.

It's always so good to see Olga out on her walks.
I can't imagine reading a thousand page book. I can hardly put up with a thousand word essay. My twin brother sends me a haiku everyday. Brevity is our mantra.

Olga looks like she's a canine illustration of 'living your best life'.

I absolutely love seeing pictures of Olga. Dogs have a way of reminding us what is important in life!

You are one of my daily constants x

Andrew: I never seem to NOT have a book waiting. I'm not even sure what that feels like! Washington had lots of slaves, and although he emancipated them upon his death, the slaves acquired through his wife's family remained enslaved and many families were separated when they were ultimately sold. Olga loves to swim but she hates a bath -- go figure!

YP: The point of the book was that he wasn't as benevolent as many historians have led us to believe. He did chase slaves who escaped and bought and sold slaves in ways that divided families, and as I mentioned above, although he eventually emancipated his own slaves, he did not emancipate those acquired through his marriage.

Jennifer: Yes! I haven't blogged about it as much but now that school is back in session, I'm continuing!

Mitchell: It was interesting -- more so than I thought a biography of Washington might be.

Ms Moon: Let your conscience be your guide! You and I have talked about the Rowling controversy -- I still think her concerns about transgenderism have been somewhat misrepresented, but in any case, I'm fine with reading her books. It seems like a lot of writers, when they become popular, are under-edited. Look at Stephen King and his massive later tomes.

Ellen: It IS beautiful! And yeah, I'm honestly not sure ANY book needs to be that long.

Red: That's exactly the point of the book. Washington has become much more myth than man, and so many of us have a very idealized image of him.

Bug: I'll let you know how it goes! If there's a lot of dialogue maybe it will read quickly.

Ursula: I have never read Proust, but I always have it in the back of my mind that I will someday!

Sharon: Ha! I liked "Career of Evil" but I've found that when I finish those books I can't remember a thing about them. They just don't stick in my head.

Padre: She IS a happy gal!

Robin: There's a lot to be said for brevity! I try to be fairly brief in my blog posts, though I'm sure that's not always apparent. LOL

Debby: She DOES! That's a great way to put it. We call her "hundred-percent dog" because she's always ALL IN.

Michael: Definitely! I find that I enjoy walks so much more when I have Olga along.

John: Thank you! Olga appreciates it too. :)

The politicians of days gone by were, after all, just people like we all are. So why would anyone think that they acted any different from today's politicians? I always have books nearby waiting to be read. You have a nice day, hugs, Edna B.