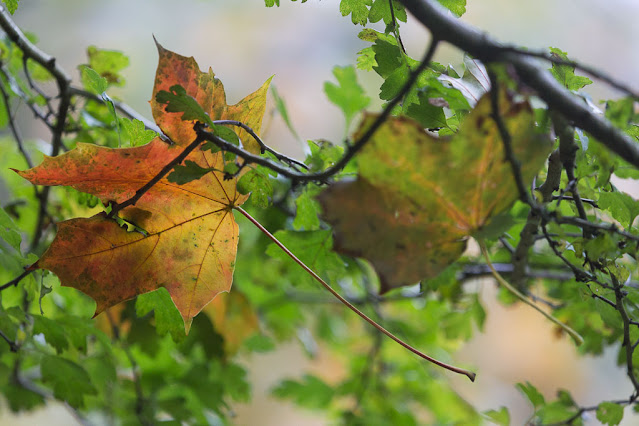 Olga and I took two lengthy walks yesterday -- first around the neighborhood and the cemetery in the morning, and then to Gladstone Park in the afternoon.

At the cemetery we found lots of colorful leaves catching in tree branches (above) and carpeting the ground. It was chilly enough that I had to wear a sweatshirt and a jacket. 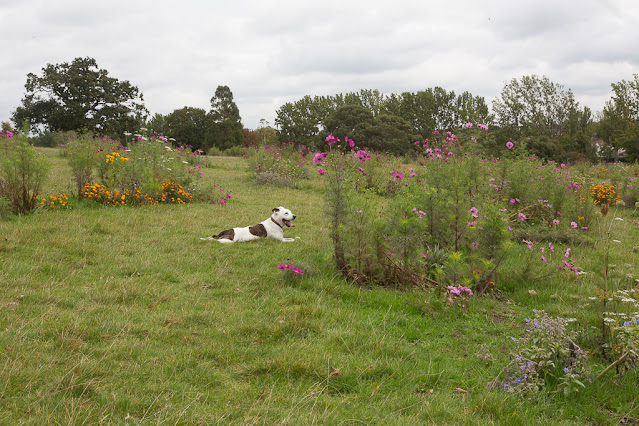 But when we got to Gladstone Park later, I was surprised to find lots of summer flowers still blooming -- cosmos, marigolds, rudbeckias, borage. They're looking a little raggedy, for sure, but still with plenty of blossoms. We're perched right at that in-between time, when it's cold enough for leaves to turn but warm enough for flowers to linger. 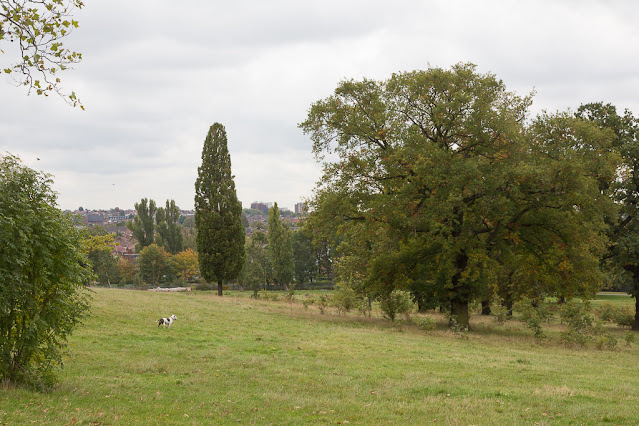 Olga and I don't often visit Gladstone Park, because it's kind of a hike from where we live -- the last time we were there, I think, was back in August 2018. (Can that be right?!)

There were loads of squawking green parakeets in the trees, and also loads of squirrels scampering on the ground. Olga spent all her time obsessively stalking them (above). 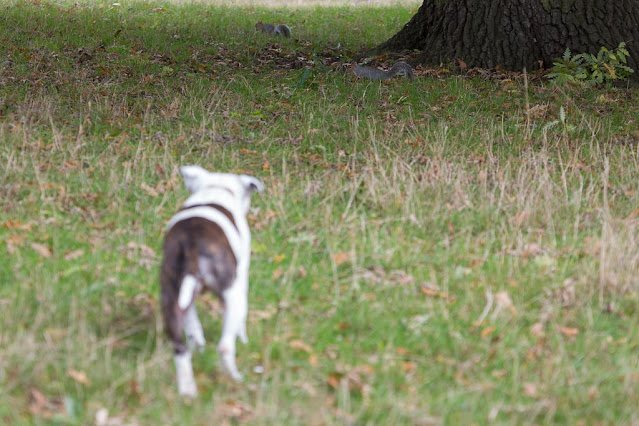 Here's a close-up. Can you see the two squirrels by the base of the tree? Naturally she didn't catch any but she ran herself ragged.
We got several compliments from passers-by. One man said, "Beautiful dog, mate!" And then talked about how she looked just like his dog at home.

Another woman, watching Olga run after her ball, said, "How old is HE?"
I said, "SHE is about ten."

The woman said, "Really? I never would have guessed HE was that old!"
I said, "Yes, SHE is very vigorous."

She said, "HE is very handsome."
It was like I was being corrected and told that my dog is a boy, despite whatever I might believe. Olga is kind of butch-looking, but c'mon lady, don't you think I know my own dog's gender?! 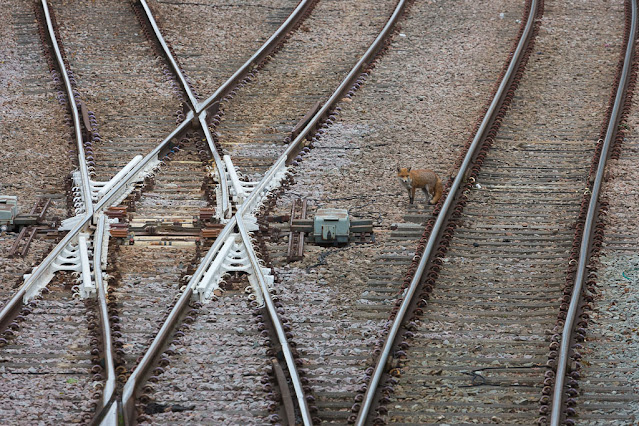 As we were leaving the park, which is bisected by a railroad line, we crossed over the footbridge and I looked down onto the tracks. I was surprised to see a fox down there, plain as day, ambling around and sniffing. Probably not the safest place to amble, but foxes have quick reaction time, so I'm not too worried.
Posted by Steve Reed at 7:34 AM

There are three types of people in this world: The partially deaf, those who pick and choose what they hear and those who just babble on regardless, not listening.

Your narrative reminds me of when the Angel was little (say three or so). He had (still does) the most beautiful long blond locks. One day I thought it prudent to show him how the other half lives and, instead of walking or driving, we took a BUS. Yes, PUBLIC transport. Eventually an elderly woman, sitting behind us, tapped me on the shoulder and said: "Your little girl's hair is gorgeous". Indeed. When the Angel turned round there was no mistaking him for "a little girl". "Oh", she said and smiled at her mistake.

Urban foxes. They are around and, unfortunately, often do amount to roadkill. Many years ago I had the eerie experience of one at the back of our rather large garden. Beautiful creature. So far so fine. Early morning, standing there in the conservatory, wishing that our grey squirrels (ruining my sunflowers by swinging from their heads) were RED too, I noticed that our very small cat was down there too, say two meters apart. Brill. Heart, miss a beat. For all I know they nodded at each other. And then they went their own way. Naturally, none of my friends believed my sighting. Till, in days to come, I managed to sneak a few photos of him (or her).

PS I like your " ... when it's cold enough for leaves to turn but warm enough for flowers to linger". Atmospheric.

The photo of Olga amid the wildflowers is beautiful. But then that Olga, he is always beautiful!

Contrary to most people's belief, Foxes do not catch cats. Our cats love to sit and watch the foxes and neither species takes any notice of the other.
Briony

well, what a surprise! you changed your format. thank you. how odd that there are clumps of cosmos and marigolds interspersed among the field. nice picture though.

some people just automatically go to a gender. my plumber always refers to my dog as 'he' when she is clearly a 'she'.

Even here in Lloyd, we have that same edge of summer/fall. We have marigolds blooming their heads off while every time a breeze blows pecan leaves, walnut leaves, pecan leaves spin and swirl to the ground. Meanwhile, the magnolia lifts its giant green and glossy leaves to the sun just as it does every day of the year.
Sweet Olga. Yes, maybe a little butch because bulldogs just are the butchiest breed but still very much your lovely lady.

Gladstone Park looks very pretty and also very peaceful. I looked on a Google map and that is quite a hike from your place. I wonder if that lady just wasn't listening or if she doesn't hear well. Or, maybe she's one of those people that thinks all animals are "he's". Regardless, that park looks like a lovely place to walk.

What a lovely walk. Nice to the flowers still blooming this late in the season. Very cool that you saw that fox.
I'm surprised that the woman couldn't quite get her pronouns right after all the corrections. Some people hear what they want to hear and disregard the rest.

Some people are just deaf to correction.

That photo of Olga lying on the grass amid the blooming flowers is really nice. What a great shot of the fox. I think it's a beautiful animal. Enjoy your day, hugs, Edna B.

What is that , about a ten mile walk each way? Good that Olga can make it and that you don't have to carry her. I ended up carrying Dexter on our "walks" but he was only 25 pounds. Great photo of Olga in the waning flowers, , there are so many of her that are super lovely! OLGA, the BOOK!
Winter came suddenly here. heater is roaring , rain, darkness, wool slippers and a cup of hot Joe. Cosy!
LOVE love love the photo of the tracks with fox! Really cool!

As a matter of fact how do you tell the difference between a HE dog and a SHE dog? Please explain in graphic detail. Great shot of the fox on the tracks. I just hope that two trains don't pass at the same time. Though Foxy Loxy may have speedy reactions he or she probably would not anticipate a second train.

Such remarkable pictures, especially that last one! I can remember when you got Olga!

Is Olga ten already??? I remember so well when we first met her!

I spent a few minutes looking up who can interbreed with whom, and discovered that the Eastern Coyote is 10% dog, 20% wolf and the rest is coyote, and they're all fertile. That was kind of cool. That was a good catch on the fox, I've never seen one in real life.

Oh, wow, a fox on the tracks. And right in the middle of a h-u-g-e (I was tempted to say y-u-g-e but fought the temptation down) city!

Foxes are doing better in cities..more food.
In Welsh dogs are masculine, cats feminine...unless you specify bitch or Tom....I wonder how they are in other languages, and what they were in English before it lost its gendered words?

Olga and Murphy are two peas in a pod in that they both love to chase squirrels, with never any hope in catching them. Where I live there have been coyote sitings. I've seen a fox in my walks, but never a coyote.