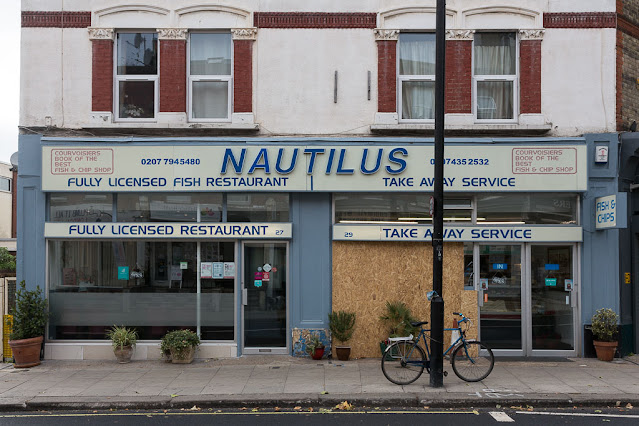 When I walked past the ol' Nautilus last weekend, it looked like someone had taken out its windows. Wonder what the story is there? We had a guy walking around bashing out shop windows many months ago, but I think the police eventually caught him. Hopefully this was just an accident.

Dave and I have still never been to this place. One of these days we need to try it.

So, yeah, what about the news of Trump and Covid? Karma, baby! I don't want to see him die, but I hope it at least makes him ill so he can see that it is real and it does affect people. (Apparently he is feeling symptoms and is enduring the inconvenience of hospitalization. Good.) Of course my mind, so primed for conspiracy thinking these days, immediately suspected the diagnosis was a hoax to excuse his debate performance and/or allow him to emerge in a week saying, "See? I had the virus and I'm fine! It's no big deal!" (There are apparently other people voicing similar suspicions.)

I told Dave that the right-wingers are going to assert that the Democrats somehow gave it to him. And yes, apparently that's already happening as well.

We've all become so insane. I'm not immune to it. 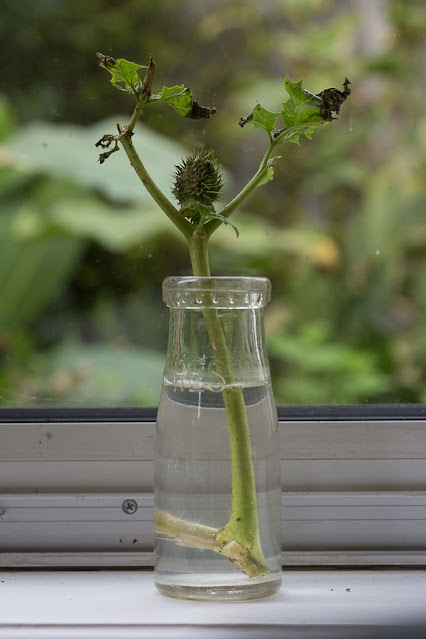 Remember that jimsonweed I photographed a couple of weeks ago? It got mowed down a day or two after I took my photo, but I found a limp stalk that included a seed pod, and I thought I'd bring it home and see if I could get the seeds to ripen. Now it's living quite happily in a milk bottle, putting out new leaves, and I'm wondering if it will even take root. Dave says, "That's why it's called a weed."

I'd love to have some in the garden. I think it's a very cool plant. (Yes, I know it's poisonous. I promise we won't make tea with it.)

I finally finished "I, Juan de Pareja." It wasn't my favorite Newbery book, I gotta say. A bit dry. But the author gets credit for creating a whole novel about a relationship that is apparently very poorly documented, historically. Velazquez didn't leave a whole lot behind besides his art, and neither did his erstwhile servant. 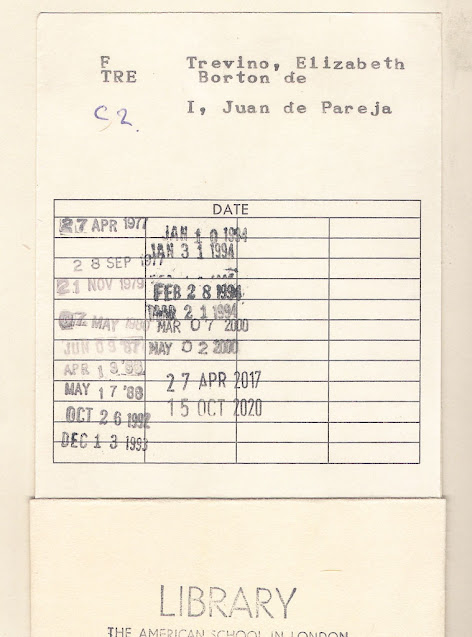 I love looking at the date stamps in some of our older library books. The library acquired this book in 1976, ten years after it was published, and it was first checked out the following April. I was nine years old! It spent my high school years -- the early '80s -- pretty much sitting on the shelf, but it was borrowed a couple of times in 1988, my last year of college. A couple more times in the early '90s, when I was in Morocco. When it was borrowed on March 21, 1994, I was actually in Seville, Spain -- where part of the book takes place! What are the odds? And it's interesting that after 2000 it sat untouched for seventeen years before being borrowed again.

A lot of our older books seem to suffer a dry spell after the late '90s. By then, kids were all over the Internet and playing video games, I suppose.
Posted by Steve Reed at 8:02 AM