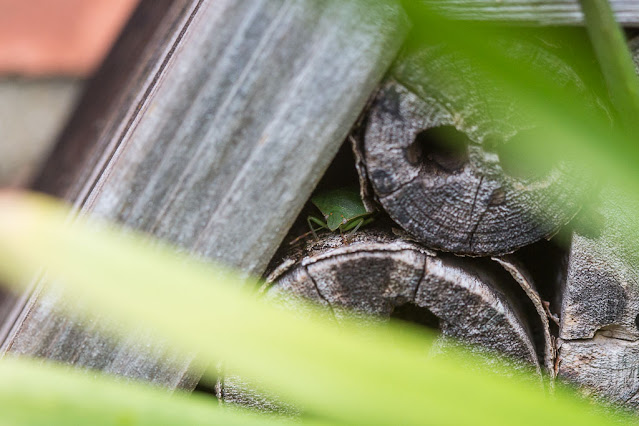 I went out in the garden yesterday after work and found this little green shield bug hiding out in our insect house (the same one where the bees were nesting earlier this year). Can you see him, tucked between the wooden cylinders?

This must be a rough time of year for insects. It's getting chilly and rainy and I wonder if they sense that their time is coming to an end. Actually, I doubt they have much concept of time -- or of themselves, for that matter.

I got an e-mail from the USPS this morning saying my election ballot has arrived in Tampa and is on its way to being delivered. Woo hoo!

I also see that Trump has been delivered back to the White House, all thumbs-up and dismissive of his infection (as we knew he would be). I'd hoped this experience would teach him something about respecting science and medicine, but I guess not. Instead he's walking around maskless with an active case of Covid. Argh! 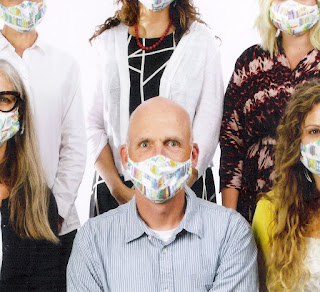 As his doctor said, he's not out of the woods, though. Apparently the latter part of the infection can be worse than the beginning as the body's immune responses peak.
The Times quotes another doctor saying it doesn't seem safe to allow him to go back to the White House, given that emergency situations can quickly arise in vulnerable patients with that latter-stage disease. But I'm sure Trump blustered and badgered everyone at Walter Reed into letting him go. They were probably happy to see the back of him.
Speaking of masks, we got our annual library portrait back the other day. We all take a group photo every year, and this year, of course, we're all wearing matching masks made by one of the librarians. You can't really tell in the (slightly blurry) picture, but the fabric is decorated with images of books.

Covidiot 45... I can't even speak. Love the mask photo. How cool that you're the only one completely visible. You must be really important! (I know. I know.) But you ARE really important.

As I understand it, Trump's symptoms were very mild when he went into your grandfather's hospital. (You must be so proud of Old Walter!) If you or I had had the same symptoms as Trump, we would not have been sent to hospital. It would have been a case of - rest and isolate and get in touch if there's deterioration.

As for the last photo... "The Librarian" By Stephen King - "Reed wasn't just stamping the books. He was quietly stamping out kids' lives too. Served them right for letting their borrowed books go overdue. That's what he said at the trial..."

We have those shield bugs here too.
Imagine being one of the nurses at the Walter Reed assigned to look after #45! Not only is he a liar, his doctors lied too. Lying doctors is beyond the pale and disgrace to their profession.
In twenty years time when you are retired and the collective memory has gone, someone will stumble across this strange photo of masked library staff and wonder what the masks were all about!

Aren’t you glad you’re working where you are and not one of the doomed souls having to schlep into work at the maskless White House, epicenter of the plague?

The shield bug is the same one we call a stink bug! They torment our garden.
That damn video of Trump climbing the steps and then ripping his mask off is absolute propaganda. And his complete unconcern about those who have to work around him is horrific. Of course, this is not how his base will see it.
Has anyone mentioned Barron? Does anyone ever mention Barron?
Nice masks! What strange times we're living in.

I see that little bug hiding in there! Yup, our idiotic leader has put on another show for his adoring fans. They will be calling him the messiah before long. It's all so surreal.
Love your masked photo!

You're right. Trumps behavior is quite predictable. He has the best medical care in the world to fall back on.

why would you think that insects, or all forms of life, aren't self aware? I don't think anything could survive that wasn't self aware and understanding of its environment.

and of course Trump badgered his way out of the hospital. the thing he hates most is looking weak and he equates illness with weakness so yeah, he's on twitter claiming to have beaten it and on the balcony visibly struggling to breathe while he says he feel better than he has in 20 years. of course he does, he's on heavy steroids!

The shield bug photo reminds me that I haven't seen here this year. Mmm? I wonder why. They are usually out and about in our garden.
The unfolding insanity here is a non-stop shit show, an unending barrage of mind-numbing stupidity. These next four weeks are going to be a nightmare that we can't even wake up from to find a moment of peace.
Nice masks!

Love the mask - & I think it's very appropriate that you guys documented this year with a mask photo.

I think your insect was feeling glad to find a home. As for President Trump, I'm so glad that he's able to be back at home so quickly. It's a known fact that quite often we heal much faster when we are at home rather than in the hospital. May God Bless our President and his beautiful wife and help them to heal quickly. You have a nice day, hugs, Edna B.

To my knowledge Trump and my father aren't related. The difference in their IQ being Exhibit One. Opposites on the spectrum. HOWEVER, my father's intelligence notwithstanding, and it's a big HOW, what those two guys do have in common is the notion that, how best to translate it, "That which isn't desirable, doesn't exist". No shit, Steve. If I died my father would maintain that it was all "psychosomatic" or, in absence of a dead body, that I had scarpered and gone to live, undetected, in South America. You know, Brazil or Mexico. Argentina if push comes to shove. Though Columbia my first choice. Then I'd be really dead soon.

The world is what we fashion it into. Which is why Trump should relocate to Disney Land. Not that I'd pay for a ride. Someone else will.

As to your mask: You don't (yet) look like a rabbit startled by the head lights.

If everyone can remember the ones that got caught lying for Trump was sent to jail, fired for not lying. This orange dog doesnot have Covid. Nor does his lying ass wife and the white house crew. Somewhere down the road, all this will come out like all the other lies and the crew who lied with him. Now they are telling all. That dog ass liar is trying to win on a sympathy card. I will reapeat myself today. If they don't have it, they need to have it.

That's a well fitting mask, not gapping at the sides. 2020 has been quite the year for work group photographs.