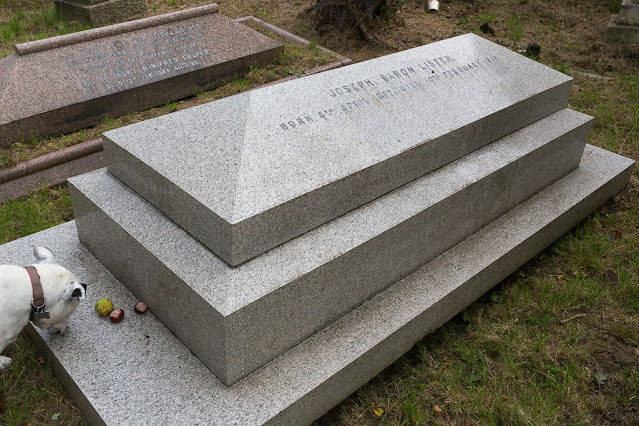 Wikimedia, which hosts Wikipedia and an online database of copyright-free media files, is running a competition this month in which it asks photographers to take pictures of historic monuments. I contributed a couple of photos a few weeks ago, and realized that many of the monuments in my area that had not yet been photographed are in Hampstead Cemetery.

So yesterday, on my daily outing with Olga, I brought the camera and filled some gaps in Wikimedia's monuments database. It was interesting to see which graves and headstones are considered most historically significant; I learned a lot about the cemetery and who's buried there.

Above, for example, is the rather nondescript tomb of Dr. Joseph Lister, who developed techniques to prevent infection during medical procedures and is often considered the father of modern surgery. (Listerine was named after him.) Someone left a few chestnuts on his grave, to show they'd visited; Olga thought they might be treats.

I bet I've walked past Lister's grave a hundred times but I had no idea that's who was buried there. 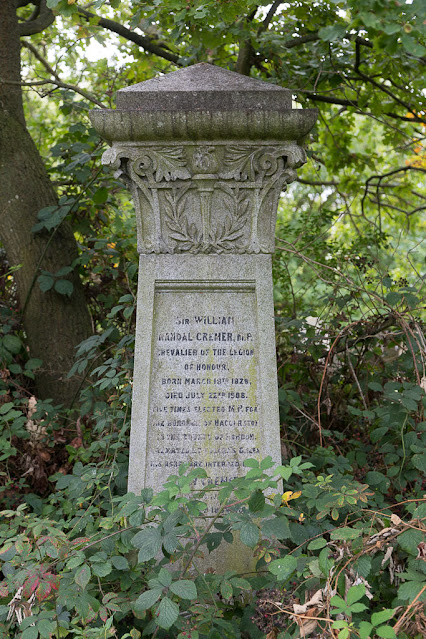 This one, the grave of Parliament member William Randal Cremer, is buried in foliage and in an area where you wouldn't see it unless you went looking. Cremer was a pacifist who won the Nobel Peace Prize in 1903 for his advocacy of international arbitration. (Apparently others weren't listening, as World War I broke out not too many years after his death in 1908.) 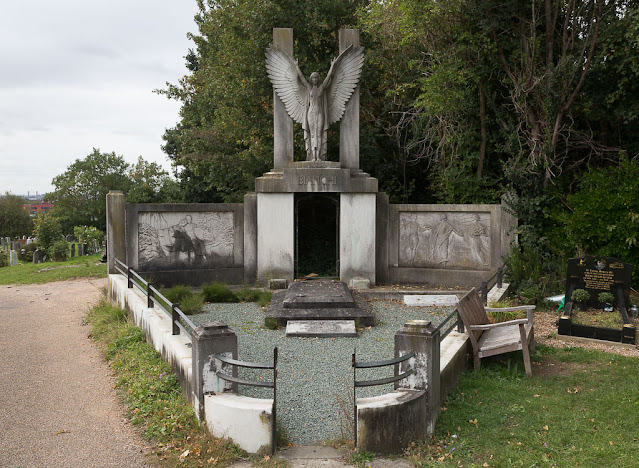 This, on the other hand, is a very conspicuous monument, probably the cemetery's largest. It was erected by an Italian chef to his wife, Martha Bianchi, who died in childbirth in 1936. On either side of the dark central doorway -- which simply leads to the back of the monument but surely must represent a passage to the beyond -- are relief panels showing the couple with their baby, on the left, and Martha Bianchi being escorted to heaven by angels, on the right.

As if the images above aren't sad enough, the Bianchi family endured further traumas in World War II. The whole harrowing story is here. In the end Cesare Bianchi wasn't even buried with his wife in their monumental plot.
I've photographed this monument before but I never knew the story behind it. 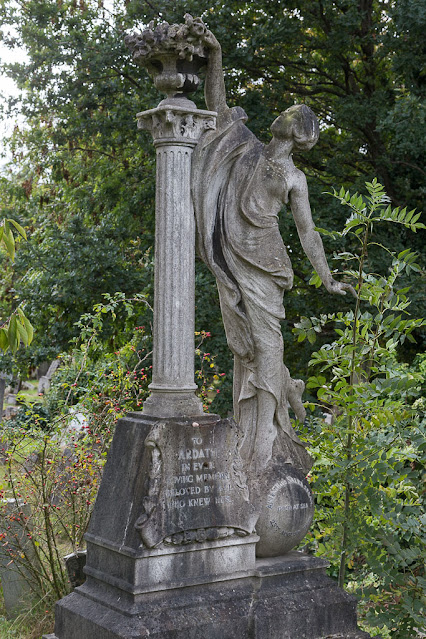 This is the monument of Ardath de Sales Stean, an American dancer who died in 1928 while crossing the Atlantic to England on the White Star liner Homeric. Newspaper accounts at the time said she died after an "operation," so whatever happened onboard the ship must have been sudden and unexpected. More here. 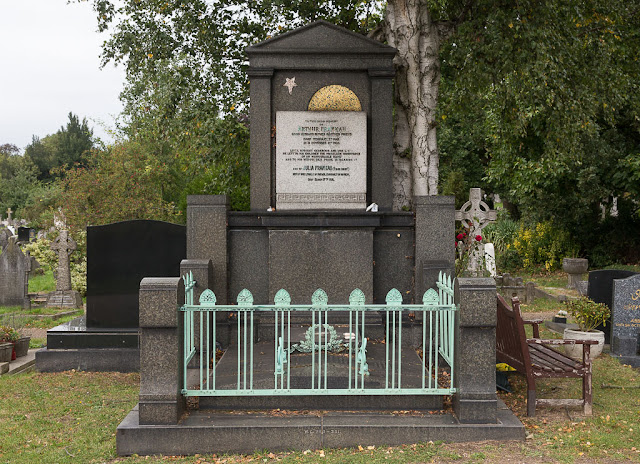 This is probably my favorite grave in Hampstead Cemetery. It's the tomb of Arthur Frankau and his wife Julia. The Frankaus were prosperous dry goods merchants who eventually got involved in marketing tobacco products, and Julia was a novelist who wrote under the pen name Frank Danby. Their son Gilbert also became a novelist, as did their granddaughter Pamela. I love the black granite, the mosaic sun and star, and the clean lines and railings. 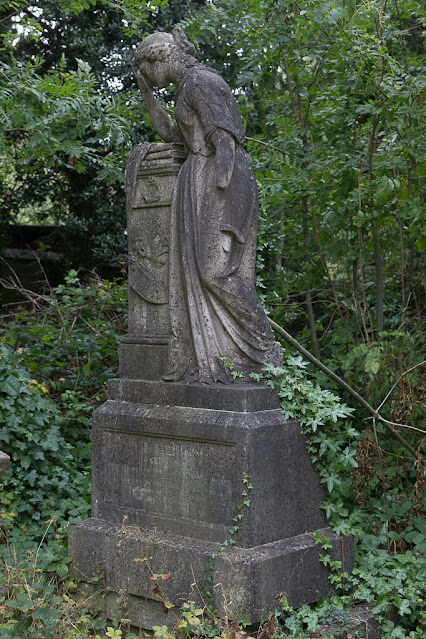 Joseph Maas was apparently a renowned opera singer. A tenor, he died in 1886 at the age of 38, after he caught a cold that developed into rheumatic fever. 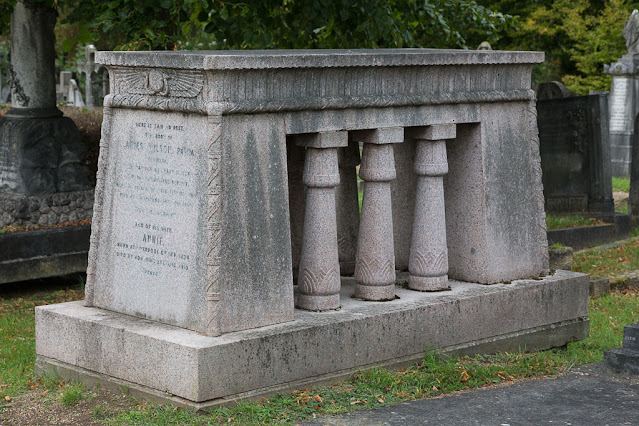 Here's the Egyptian-style tomb of James Wilson, known as Wilson Pasha, a British engineer who spent more than 40 years working for the Egyptian government. 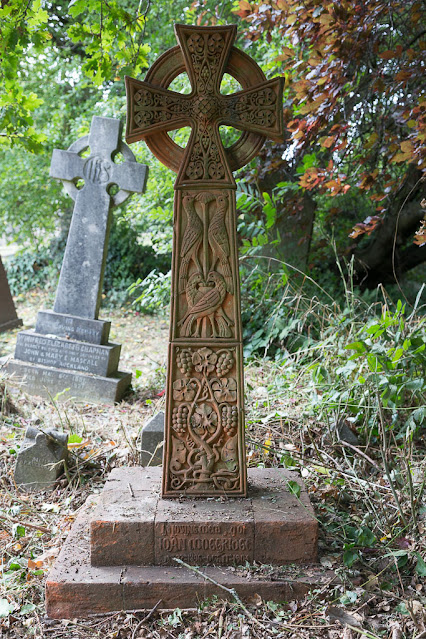 And finally, there's the beautiful terra cotta Celtic cross grave marker of Joan Moggridge, who was eight years old when she died in 1904. The listing notes nothing about Moggridge or her family; only that the memorial is "a fine example of its type."

These are not all the historically listed graves in the cemetery; there were several more. They made for a very interesting walk!
Posted by Steve Reed at 8:14 AM

Fascinating tour Steve. Thanks for sharing your pictures. Old graveyards can teach us so much - even when the gravestones speak of very ordinary people. I have often thought of visiting Highgate Cemetery where, amongst others, the great Karl Marx is buried. I know that his grave has been vandalised many times but I still love the guy.

So much history to find. Thankyou

I am thinking, and yes there is one within our five kilometre limit where I could walk around an historic cemetery. They can be such sad places, especially when you see children's graves.

Fascinating post and project. I love exploring old cemeteries. Great research. Thanks for sharing the links. I'm about to follow them.

That is one definite plus to being buried in a cemetery as opposed to being cremated and sprinkled somewhere- there is a monument of some sort with your name and dates so that if future generations want to know more about you, it is easier.
What a sad history for the Bianchi family.
If we ever get a chance to meet up in Cozumel again, we shall have to take a trip to the cemetery together. It is a very rich experience.

it's a shame modern cemeteries are so devoid of monuments and interesting sculpture.

You had to do some research to find these graves and their importance.

The last picture of the Celtic cross is my favourite. We used to love to walk around our cemetery but not any more.
Briony
x

Fascinating, going to follow all the links you posted...thank you for the time you put into this.

This is exactly why even though I want to be cremated I would still like a gravestone - so much history! (Note - I’m unlikely to have a gravestone because of my beliefs about taking up that space on the planet, but still...)

Interesting all of them and tragic. wonderful cemetery and photos. When Erik was about five years old he told me that he would buy an amethyst monument for me with rainbows and diamonds that go all the way to the center of earth where it would branch out into flowers, not the plastic kind.. i asked what his dad's would be and he said, "brown". So I am holding him to it! Thanks for the great post and links. Fabulous!

Fascinating stories. There is a lot to learn about the people buried there. The gravestone monuments are truly amazing. I love the one for the dancer.

I love all these memorials, but my favorite is the one for Mrs. Bianchi. It's so interesting to learn the stories behind the stones. Enjoy your day, hugs, Edna B.

Thank you for the mini-tour. I love cemeteries. Here in Cleveland we have Lake View Cemetery, which is just spectacular. Love to walk around and look at the headstones, etc. Plus, you can bring your dog. So many cemeteries in this area do not permit dog walking. I know I would never want to be buried in one of those places. Take care; stay safe!

I love the last photo but it's very cool that Dr. Lister is buried there. He'd be so proud to see so many people washing their hands now.

A very interesting walk. Lots to look at and plenty of sleuthing.

A monumental post! I know of Lister but not the others. The Celtic cross appeals to me,lots of info in this post. Thanks to you for taking the time and effort needed for this post.
Alphie

These are fine!
Jenny