Indian Summer, or Not 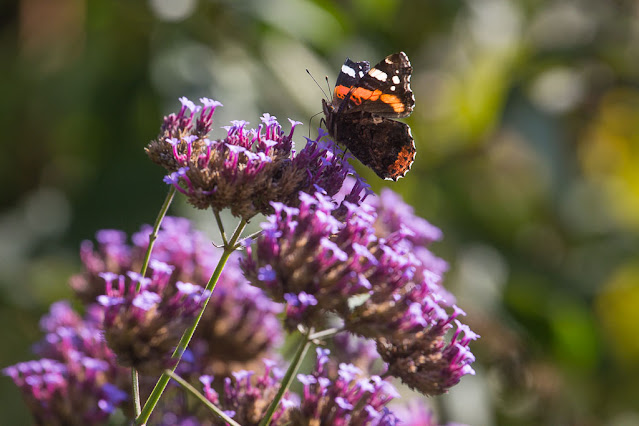 We're due for a warm spell this week, and yesterday's weather was so beautiful -- sunny with temperatures that were just about perfect. A red admiral butterfly returned to the garden, settling on our verbena, and Dave and I watered plants and mowed the lawn.
I was going to write that we were having an Indian summer. Is that term racist? Dave and I were wondering. I found an interesting article on Slate about its origins, and the authors acknowledged it has a rather colonial flavor. They proposed calling it "second summer" instead.
Although Indian summer is the North American name, apparently in Europe that second summer is called other things, often after a saint (depending on whose feast day it falls near) or "old wives' summer."
But in any case, I guess this can't be an Indian summer, because they occur in autumn. And technically, until Sept. 22, it's still just summer. So I'm getting ahead of myself. 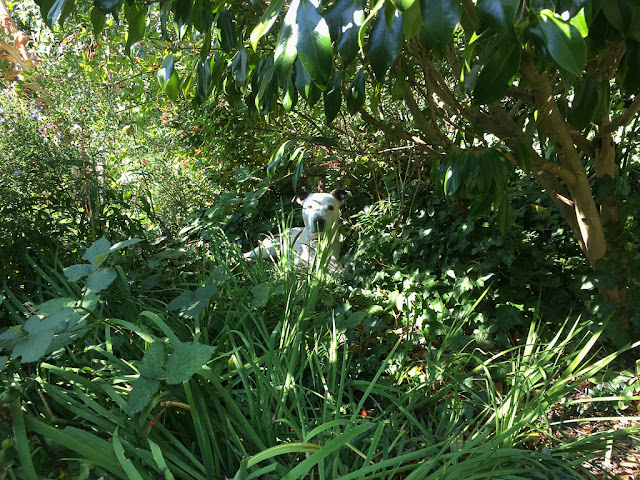 While we worked in the garden, Olga lay amid the ivy and irises beneath the camellia bush. She's so funny. I've never known her to lie in that spot but I guess the shade appealed to her. 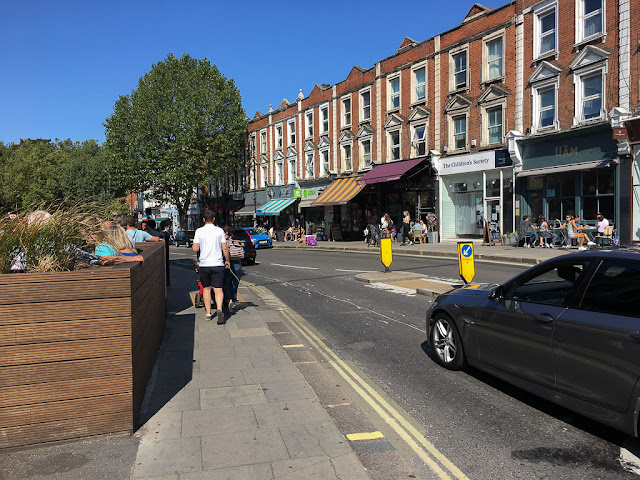 When I walked her later, there were tons of people out on the high street, sitting in all the cafes. I think every table was full. As usual, my iPhone shot doesn't quite capture how busy it was -- partly because all those people on the left are hidden by a planter.
New rules come into effect today specifying that people in England can't gather in multi-household groups larger than 6 people. Our Covid-19 numbers have been climbing, so this is an attempt to nip that in the bud. Maybe people were getting their socializing in before the tighter restrictions? (Of course that rule doesn't apply to schools, so it will be work as usual for me!) 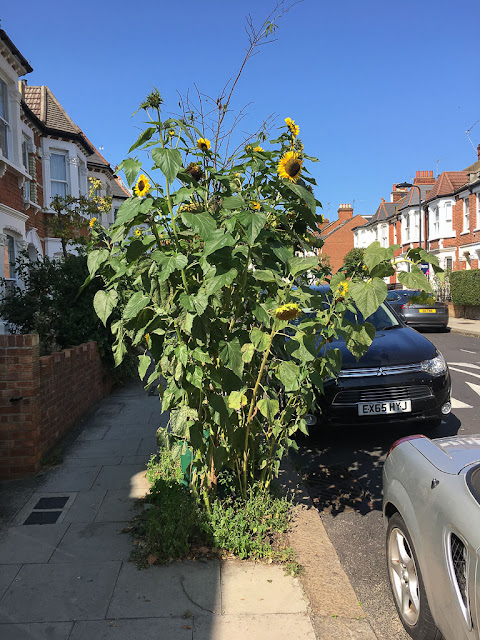 Olga and I came across several large stands of sunflowers on some nearby streets. Pretty impressive!

I attempted another plant rescue -- some ferns I saw in a rubbish skip in front of a neighbor's house. I guess they're clearing their garden. The ferns had roots attached, so I grabbed them and planted them behind our garden bench. We'll see if they survive, and if they don't get dug up by foxes. (We have a hydrangea back there that the foxes keep excavating -- I suspect it was grown using bone meal, which, as we've seen, the foxes love.)
Oh, and Dave used our beans and peppers to make vegetable soup that we ate this weekend. He thought it was bland, but I liked it.
Posted by Steve Reed at 6:42 AM

I have never seen sunflowers growing in the street like that...what a lovely thing!

I am a bad person for thinking naughty thoughts about a Red Admiral settling on your verbena.
We use the term Indian Summer here too. I would have thought it came from England when it had colonies.
Your COVID numbers are not just rising but very badly so. With our lockdown, masks seem to be best thing.

"Altweibersommer" indeed. Though do associate it more with mid/late Golden October. September, to me, is late summer, October is autumn. And November is my nemesis.

In the pursuit of (misguided) political correctness I do believe that we may lose some of the poetry of descriptive language. "Indian summer" sounds evocative, colourful. "Second summer"? A pale shadow of the real thing. As sterile as The Planet compared to the image of a fecund Mother Earth.

Mistakenly, I thought "Indian Summer" had come about as a reminder of India having been part of the British Empire. Instead, as you say, the term refers to the original inhabitants before Christopher Columbus spoilt it all by "discovering" America. In my earliest teens I read an awful lot of books (fiction) on Apaches. If I remember correctly they tended to fight the Sioux and other tribes. One of my first crushes was Winnetou (don't ask), friend of Old Shatterhand.

This is as good an opportunity as any to say that, apart from all the other reasons why I enjoy your blog, it's an oasis of tranquility, peaceful. And hats off to photogenic Olga for being such a dab paw at using your fauna as a perfect foil.

I always thought the term "Indian summer" had its origin in the term "Indian giver," which is definitely racist and, besides, not based in fact since European settlers were the ones who gave and then took back and gave something different (if they gave at all). But from what I've read, it doesn't appear to mean what I thought. Either way, I avoid using it now.

We've got a 40 percent chance of rain today. We had a day like that last week that came to nothing, but it's up to 80 percent later in the week. I'm so excited.

I don't think we have Indian Summer or any other type of second summer in Florida. We just have hurricane season and then winter.

Just looking at your photos and remembering what it was like to see a blue sky like that. I had forgotten. Here it is just smoky gray with no change in light at all during the day. A dull unhealthy atmosphere in so many ways. We don't have Indian summer, we have fire season, and this one is insane.

Yes, I've wondered about the term Indian Summer. Now I'm going to have to look it up.

To complicate things: the weiber in altweiber is not related to weib (woman, wife) but to weibern (weaving) and the term altweiber refers to the old webs, the spiderwebs left behind by the last of the summer's spiders.
But never mind, it's actually putting spiders down because of their age.


Olga is impressive as always.

That is a lot of people out on the street and sitting so close together. I heard on the news this morning about the new rules in England. I'm waiting for a surge to happen here after the holiday weekend. We'll see. I went to a Farmer's Market on Saturday and found it to be way too crowded. I visited one vegetable stall and decided to leave. Interesting comments about Indian Summer. It's such a common phrase that I hadn't thought about it before. I'll have to check that article about its origins.


Yes, it does look like social distancing is not being enforced at the sidewalk cafes. Tsk, tsk. Tell Dave he might throw a little cayenne in his soup next time.

I've pretty much quit using any language with "indian" in it. We've switched to First People or Native Americans. The Canadians use First People, and I like it better, I think. Not that what I think is of any import.
Is Boris Johnson losing popularity with the populace given his poor handling of the pandemic as well as reneging on previous Brexit agreements?

It's always been called Indian Summer here, so that's what I'll stick with. After Fall starts, of course. I am very politically UNcorrect and I plan to stay that way. That's a really cute photo of Olga relaxing in the shade. I love the sunflowers that are growing on the sidewalks. Dave's soup sounds delicious. You have a wonderful day, hugs, Edna B.

I have always called a late summery spell an Indian Summer and I am sticking to that. "Second Summer" is less poetic, less evocative of times past when summers bloomed again. Regarding politically correct use of language, a friend asked me recently in all seriousness how he should refer to black people as he had been told that the term "black" is racist. Lord help us!

I was surprised that you wrote that all the cafés were full, and with Covid numbers on the upswing. I can't wait until all of this is over! I've never seen a sunflower on a street like that.

Whoever planted those sunflowers, even if it was from birds, it's brilliant. They are lovely. And Olga looks very regal.

I have that same verbena and yesterday two frittilaries were all over it.

It's always been Indian Summer here too and I'm sticking with it. I think it's a stretch to call it racist. I know that 'indian' is an incorrect term for native americans but then 'americans' is an incorrect term as they did not call themselves that either. first nations is the most correct term I guess. and more, why would a late warm spell be associated with the first nations, or even India, anyway. actually it would probably be more accurate as in India since they are further south and warmer than us, so to me it's just a word, a sound, attached to summer that describes a late warm spell.