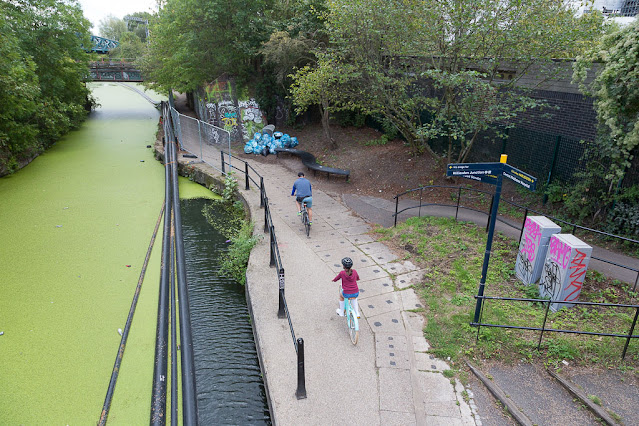 A momentous day yesterday -- my first use of public transportation since mid-March! I decided to take Olga to Wormwood Scrubs, and in order to go there we need to get on the Overground. Many of my colleagues are using transport to come to work each day, and I figured, if they can do it every day, I can do it once. (Well, twice -- once there and once back.)
Olga and I were happy for the change of scenery and the opportunity to walk along the Grand Union Canal (above), paved with bright green duckweed. There were tons of bicyclists zooming up and down the towpath. I read that bicycle sales skyrocketed during lockdown, so maybe I was seeing evidence of that. 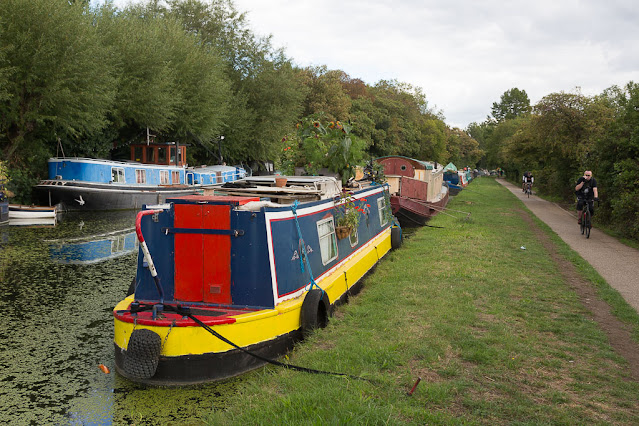 It's always colorful along the canal. Dave and I watched an episode of "Gardener's World" the other day that featured a person who gardens atop a narrowboat in this area. I couldn't figure out which boat might be hers, though -- if it's even still there. They do move around. (For example, I saw the "Success!" boat that I noticed while walking the Capital Ring last summer!) 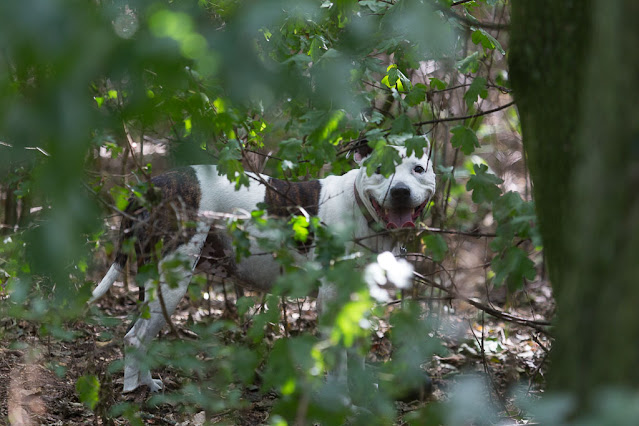 Olga was very insistent that we stay on the canal and we walked much farther than we normally would -- all the way to Ladbroke Grove. (I'm serious -- I tried to take our normal turn from the canal directly to the Scrubs and she planted her paws and refused!) We then cut back toward the Scrubs through the neighborhoods of North Kensington. We didn't do a full circle of the park because by the time we got there Olga was getting tired -- but as you can see, she was very happy. 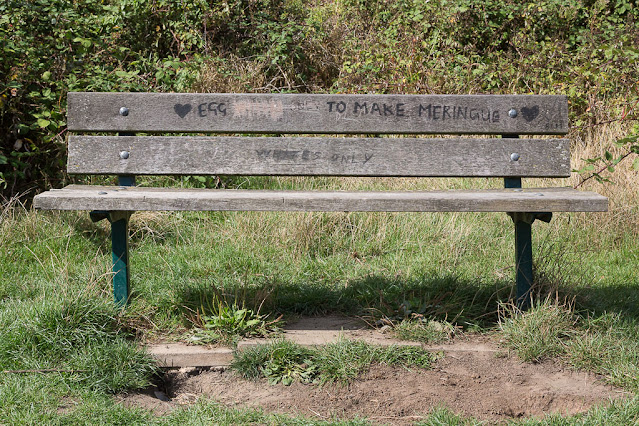 Someone left appalling racist graffiti ("whites only") on this bench and someone else turned it into a recipe: "Egg whites only to make meringue." Brilliant, if you ask me. 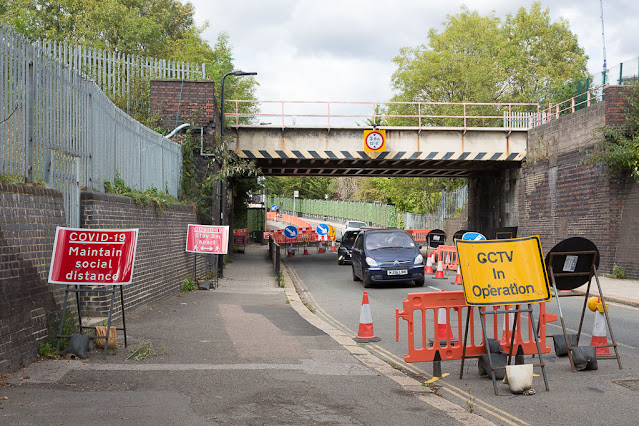 We walked back to the rail station along Old Oak Common Lane, which like many roads in London is a snarl of traffic these days. Work crews are laying cable for faster broadband (or something) and traffic diversions like this one are not unusual, complete with road signs reminding pedestrians to social distance.
The good thing about the Overground trains is just that -- they're above ground and they have some circulating air. They're also wide compared to the tube. So I felt pretty safe on them. (Everyone is required to wear a mask on London public transport, and fortunately I only saw one person doing that useless below-the-nose thing.)
Posted by Steve Reed at 7:44 AM

On those narrow towpaths it should be one thing or the other. Cycling and walking should not mix when the path is so tight. I bet there are plenty of collisions. Another thing - if I ruled the world - all bicycles would have bells on the them to forewarn pedestrians of their approach.

Ah yes, the below the nose people. I shan't swear about them.

I seem to remember there is a prison at Wormwood Scrubs?

A long walk will do you no harm. Well done Olga.

The overground train stays above ground until it is at Whitechapel where it goes under the Underground Tube.

Another excellent walk! Olga!!! such a happy girl. Loved the click back, Such a wonderful town, London! Tin and huge that sort of illusion of bigger on the inside. It is just fine how you get out there and take the most wonderful photos. You certainly make London look desirable.

Glad you and Olga had a change of scenery.

I've read a few other UK bloggers complaining about the cyclists speeding down the tow paths almost mowing down people who are walking. Very difficult for dog walkers. As YP suggests, the paths should be used for one thing or the other to avoid injuries. Or, if possible, have specially divided lanes for each purpose. Think they have the same issue on the C&O Towpath in Washington and the trail that goes from DC down to Mount Vernon.

What a nice day! I find it extremely funny that Olga refused to take your normal turn. She knew what she wanted!
Do the people who live in the boats ever GO anywhere in those boats or do they stay tied up at their particular berth for eons?

Until last year I was one of those cyclists zooming up and down. Here we have much less of a population so our trails are not busy with traffic.

The change of scenery must have felt great! I love that photo of Olga. She does look happy. I heard an interview on the radio with someone saying that public transportation would be safe if everyone wore a mask and no one spoke. The trick is getting everyone to do that. That below-the-nose thing is quite prevalent here.

Looks like a wonderful place for a walk. I'm glad you and Olga got to head out on public transit feeling safe and adventurous. Nice editing of that racist graffiti.

Olga does look very happy with herself. Such a neat photo of her. I'd love to spend a couple weeks vacationing on one of those boats. You have a super day, hugs, Edna B.

I'm a cyclist. We stay off mixed use trails on weekends because there are too many people walking. It increases my chances for survival as well as theirs. The scariest thing we see riding are little kids on bikes with pink tires; and dogs being walked with those leads that can be extended so that the dog is on one side of the trail, and the owner is on the other. Weekdays are much calmer.

I find those narrow boats so charming and have never seem them "live." Can't imagine spending much time inside one, though. I love how Olga calls the shots.