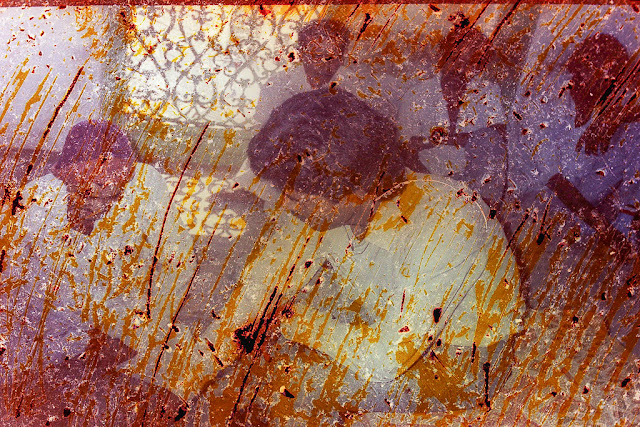 Wow, am I ever running late today! I just woke up about ten minutes ago, and I have to leave the house at 7:30. So this is going to be a very short post.

You'll notice that today's pictures are a bit unusual. When I was walking through St. John's Wood on Tuesday, I saw a strip of negatives lying in the street. It had been run over by cars and probably got wet in the rain, but it was so surprising to find film lying around that I couldn't resist picking it up. I brought it home and put it through my negative scanner. 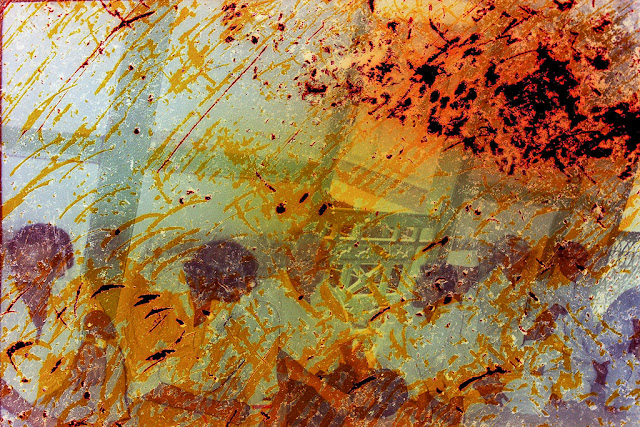 I'm thinking these were taken in South Asia, maybe India or Pakistan, and it looks like some type of celebratory gathering. I believe there are only men in the pictures, which suggests a country where the genders are separated for such events.
There's something cool about rescuing one-of-a-kind images that could have been lost forever -- even though these are so damaged they're pretty much lost anyway. But hey, some artists really try for this distressed look. In New York you'd pay money to see work like this!
Dave and I had a funny experience last night. We were trying to open a jar of Mexican tomatillo salsa, and neither of us could do it. We used towels and oven mitts; we braced it on the floor. We tried and tried and that jar lid would not budge.
"We're so gay!" said Dave.
I replied, "Are we gay, or are we old?"
(The obvious answer, I suppose, is both.)
We belatedly saw a little note on the lid of the jar: "If lid is stiff, please tap the lid on the side." Clearly the manufacturers knew this could be a problem. So I got a knife handle and tapped all around, as hard as I dared without endangering the glass. And it worked! The lid finally popped off. The salsa was actually made in Mexico -- maybe they seal it up tight to ensure it survives its overseas journey?
Posted by Steve Reed at 7:07 AM

The negatives and texture on them are great! As for the lid-if you run one under very hot water it usually works. I always do that for acrylic tube lids which always stick!

Not gay. Not old. And NOT jar opening aces either! This made me laugh. Can’t believe neither of you ever heard of tapping the side of the lid with a knife. My delicate MOTHER born in 1927 used to do that all the time.

Oh, by the way, those photos are wonderful works of art. Great job!

I am not gay so here's a heterosexual tip from me for opening lids that won't budge. Carefully and gently pour hot water all round the lid - best to hold the jar on its side. Try to get as little water as possible on the glass. Thirty seconds of this hot water trickle should expand the lid sufficiently so that when you next try to turn it with a cloth that grips the lid will not resist. Voila! Always works for me.

Those photos are beautiful. Probably made more beautiful after being run over.
Briony
x

In their almost destroyed state they are kind of nice photos.

Buy one of those grip jar openers for when your weak faggot muscles won't open a jar. 😉 We have one.

You are too benign, Steve. The Mexicans screw their tops tight to keep gay guys overseas from opening them. Forget the hot water tips. One of you - the jar, you - will be hurt. Do as Andrew suggests above: Use the side (looks like a hook) of a tin opener, and ever so gently, to loosen the vacuum. It worked for me when I had two broken wrists (at the same time) in plaster cast.

I am so happy to find that I am not the only one who picks up odd and discarded objects. A few years ago I walked across an open space carpark with a pack of poker cards strewn all over the place. Oddly, all face down. I picked up four. Took them home. Still with me in a prominent position across my desk. One the Ace of Spades, the Death Card. You may wish to listen to Motorhead's (Lemmy) song of the same name. Though may be that it's not quite up your gay (fun filled) street/streak. Still, do remember that Beethoven is considered the father of Metal so you may find a redeeming feature there.

As to the colours of that amazing find of yours, I have a scarf (my favourite one) on exactly that spectrum.

Funny that the salsa company gave you instructions on how to loosen the lid!
I seriously doubt that the Mexicans are out to hurt anyone as Ursula suggests. But yes, just break that seal and the top will come right off.

At my age jars are becoming harder and harder to open...frustrating.

As a skinny old straight person, I have always opened those tight jar lids with a little tap from a butter knife. The other day though I had a jar of honey that absolutely would not open, not with any of my attempts. Roger had to do. Maybe my orientation is changing I had not considered that. LOL!

Interesting find with those negatives. They do have an artistic look with all those scratches.
I love that story of opening the jar. That happens to me all the time but I've never seen one with instructions before.

Those negatives sure are interesting. I have trouble opening some jars too. Bottles too. With me, I do believe it's old age. My hands just aren't as strong any more. I do the tap with a knife thing too. You have a fun day, hugs, Edna B.

Those are fabulous negatives. YES, blow them up on canvas and they would be much sought after. Hefty ticket price! The colors are perfect, I really love them.
As jars go, i have an old bottle opener with a lip, relieves the grip of the lid every time. Even Dennis who has a mighty hand and is not gay can not undo jar lids without the bottle opener.
Oh , and just so you know over there in relative safety- the orange lunatic is getting loonier by the minute, expect your homeland to be torched before he is out of the house! --Thought King George was nuts?

Judy calls on me when she encounters a lid that she just can't budge. I can usually open it but we got one of those adjustable grippers from, I believe, OXO to make the job easier.

I always tap the lid with a knife if I can't open it. It mostly works, but we have a special jar opener in case Mike isn't around & the tapping doesn't work.

I love how those negatives look - you're right that people would pay cash money for that art!

Only you would pick up those negatives :) .
I found the background fascinating, the cast iron (?) work on the balcony and the fact their gathering was on the first floor.
Alphie

late to this party but I always bang the edge of lids on the counter when they are stubborn. usually just take one good tap, maybe two. works every time.

My favorite photo things to find in books are old Polaroids.
I've never found negatives--love that you ran these through a scanner--gorgeous!