Gazanias, Beans and Another Population Screed 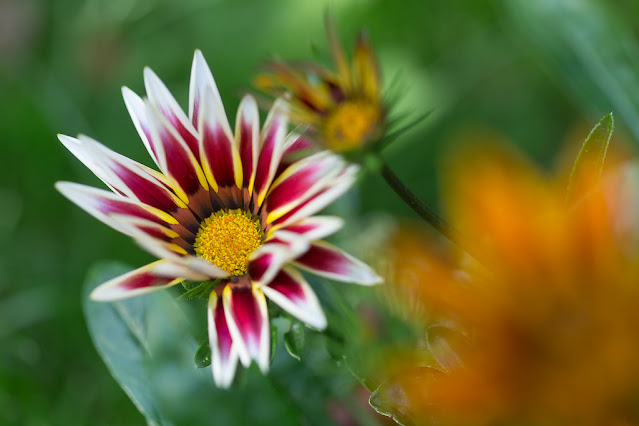 Our gazanias are finally blooming up a storm, despite only intermittent direct sun. We're supposed to get much warmer temperatures at the beginning of next week -- into the mid-80's (F) during the day. They ought to be happy with that. Our canna lilies put out some buds, but then the temperatures dropped and they never flowered. I think the buds are dead now, but we'll see.
Did you see the news about the recent WWF/ZSL report that found humanity is destroying wildlife and wilderness areas at an unprecedented rate? Wild animal populations have dropped an average of 68 percent since 1970, and an astonishing 94 percent in Latin America. Humans are now overusing the Earth's "biocapacity" by at least 56 percent -- meaning we're taking far more out of the planet than it's able to regenerate.
The report attributes this to "an explosion in global trade, consumption and human population growth, as well as an enormous move toward urbanization" in the last fifty years. Biodiversity and animal populations have fallen on every continent -- 65 percent in Africa, 45 percent in Asia and the Pacific, 33 percent in North America and 24 percent in Europe and Central Asia (which I'm guessing had less biodiversity to begin with, considering its longer history of industrialization).
Most of this has occurred because of changes in land and sea use and habitat destruction, including intensive farming and overfishing. Direct exploitation of certain species through hunting and poaching is also responsible.

The report maintains we can turn the tide on biodiversity loss, but it will take "a global, collective effort...increased conservation efforts are key, along with changes in how we produce and consume our food and energy." While I don't doubt that is true, particularly regarding responsible farming, fishing and land use, I think the report pulls its punches when it comes to human population control. (I confess I haven't yet read the whole thing, though I intend to.)
When I was born in 1966, the human population of the planet was about 3.4 billion. Now, merely 54 years later, it has more than doubled to 7.8 billion -- and it's steadily climbing.

I don't see how we can have a conversation about saving the planet and all the creatures that live on it unless we also talk about having fewer humans. I know some people find this anathema, but I think there are various "soft" ways to achieve that goal, especially through advocating better birth control (male and female) and family planning, and providing for the education and liberation of girls and women. (Obviously there are cultural barriers to that in some parts of the world, but they must be overcome.)
Otherwise I think we're inevitably headed toward a world that will more forcefully restrict the number of children any couple can have -- similar to China's old one-child policy (which China abandoned in favor of short-term economic gain). I have no idea what that conversation would look like, but I hope we can find less authoritarian solutions. We must, however, confront and discuss the problem. 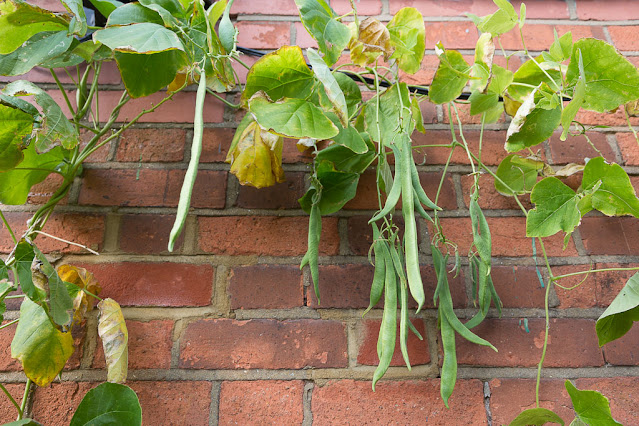 Dave and I harvested more beans last night. This is our bean vine, clinging to the side of the house, where it grows up some twine and along our TV cable. Above is before the harvest... 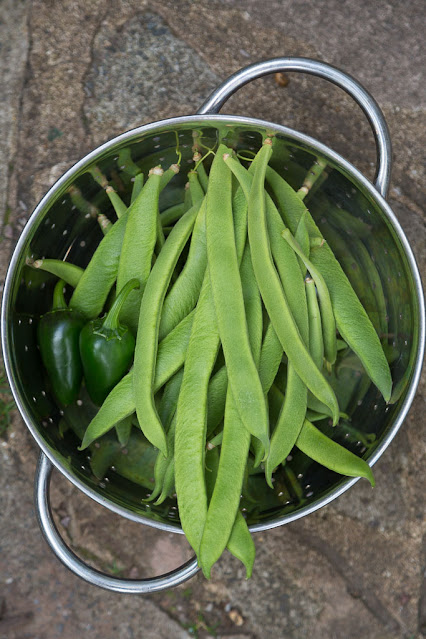 ...and this is after. Dave is pretty sick of beans but I think we can manage to eat our way through this last small haul. We let some of them get too big; the pods are a bit fibrous.
You'll also see two peppers on the left. Mrs. Kravitz gave us a pepper plant, and she said those were ready to harvest, but we have no idea what kind of peppers they are or how to use them. We've got to do some experimenting!
Posted by Steve Reed at 7:57 AM