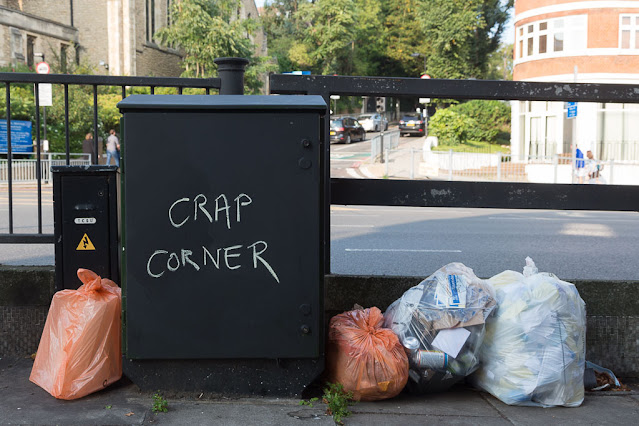 I've complained before about this corner near our flat, which is always piled high with garbage bags. Literally, always. Doesn't matter whether it's trash collection day or not. I was amused to see this week that another equally annoyed person dubbed it the "Crap Corner." So true!

Well, the book delivery changes that I wrote about yesterday aren't happening after all. I walked in to work prepared to make an argument that we should stick with the original plan, and to my surprise my co-workers all seemed to agree. So for now, the middle school librarian will still take the books to the kids and I won't have to deal with them. (Much.)

I'm now writing all the parents whose children are no longer enrolled but who still have library books, to try to get those books back. We'll see how productive that is. Some of them have responded saying they intend to return the items, but others aren't even in London any longer. More than a few items have inevitably gone walking. 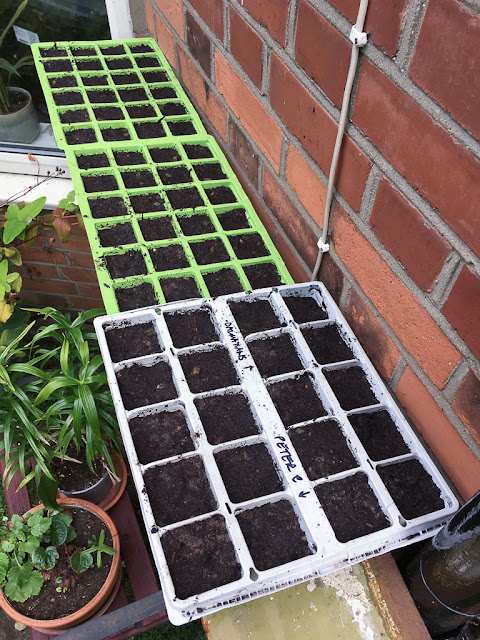 This was my after-work project yesterday -- planting foxglove seeds! I've never tried planting them in the summer, but apparently if they start growing now they may bloom next year. I'm a little late, actually -- August is the ideal time -- but we'll see what happens.
See the tray in the foreground labeled "Peter"? He's one of my co-workers, and I gave him some foxgloves last year which he planted in his garden. They bloomed and I suggested he harvest and plant the seeds. He brought me a bunch of empty pods in a granola bag and said he was disappointed because all the seeds appeared to be gone. But when I looked I found tons of them -- it's just that they're so tiny they're easily overlooked. I planted them and hopefully I can surprise him with some baby plants from his very own seeds.
I should charge a germination fee!
Posted by Steve Reed at 6:50 AM

I wondered what "Peter" referred to! You should actually charge a surrogacy fee!

So glad to read the decision about book delivery.

That Crap Corner would make me nuts.

A good comment on crap behaviour!
I didn't realise how many of your foxglove seeds I had sown...they are indeed like dust!
Glad that the school saw sense

We were once terrified of library fines back when they were legally enforceable. It seems not anymore, or were they ever really?

While I am normally loath to correct anyone's speech, you are writing all parents and not writing to all parents? I think this is American speak, so I understand. Maybe English speaking? I don't know but interesting to note.

"Crap Corner" could be a new album by the girl group Little Mix or the place where Mr Trump likes to deposit the truth about coronavirus. He allowed 27000 US citizens to fly back to America from China and did not prevent hundreds of Chinese citizens flying to The States from Macau and Hong Kong. So much for him saving "millions" of lives. Fake tan, fake teeth, fake tax returns, fake hair, fake reason for dodging the draft - Fake President.

amazing how many plants have such tiny seeds. I recently collected seeds from my penstemon, smaller even that poppy seeds and the seeds from the nun's orchid are literally dust. more amazing that these miniscule things can produce life.

Well, when you think about how small a human sperm and egg are and what they can produce...
You're becoming an amazing gardener, Steve!

Steve, you are a nurturer of growing things and a rescuer of discarded treasures.

I think folks should keep their trash in their own trash container, and not clutter the streets with it. A question, do you leave these little seed planters outdoors all winter or do you bring them indoors for the winter? If I left them outdoors here, they would not make it through the winter. I agree, you do have a gift when it comes to nurturing those plants. You have a super day, hugs, Edna B.

It seems a mystery to me why anyone would put their garbage on the street like this. I can understand your frustration and that of your neighbors.
If anyone can grow those plants from seeds, it is you! I predict big, beautiful plants next year!

I wish you hadn't mentioned garbage. It's the one thing that brings the social commentator out in me, exasperated.

Your corner is nothing. It's looks like an installation. A bit like Tracey Emmin's bed. Messy but contained. Myself? I have neighbours who can't read; say, glass only, household waste only, recycling. Nah, just pile it on. With abandon. Leave the lids open. Let it spill. Enter the seagulls (I live a stone throw from the coast).They'll pick it all apart. Plastic bin liners and all. Whilst squawking. No, make that shrieking.

I am a calm person, patient. The unthinking and inconsiderate disposal of rubbish by my fellow humans stretching both calm and patience to the limit. Combine that with the Council now collecting rubbish only every two weeks - come midnight, ooh, look there is a mouse! Or is it a rat?

Before you jump to a conclusion: I do live in what is considered an "upmarket" area - with prices to match.

Your seedlings a much needed relief, good luck,
U

Isn't there something called a "bin" in England? And don't these dumpers have access to one? Maybe they should be planted under the seeds.

Get your chalk out Steve-'Rubbish Retreat or something but with neater handwriting!

I hope the foxgloves seeds sprout. I planted a foxglove this year, I'll see what happens to it in the spring. I haven't had much luck in the past with them.

It drives me crazy that people are too fucking lazy to put garbage where it belongs. Or pick up dog poop. But I'm already a little crazy anyway:)

I love your rows of seedling trays - it's a great photo & I can't wait to see the little seedlings.