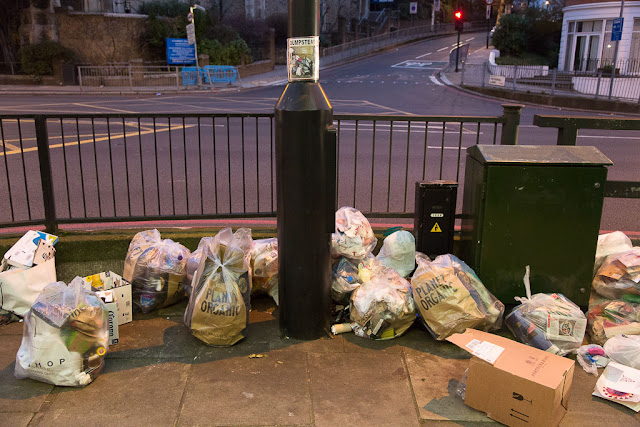 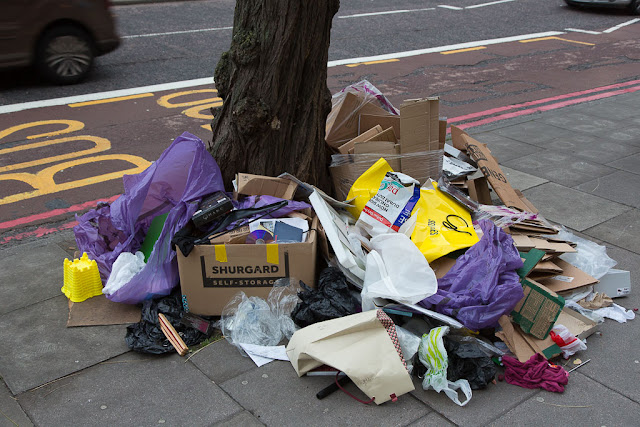 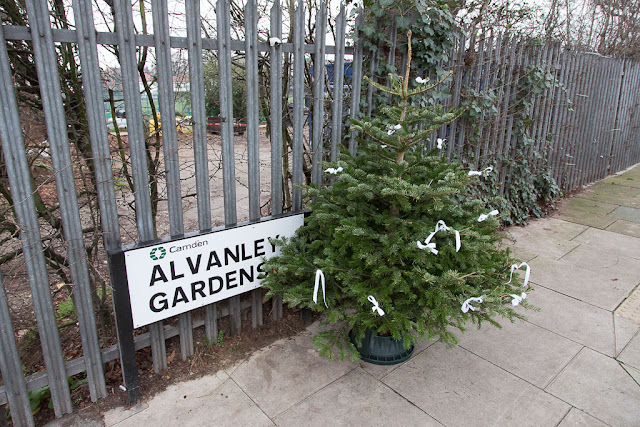 God, this sucks. I'd be beyond annoyed as well. I never would have expected London to be like that! I think of the pristine streets of Zurich -- how do the Swiss manage it?

A great rant which I applaud as I am also someone who gets very annoyed about litter and fly-tipping. Councils like Camden operate on very tight budgets because of the meanness of our national government. However, up here in Sheffield there's very little litter and most fly-tipping happens out in the countryside.

Keep ranting!! This is important, to get people to care..but not easy to see how.

What is wrong with people?? It's too bad the installing hidden cameras is so expensive because I'm all for filming people in the act, and then naming and shaming.

Ugh - very annoying! Too bad you can't ship the trees to the countryside - I have a friend in Iowa whose goats LOVE Christmas trees. Hey - maybe you & Dave should get goats!

Also, fly tipping? That sounds like cow tipping, only on a MUCH smaller scale :)

Human beings suck. we have trashed this whole planet one way or another. except the Portuguese. Portugal was spotless. I did not see one piece of trash anywhere the whole time I was there and we saw quite a bit of it from big city to small village. I can see where it would be hard to dispose of your trash properly if the city doesn't provide containers. it's a no win situation. how on earth do they think that no containers will stop people from setting out their trash?

I think you should send this post as a commentary to the local paper. Is there one? That's ridiculous. Is waste management mob-controlled there like it is here in so many places?

I am remembering that back in the seventies and eighties when the IRA was very active there were several terrorist incidents of bombs being left in trash cans and after that the city of London removed most trash receptacles from street corners. Am I misremembering? I distinctly recall this as being a thing. I think you may have inherited the unintended consequence of that attempt to safeguard lives.

I'm surprised! I did a book for teens about the history of toilets and featured London as the STAR CHAMPION of public sanitation and public health. Of course, London was also the worst in the first place...

What would John Snow do?

Speaking of... if I ever get to London again, I want to go to the John Snow Pub--near the site of the original Broad St. pump. Have you ever been?
https://www.ph.ucla.edu/epi/snow/snowpub.html

It seems to be a durable feature of human nature that we are (most of us) only as good as it's easy for us to be--it's a matter of Good Government to make it easy for humans to do the right thing.
It sure doesn't pay for governments to shirk on public health!

I'm really surprised by how crazy the waste "management" system is there. That's insane. We get a lot of discarded crap left around this university town, but garbage pickup is pretty neat. Every house/apartment has cans and everything. The garbage trucks have motorized levers that pick up the cans and dump them right into the truck. I can't imagine people just putting their bags of garbage on the street. I'm sure the rodents love it.

P.S. "Frex" (above comment) is Fresca (nicknames for me, Francesca)

Tell it like it is, Ranter! Give 'em what for.

I am very surprised by this. My impression of London and the UK as a whole was that ya'll were very civilized and would not resort to fly-tipping. Tucson has a problem with a culture that throws trash out of vehicle windows, to include glass bottles, plastic shopping bags and spent nitrous oxide containers.

I had no idea about the trash problem being so widespread in London. I thought the pockets of trash you have photographed and blogged about were the exception. Interesting. And, when you live there, a major turnoff, as you have shown.

Elizabeth: The article in the Hampstead Village Voice makes that exact point -- how is it that Munich and Copenhagen and other European cities are so clean, and we're struggling?

GZ: Especially since we've all seen the damaging effects of trash that floats freely out in the world -- getting tangled around the neck of birds or ingested by whales.

Vivian: Well, interestingly, London is supposedly one of the most comprehensively filmed and photographed cities in the world. There's CCTV everywhere. But no one puts a priority on looking at the footage to catch litterers.

Bug: Goats will eat a pine tree?? I had no idea.

Ellen: Yeah, the lack of containers is a mystery to me. I just don't get the thinking.

Ms Moon: Yeah, there are several local papers, and they've written about this topic, too. I don't know about the mob control. The contractor in charge of keeping the streets clean is Veolia, which I think is a French company. (Wonder if they'll survive Brexit?) There are also guys with hand-carts and brooms who walk around manually sweeping up trash, but of course they can only visit any given street every once in a while. We need about a million more of them. (Or a more efficient trash-collection method.)

37P: Yes! I think the lack of public trash receptacles IS part of the IRA legacy. But now, in tube stations, they have handy hoop-shaped frames from which they hang clear plastic bags, so you can plainly see what's inside. Seems like there are ways around the terrorism risk these days.

Frex: I do not know the John Snow pub! Yes, I absolutely agree -- the government should be making it much easier to control this problem.

Robin: It seems to me that most individual houses and some flats (like ours) have their own bins. But larger buildings apparently don't, at least in some cases. The tenants just set their bags out on the street. There is no enforcement of any cleanliness law, at least not that I have seen. I suspect the thinking is that it costs more to enforce than it's worth.

Red: I would definitely love to be in the room when these maters are discussed.

Catalyst: The question is, will anyone in a position to change anything read my ranting? Probably not!

Allison: Car cultures often have littering problems -- we had the same in Florida, and I didn't understand it there, either. I think some parts of London are cleaner than others. The residential streets in Hampstead, for example, are largely spotless. It's the business areas, the high streets and any blank streetside walls that tend to be a problem.

Jenny-O: Sadly, there's much more of it than I have shown. And the thing that gets me is it all tends to linger. I've picked up trash around the neighborhood and put it into our bins just so it will finally get collected. I specifically remember doing this with a pair of hubcaps that sat beneath a tree up the street for several weeks.