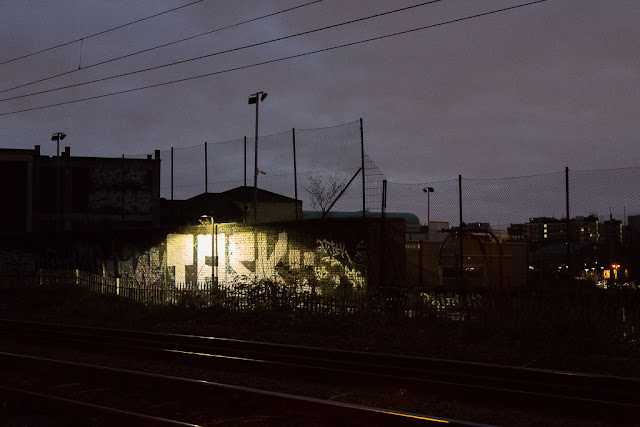 Dave and I had a surreal experience yesterday.

It began at work, where I was talking to some co-workers during our morning "visioning" exercise regarding the school's mission. One told me in passing that a fellow colleague had recently been featured on an episode of the American TV show "House Hunters International." The show follows the efforts of a featured guest to find an apartment in some overseas location -- in this case, obviously, in London.

Now, I knew that this particular co-worker had been living in our previous flat in Notting Hill. So I asked her whether she'd moved. No, it turns out -- the flat featured on the show was our old one. The show simply documented her search before she moved in.

What?! THE FLAT WHERE WE'D LIVED FOR THREE YEARS WAS ON A TV SHOW?

Needless to say, when we got home last night, Dave and I tracked down the episode right away. And here it is! Our flat is the no. 2 option on the show -- the one eventually chosen by my co-worker and her partner, with the help of a real estate agent and his over-anesthetized puppy.

It was so bizarre to see our previous bathroom, our wardrobes, our spacious kitchen, the view from our balcony, the fireplace that Olga loved so much -- all on TV. It's weird that the flat was mostly unfurnished, because when we rented it it had furniture, and it was all still there when we moved out in 2014. Maybe the interim renter or the owners disposed of it for some reason.

At any rate, if you feel like watching a fun and entertaining show about London real estate, as well as having a look at our former abode, click the link above. I'm just one step removed from reality TV! (And maybe a few steps closer to Kevin Bacon?)

(Photo: Graffiti on the train tracks in West Hampstead, shot during an early morning walk with Olga.)
Posted by Steve Reed at 5:43 AM

What a coincidence about your old flat. Today's photo is the best for the year.
Alphie

That really is bizarre! I watched the whole show. Melanie seems like a delightful human being but Chris keeps her grounded.

I watched the entire episode, too. Chris got on my last nerve, but Melanie was so positive about everything. Your 'flat' was the one I would have chosen, too.

how crazy is that! you're almost famous.

That would be interesting to watch!

I'm going to watch it!
How very, very bizarre!

That was awesome! I just watched it and I must say I love your old place. I can see why they chose it. It had a great kitchen and a wonderful view. My good friends Julie and Dave owned a flat in Buenos Aires and I stayed with them there about 10 years ago. They sold it about a year later and one evening when I was watching House Hunters International that very same flat was featured on the show. So now I know two people that that has happened to.

Very cool! I'll check it out when I get home from work tonight.

Oh, that was so cool, and what a nice coincidence that your old place was on the program! I enjoy things like that!

That was a neat program and how cool that it was your previous flat. A great location!

I deleted my previous comment because it kept nagging at me :)

Thanks for the comments, everybody!

Alphie: Even better than the Olga photos from New Year's Day?! I think not. :)

YP: I've never met Chris but I suspect the producers highlighted the differences in their personalities for dramatic effect.

Catrina: She seems very positive at work, too!

Ms Moon: Let me know what you think!

Sharon: We LOVED the kitchen in that flat. We miss it now, because our current kitchen is smaller and less modern. Also, yes, the view was nice. But nothing tops having a garden, which we didn't have in the old place. How bizarre that you've been connected to TWO flats on that show!

Jenny-O: I had the same thought as you, but as I mentioned above, I suspect the show was selectively edited (as most reality shows are) to highlight differences and conflict. I wouldn't assume it's an accurate portrayal of either personality.

I just watched the show. I like Chris! Ha!

OMG I love House Hunters International! I actually tape episodes for late night mindless watching, as I love to see how people live in other parts of the world. I think I might have the episode with your flat taped on my TV at this very moment. I will definitely have to watch it! Why is this so exciting to me! LOL.