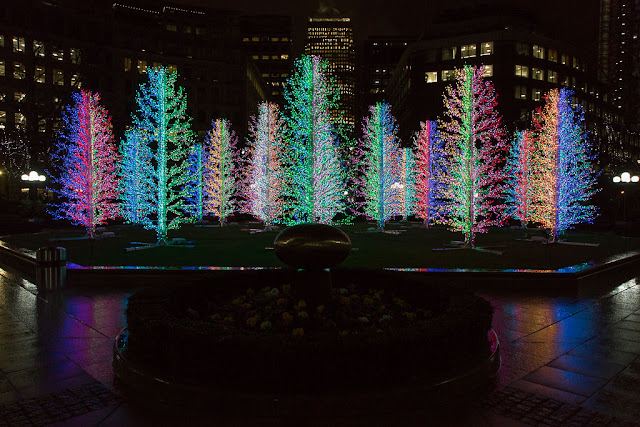 I went to see the Winter Lights festival at Canary Wharf last night. I've done this a few times in Januaries past, and the weather is always miserable -- rain or wind or freezing cold or all three. True to form, last night it started snowing as I walked around! But it's still worth it to see the illuminated artworks.

Above is "Sasha Trees" by Adam Decolight, which looks very static in the picture but actually shimmers and changes color. Here's a video. 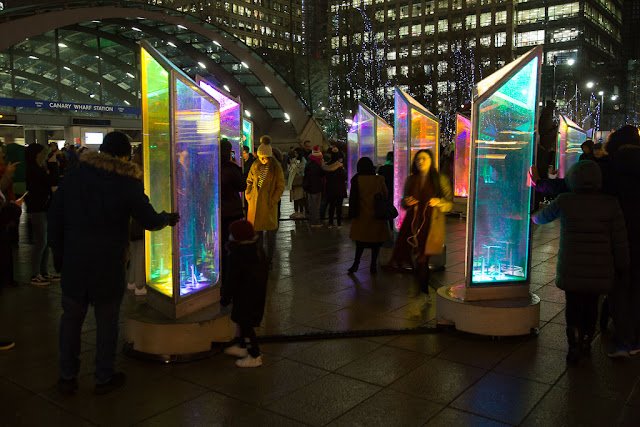 These irridescent pylons, called "Prismatica" by Raw Design, also involve movement -- they can be spun around, and there are chimes inside to provide an aural component. 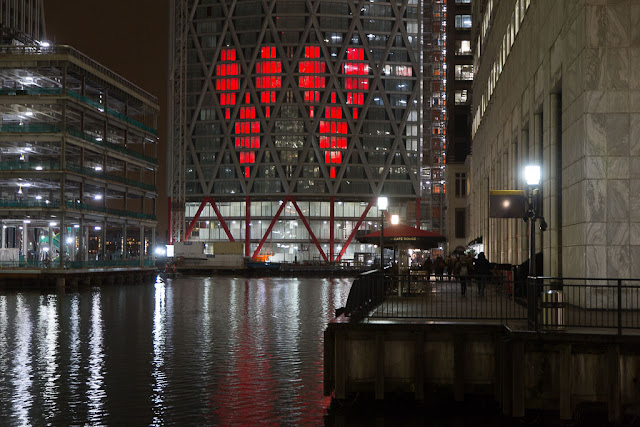 "Two Hearts" by Stuart Langley uses the surrounding architecture and water as a canvas. 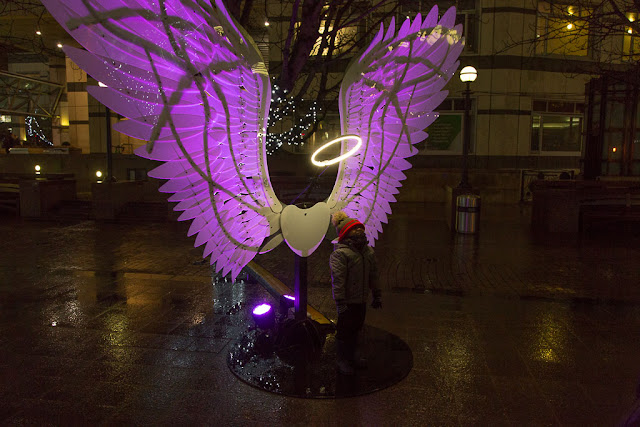 This is one of the Oge Collective's "Angels of Freedom." I cracked up at this little kid, who not only didn't reach the halo -- he kept pulling his hat over his face to hide from his mother's camera. Clearly not an angel. Or at least a mischievous one. 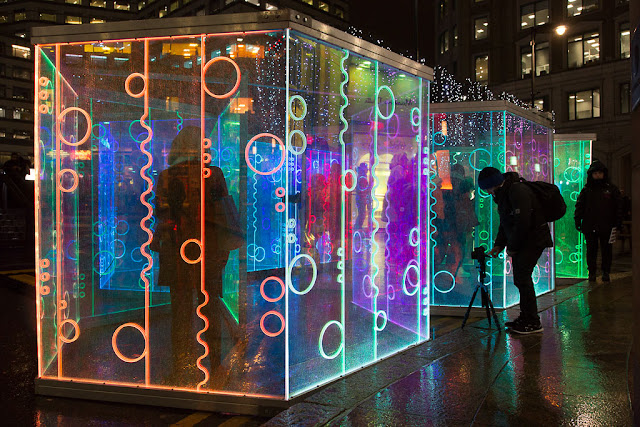 Another photographer was working the scene at the Heofon Light Maze, by Ben Busche of Brut Deluxe. I didn't go in the maze, but as you can see, plenty of people did. It kept changing colors, too. Here's another work that was impossible to capture in a still photo. It's called "Colour Moves," by Rombout Frieling Lab, and involves rapidly shifting colored light that makes the patterns on the walls appear to move. I took several pictures, and they're all entirely different colors. Here's a video. 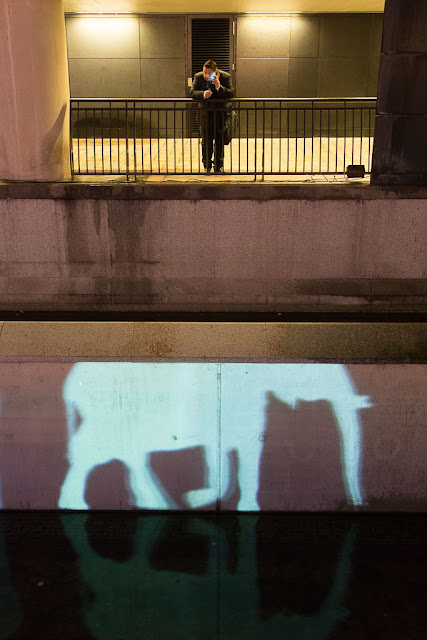 This is the most poignant of all the works I saw -- "The Last Parade" by Alexander Reichstein. It's a site-specific video installation that projects silhouettes of endangered and threatened animals on a wall along a canal. The animals slowly fade out as they walk from left to right, an obvious metaphor for what's happening in nature. Here's a video.

(I found it oddly appropriate that this guy was just hanging out, smoking and talking on his phone, apparently oblivious to the art.) 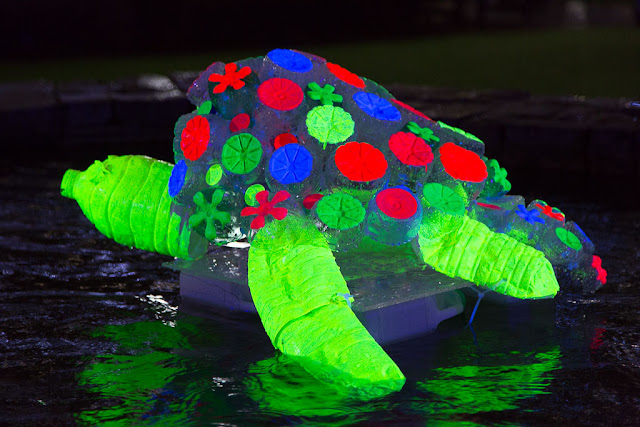 Finally, also with an ecological message, here's one of Mürüde Mehmet's "Floating Islands," made of plastic debris in the form of plants and animals, and then brightly painted and lit with black lighting.

It's not always easy to get myself all the way to Canary Wharf after a long workday, but I'm always glad when I don't miss this annual exhibit!
Posted by Steve Reed at 7:53 AM

Thanks for sharing your pictures Steve. I will tell my daughter about the event.

That video of the march of the magnificent and endangered-soon-to-be-extinct life forms was SO SAD. It was amazing that the silhouettes were so lifelike, and easily identifiable, and SO SAD. I know I'm getting more sentimental the older I get, but the whale at the end killed me. This is why I think it is immoral to have more than 2 kids per couple, but preferably zero, none. Childlessness is the best way to be because the world doesn't need any more people and chances are that your sorry DNA is not worth perpetuating at the expense of a cheat or even a gila monster. Let's get some humility.

I love this light extravaganza! Wish I could go. I'm with Vivian - the idea of the extinction of animals is SO SAD. Glad I did my part by not having children, but I'm sure I could do a LOT more!

What a strange species we humans are. We can create things of such great beauty and technicality like these and yet, we cannot figure out how not to slaughter our planet and the creatures we live with.

I'm so glad you do get down there every year. these works are always so wonderful. and like the other commenters, the parade of endangered animals is so sad.

What a stunning light show. I'm so glad you went and photographed this. It's quite beautiful.

PS-- I just watched the videos and they are really fantastic.

they are doing amazing things with light these days. I'm going to have to get downtown some evening and take them in.

Thanks so much for sharing these photos!! I've seen one or two on Instagram but these are far superior and they show that there was a lot more to see than that angel. It was worth braving the cold and inclement weather and I appreciate that you made the trek. I loved all the videos too. The Last Parade was very (as you say) poignant. I especially liked the whale.

The Last Parade was mesmerizing.

Someone had a radical idea to get people out on a cold night! Thanks for reporting back.

These are so cool. I bet they look great in the falling snow! The tunnel of green light reminds me of the Detroit airport.

Vivian: Isn't it SO SAD?! I completely agree. And I'm on board with you about childlessness, too. I once read that although we all obsess about our carbon footprints and buying local and whatnot, the best thing we can do for the planet is not have a child. I think if you really WANT children having a reasonable number is fine.

Bug: Actually, that IS a lot. Not having a child takes a lot of stress off the planet.

Ms Moon: We're just programmed for survival, like every species, and although we pretend we're rational at the end of the day we're animals too! Nature has never before needed a self-limiting species; normally we all try to have as many babies as we can in the hopes that some will grow to adulthood. Modern medicine has changed all that!

Ellen: They are wonderful, aren't they? And I bet it gives a boost to Canary Wharf at a time of year when people aren't likely to visit. (Except the ones working there.)

Robin: It's amazing what these artists come up with. Glad the videos worked for you. So many of the pieces feature movement and changing light and even sound that pictures just don't do them justice.

Red: Absolutely! Does your town have sculptures that involve light?

Sharon: It's funny how the angel seems to be the most popular. I guess it plays along with our selfie culture! (There are actually several angels, scattered around the area.)

Jenny-O: Yeah, it's a good way to get people out and about!

Kerry: Ha! It does look kind of airport-ish. I was reminded of the entrance to "Space Mountain" at Disney World! Unfortunately the snow wasn't nice snow -- it was wet, clumpy snow. :/

Hi Steve, I am a first-time visitor to your blog having dropped in from Hiawatha House. In this New year, I have been looking for "new to me" blogs to read as there are so many diverse and interesting bloggers on line. I've been reading through some of your past posts, but haven't commented on all (it's a time issue). That said, I wanted to let you know how much I enjoyed this light show. There was a similar maze tunnel in an art exhibit I attended in Washington, DC and it was quite amazing as well.

Beatrice: Thanks so much for stopping by! Glad you liked the lights. I hope to continue hearing from you!

Gosh, the lights are magical.

I loved this year's Winter Lights. I've gone the past four years now and this year's was one of the best (if not the best). http://jenikya.com/blog/2019/01/canary-wharf-winter-lights-201.html