Afflicted, and a Ditzy Moment 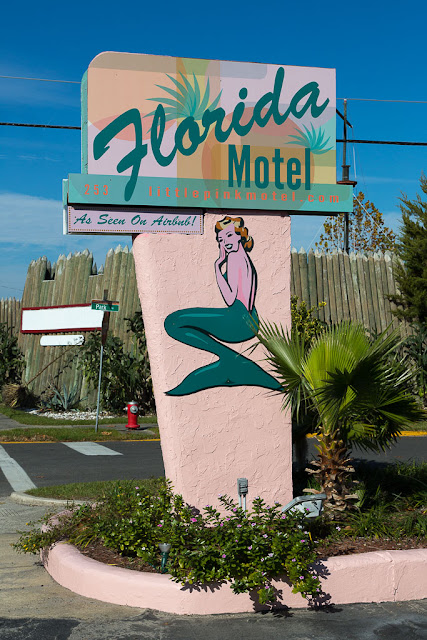 I've come down with a cold. Argh! I'd blame the airplane, but I think it was already hitting before I left Florida. I was sneezing and my nose was bothering me even then. Now it's a full-on, eye-watering, nose-running extravaganza. Fun!

And of course today is my first day back at work, and I can't miss it because -- among other things -- we're meeting to discuss the school mission. (You'll remember that I'm on the committee to possibly rewrite our mission statement.) So I'll be chugging the Lemsip and toting Kleenexes in my pocket, and doing my best not to touch anyone, and hopefully that will get us all through with a minimum of hazard. (The students aren't back until Monday.)

I've been thinking of a few odds and ends about our Florida trip that I never blogged. Since I have nothing much else to report today, let me take note of those:

-- I spotted the sign above outside a motel in St. Augustine. I love its retro feel, but clearly it's pretty modern, since it references both the Internet and Airbnb! That's one tech-savvy mermaid.

-- On the plane from England, I was amused to see a woman wearing a plain gray sweatshirt bearing the words, "My dog thinks I'm cool."

-- Speaking of sweatshirts, I have one from a British tree-trimming company called Tree Wise Men. (It was abandoned on a fence years ago at the housing estate where we used to live. After I left it there for about a week and no one came back to claim it, I washed it and kept it myself.) Anyway, I was wearing the shirt in Ocala when we stopped for lunch at a Burger King. A man sitting behind me said, "I like the name of your company. Clever!" And instinctively, I said, "Thanks!" -- even though of course I had nothing to do with naming the company. 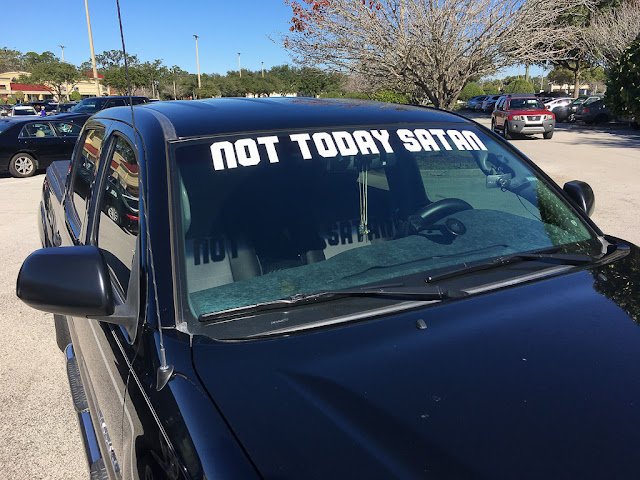 -- Dave and I saw this car in a parking lot in Jacksonville. Have you ever heard the B-52's song "Devil in My Car"? 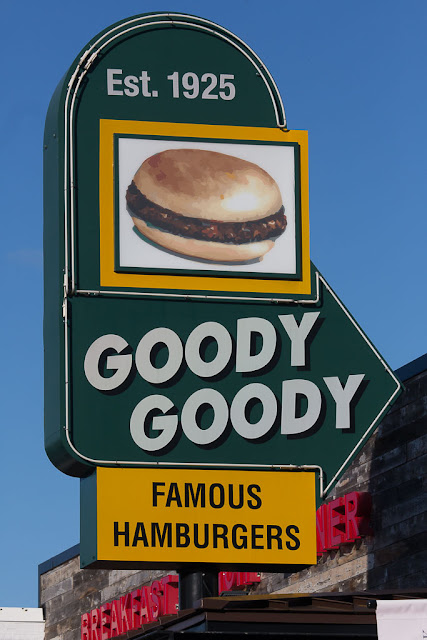 -- Here's another rehabilitated old sign. This one stood outside a legendary downtown Tampa burger joint that closed years ago. A well-known restaurateur bought the sign and the name and resurrected the business in a fashionable neighborhood. We ate there one morning and loved it.

-- I've talked a lot about Dave forgetting his computer, but I haven't mentioned my own brainless mistake. We popped into a Winn-Dixie in Bradenton to buy Dave's mom some flowers. When we took them to a cashier, he rang them up and I chose to get $20 in additional cash from my debit card. That brought my total to $36. "Those flowers are $16?!" I said to Dave, incredulous. I was so shocked that I walked out of the store without my $20, and didn't realize it until several hours later. By then it was too late to do anything. Argh!
Posted by Steve Reed at 6:10 AM

I love the signs and cracked up at your story of leaving without your $20. I'd totally do that and feel like I'm doing things more and more like it as I get older. Isn't it funny how we're all getting older, even in blogland? And the giant Satan warning on the car is just -- well -- classic for the south!

I am thinking of having our horse chestnut tree cut down. Any chance of an estimate?

The cold is doing the rounds everywhere, even my son in Scotland who thought that taking vit D and washing his hands frequently would keep him clear managed to get it, lol
Get well soon, ours lasted about a week.
Briony
x

Not Today Satan...I want that on a T-shirt.

Colds are the worst. You know what they say: Feed a fever, Binge Watch The Bodyguard a cold.

Feel better Steve. I'm getting on a plane to Florida myself today, and hope I will emerge unscathed. Last time I flew I came down with the worst flu I had had in decades.

Get better soon! some people are great at catching the details in a sign. I like tree wisemen.

So those flowers really cost #36.00. I know how you feel, I've done that too. Sorry to hear about the cold. Everyone I know has a cold right now so I'm downing vitamin C and zinc like crazy.

Love those old signs, restored or reimagined.
At my thrift store, I am generally the one who looks up vintage items, and I am often pointing out to volunteers who bring me items to price that if there's a URL on it, it's not an original.

Hashing out a mission statement sounds good but dire work--especially with a cold.

There is a wicked cold virus making its way across Florida this holiday season. Just a little gift from the Sunshine State. Sorry to hear you got it.

I too like the restored signs and you thought $16 was a shocking price for the flowers.

I would definitely eat at "Goody Goody Famous Hamburgers"!

Hope you feel better soon. It's definitely the season for viruses. Ugh. Love the sweatshirt story and all the photos. Take care there.

You must not buy flowers often to have been shocked at that price. I hope you feel better today. Happy 2019.

Those flowers turned out even more expensive than you thought :D I'm always amazed at how much flowers cost. I priced arrangements in special dishes for my mom at Christmas and they started at $65 for a very small one and the price went up accordingly for larger ones. That seemed excessive to me.

I hope your cold doesn't last long. Colds are a giant nuisance even if they aren't serious.

My S.O.'s 95 year-old-mother lives with us. She cannot walk and we used a lift to move her from the bed to a reclining chair and to the commode. She prefers not to leave her room as she feels safe and comfortable there and really seems very content. For her birthday someone bought her a small vase of pink carnations and she loved them. So much that she wouldn't let me throw them out! She can't see well, and even when they were past their prime, she said they still looked so pretty. I went to buy her more when I was at the grocery store, and it turns out carnations are 2 for $1.00! I'll be keeping her vase filled from now on. What a bargain!

Elizabeth: Yeah, it's a sad fact that we all get a little more absent-minded as the years pass!

Briony: When I went back to work yesterday I found that many of my co-workers have it, too. So at least I'm not going to be responsible for introducing it to the school!

Vivian: That would be an EXCELLENT t-shirt, LOL! Did you watch "The Bodyguard"? I loved it!

37P: Yikes! I hope your flight went OK and you fended off the germs!

Sharon: I know! It's so ironic that I was complaining about the price and then I more than doubled it!

Fresca: Yeah, the presence of anything Internet-related is a dead giveaway, isn't it?

Colette: What shall we call it? The Florida Flu? The Alligator Ague? The Gulf of Mexico Grippe?

Catalyst: It's a great name, isn't it? I wish I'd taken a picture of the old sign in its previous location, just for contrast. I used to drive past it every day on my way to work.

Robin: Thanks! I'm doing my best!

E: I buy them occasionally, but I really think they're cheaper in London. Or maybe it's just the difference in value between the pound and the dollar. (Although they're close to parity now.)

Jenny-O: I guess a lot of work goes into some prepared arrangements, so I could see how they'd be more. But this was just a bunch of flowers in a supermarket. I suppose there was some minimal arranging involved but nothing much!

Sue: A bargain indeed! I never understood why no one likes carnations. I think they're nice-looking flowers. I guess it's just the fact that they're inexpensive that puts some people off.