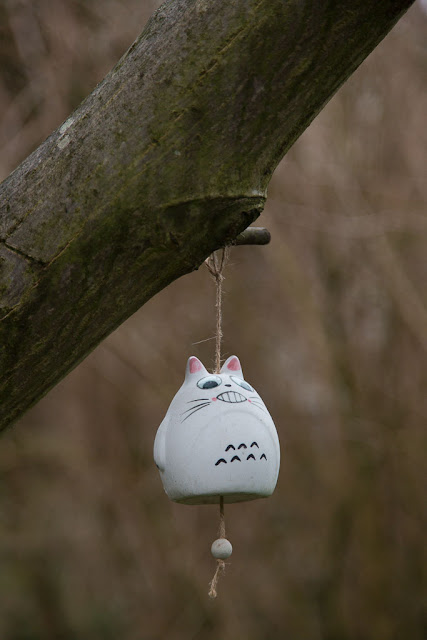 Totoro has been repaired and is back in his usual position on the walnut tree, keeping watch over our little garden.

I'm telling you, I am not a superstitious person, but things go wrong when Totoro is not at his forest-spirit post. On Friday, Dave came home from work to find that a pigeon had been massacred near the back steps. The grass was carpeted with feathers and in the middle of it all lay the poor pigeon's carcass. We decided to leave it there, figuring that something would come along and take it (perhaps the critter that killed it) and indeed that's what happened -- when we woke up yesterday morning, it was gone.

Dave thinks the culprit might have been a cat, but the damage seemed pretty severe. My money is on a fox. Olga was locked indoors at the time, so it couldn't have been her, but she must have had quite a show.

I toyed with what to do about all the feathers on the grass. A rake? I even considered vacuuming them up, but that seemed truly insane. So right now they're all still there.

Anyway, I suppose nature is nature and bad things happen. Bad for the pigeon, that is. Good for whatever ate it. 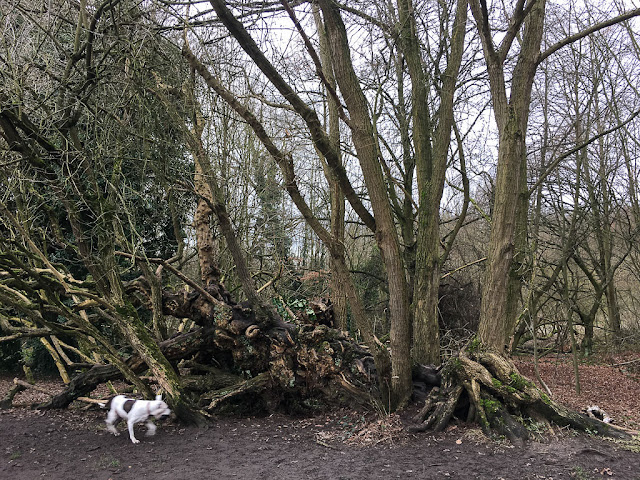 I spent the morning doing every single thing I could think of that I've been meaning to do and hadn't yet done. The list is not exhausted, but I got a lot out of the way. I trimmed the maidenhair fern in the living room and repositioned the climbing rose in the back garden (and lost no blood, amazingly). I did laundry and vacuumed and cleaned the floors and watered all the orchids. (All but one are sending out new blossoms!)

Then I took Olga to the Heath, where some kind of foot race was going on. Every once in a while we'd pass groups of people cheering on runners, yelling "Good man!" or "Go, Nicole!" Olga and I just tried to stay out of the way.

I intentionally did not bring my camera, and it felt so good to be unencumbered. But I couldn't resist an iPhone photo of Olga with that gnarly log.

I also got rid of some dead patio plants and spent-looking houseplants, and we have a few more to discard in next week's yard-waste collection. I always try to keep everything alive through the winter, but the fact is, it's natural for some plants to die. I need to be better about simply letting them go and getting fresh, vigorous ones in the spring.

Last night Dave and I watched "Holy Hell," a Netflix documentary recently mentioned by another blogger. (I can't remember who!) It sounded intriguing -- about a pseudo-Buddhist religious cult incorporating ballet -- and we were not disappointed. Cults are so interesting -- I always come away wondering how people could possibly have fallen for it. But there's something in human nature that makes people want to belong, that craves love, and sometimes it's strong enough to make people set aside common sense.
Posted by Steve Reed at 6:30 AM

My first thought was to suggest burying the feathers but no doubt the ground is rock-hard. So, rake them up & put them in the yard-waste collection.
Alphie

We have a sparrowhawk here which will take the odd pidgeon
Bird feathers are messy..

It must be a good time of year for orchids.......I have got 3 in flower and another 3 about to blossom forth !

I think it was me that mentioned "Holy Hell." At least I know I watched it.
Yeah- how could ANYONE fall for that weirdo? Ugh. But a lot of people have. And suffered tremendously for it.
A cat may well have done that pigeon in. They are vicious hunters.

Punching through a long to do list is so satisfying. You’ve inspired me to take on mine.

My guess would be that a cat caught the pigeon. I think a fox would carry the bird to a place where he wouldn't be bothered while eating his meal.

common opinion is nature is cruel but we all have to eat. is it less cruel for an animal to starve to death than to quickly kill it's dinner? I vote the fox. I don't think a cat would return to a bird it had killed but a varmint would. good job on the to do list. I need to clear my raised beds for the spring.

I'm glad whoever killed the pigeon returned for it. Must have been a hungry critter, so it makes me think it was a fox.

Oh, definitely a fox. A cat would never kill another creature. ;^/

When I lived in the house with the big yard, I used to find bird feathers in the back yard all the time but never the bird carcass. I'm sure it was cat who was stalking the birds but it must have been a tidy cat. It always took it's kill with it. You did have a busy day.

Around here we have hawks which take birds and leave a mess of feathers. They will also take rabbits. I don't let my small dogs out without me staying right with them. I know a hawk could carry off my chihuahuas. Ugh!

LOL at YP - and THAT's an image I didn't really need in my head. Ha! I finally took down the Christmas tree today - feels good to have that chore out of the way.

Totoro is just so darned cute. I'm glad you could repair him!

It's sad about the bird, but as you said, it's good for whatever creature is able to sustain life because of it. Ah, nature. It thrills me and chills me in equal parts.

YP: Mrs. Kravitz and I are definitely not on maidenhair terms.

Alphie: Actually, the ground is super-muddy at the moment, but I think burying them would still be too much work. So far I've just left them there. Yes, the yard waste may well be the way out.

John: And you should know, given the Ukrainian village, right?

Frances: Yeah, why do they bloom in the winter? It's counter-intuitive. Maybe they're getting decreased sustenance from less sunlight so they put out flowers because they think they're going to die.

Ms Moon: I thought it was you! But then I tried to find mention of it on your blog and I couldn't. So I wasn't sure.

Red: Maybe. But I've never seen a cat savage a carcass the way this one was savaged -- usually they kill pretty cleanly, it seems to me. Not that I'm an expert.

Sharon: Well, that's exactly why I think it wasn't a cat. Cats ARE tidier. They don't strew their kill all over the garden.

Sue: Our upstairs neighbors have a pet rabbit that they occasionally let out on their (uncovered) porch. I keep waiting for a hawk to swoop down on it!

Bug: Well, that was definitely a good thing to get done!

Jenny-O: Absolutely. Mother Nature does not mess around.