A Meeting at London Bridge 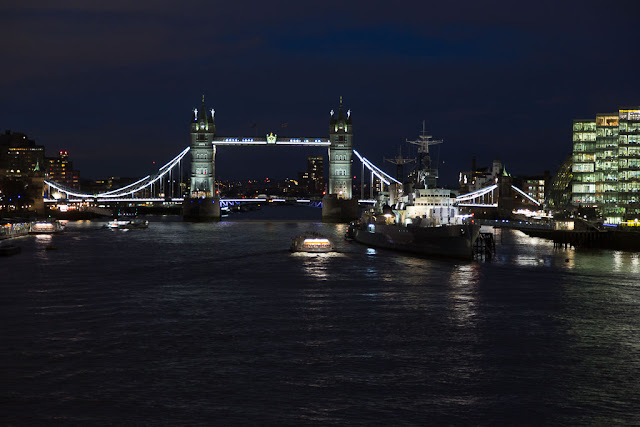 I had a Royal Photographic Society meeting last night near London Bridge. Naturally I brought along the camera and, with a couple of hours to kill between work and the meeting, wandered around taking some night shots of London. (That's Tower Bridge and HMS Belfast in the photo above, which was taken from London Bridge.)

I haven't done anything with the RPS in a while, partly because I fell out of contact with them. I maintained my membership but last spring I stopped getting their e-mail newsletters and other electronic notifications. A few weeks ago I got word of this meeting by snail mail, in a letter that said I'd "opted not to receive e-mails." That was news to me! Turns out I got automatically removed from the e-mail list because of the EU's new data protection laws. Doh!

So I rectified that and hopefully now I'll be more involved and aware. 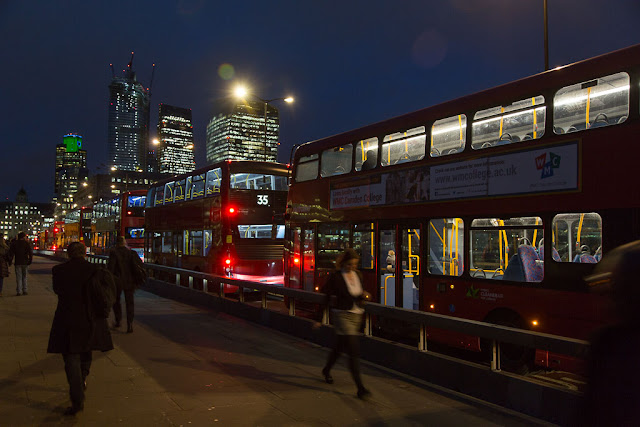 A speaker at last night's meeting talked about his successful street photography and showed us a series of pictures. He was interesting, and his pictures were great, but man, did he go on. He must have shown us 100 images, or it felt like that, anyway. Someone needed an editor. I don't want to look at that many pictures from even the best photographer in the world, especially on a work night when I'm tired and I've had wine and the time is approaching 10 p.m.

Dave called in sick to work today. He's feeling really fatigued again. I think he needs to go back to the doctor and have another chat about managing his Crohn's.

Meanwhile, the British government is in rebellion over Brexit and no one knows what's going to happen there. I feel sorry for Theresa May, who has tried valiantly to negotiate a way through the hellish terrain on this completely unnecessary trek. She gets points for persistence and determination, and I don't see anyone else in government -- certainly not the weasel-like Jeremy Corbyn -- who I would prefer as prime minister. Apparently most Leavers just don't believe the country will come to harm if we drop out of the EU with no deal at all. It's sort of like Trump's supporters who blindly support him despite all evidence of his buffoonery. We are in a place where reason and evidence mean nothing, and I fear we're driving over a cliff.
Posted by Steve Reed at 7:28 AM

My husband and I are also watching the ongoing Brexit soap opera here in Australia. Much more interesting than Days of Our Lives or As The World Turns. But horrible in its implications. An article I read yesterday said that the difficult relationship Britain has with Europe (not just with the EU) goes back 200, or even 500 years. History is the key to the present. And in some ways, the Brits never really reconciled themselves to the loss of empire after WW2, hence the current expectations by the Leavers that they can somehow return to the past (whatever THAT was!) As a neutral observer from the other side of the world, you have my sympathies. But that is about all I can offer you at the moment. Unless you want to come out here to live/work!

In my humble opinion, your description of Jeremy Corbyn as "Weasel-like" is unmerited. Mr Corbyn is a man of principle with impeccable parliamentary credentials. Naturally, because he has always been a leftist, the Conservative-leaning British press have persistently treated him with disdain as they seek to steal his thunder. In fact, he has had so much mud thrown at him that he may be unelectable which is a terrible shame in my view. He is a thoroughly decent man and in that sense far different from his pompous Tory opponents.So I will keep singing, "OH! JEREMY CORBYN!...OH! JEREMY CORBYN!"

David: Don't tempt us unless you mean it! LOL

YP: It's not Corbyn's politics I object to. I think he's just a terrible leader. He never convincingly advocated for Remain (being a Leaver himself) and thus failed to help prevent the working people of Britain from harming themselves by supporting this misguided movement. He has failed to advance any workable plan for making Brexit functional. He is not the voice Labor needs and he is not the voice the country needs.

I think I'll be with John Gray and wish Dave the best.
And also say that those photos are gorgeous!

There's something about photos of people walking, in mid-stride, that makes me want to look, and look again.
Eventually I might even notice the full moon above them!

and Putin couldn't be happier. he is loving the turmoil in the UK and the US. destroy us from within indeed. I know what you mean about the too long program. we get some of those at the garden club.

The photos are so beautiful. A nice balance to the insanity of the times we are living in. Send my good wishes to Dave, hope he finds an answer to help with the Crohn's.

Wonderful night photos. I hope Dave feels better soon. As for Brexit, i just keep asking myself why.

These photos today are wonderful. They are so crisp and clear. I think Ellen is right, Putin was passing the vodka last night.

Well we may not be going over a cliff but we're certainly on a slippery slope. We make it bad for ourselves by voting for these buffoons.

I must agree with YP in his defense of Jeremy Corbyn. He is not a weasel. I think of him as more of a badger. Or a stoat. I agree with the others about your photos today: fantastic! Best wishes for a speedy recovery to Dave.

Love the photos. I agree with Fresca above, I just love everyday type photos of people in mid-stride. It really makes you feel like you're getting an insider's view of the world for some reason. I think Americans and Brits can really sympathize with each other at this point in time. We're feeling a lot of the same emotions.

I hope Dave feels better soon. Having a chronic illness is hard. Our daughter does, and it really affects every part of her life.