A Weekend in Pictures 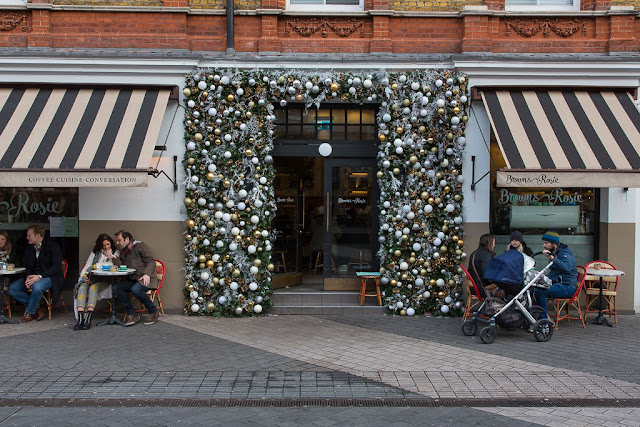 Well, here we are, in January -- another month of thin blueish daylight and chilly (although thankfully so far not frigid) temperatures. I went to Kensington yesterday, to the V&A, and found that some shops and cafes still had their holiday decorations up. (At least, I assume that doorway is a holiday decoration. Surely it's not like that all the time?) 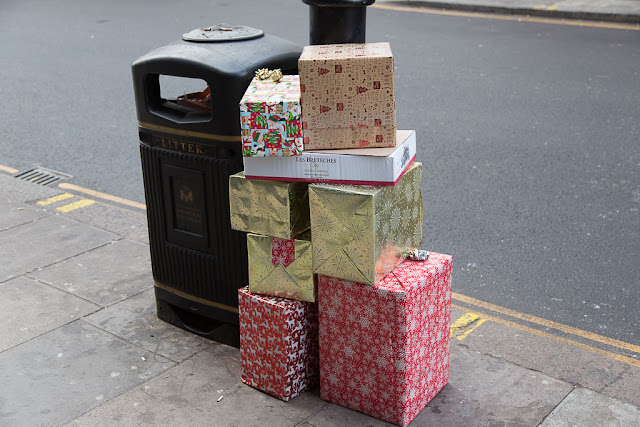 I passed this intriguing stack of wrapped boxes next to a trash can. I'm sure they're empty, used for some type of store display, but I couldn't help having an urge to unwrap them! (I bet someone did.)

But I'm getting ahead of myself, because that was yesterday. On Saturday I stayed home and read, for the most part. I churned through a stack of magazines that accumulated during our absence in Florida, and I took Olga to Fortune Green and the cemetery. 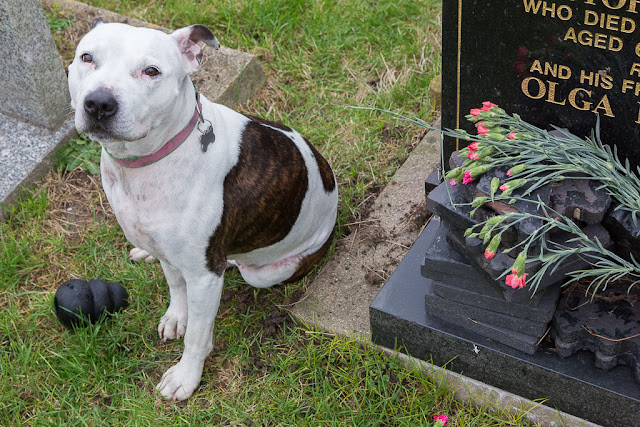 She found her namesake!

On Saturday evening, Dave and I watched Netflix's new movie phenomenon, "Black Mirror: Bandersnatch." It's a sort of choose-your-own-ending adventure in which the viewer is presented with options at several points, and can select one or the other. I told Dave before we watched it that I was a bit nervous because I was sure I'd have to see all the possible outcomes, and indeed that's what happened. We watched it once, making our choices, and then we flipped through it again to see what would happen had we gone another route. We basically watched it at least twice, and we still didn't get to all of the endings, according to what's been reported.

Fun fact: Part of the movie was filmed at Trellick Tower, a building that has long interested me and that I once visited. 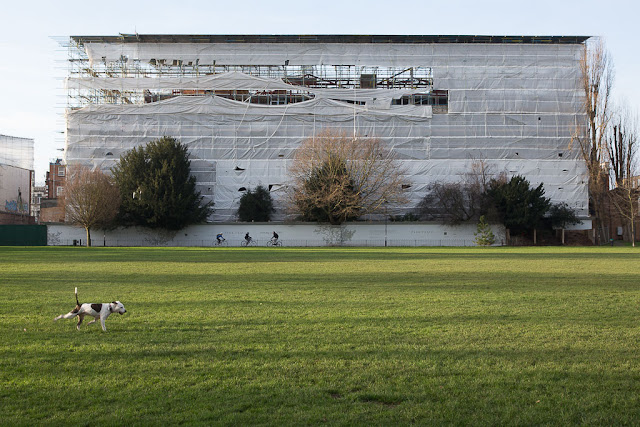 On Sunday morning, Olga and I walked through Kilburn. The gigantic scaffold covering some new housing over Kilburn Grange Park is looking a little windblown these days.

After our walk, I cleaned the house and even vacuumed under the bed, which was an involved process. I basically had to take it apart -- upend the mattress and the frame, both of which are heavy, and run the vacuum on the floor beneath before reassembling and remaking it. Now I don't have to think about it for another six months or so. 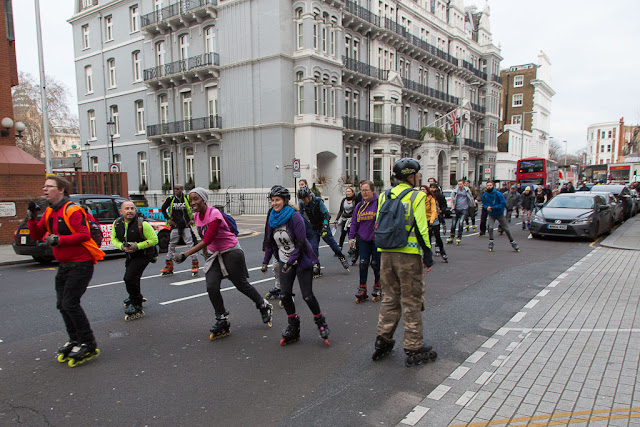 Afterwards I went for my Kensington walk. I saw this mob of rollerbladers -- at least 50 of them, I'm guessing -- rolling down Harrington Road while blaring Kim Wilde's song "Kids in America." Kind of surreal. Not something you expect to see in January!

At the V&A I explored the new photography galleries and some other areas too. It's a fun museum for getting lost -- and it's so vast it's almost impossible not to. As it got dark I took the bus back home, where I ended the day with a martini as Dave and I watched (and mocked) the Episode 2 film of "Star Wars." I'm not sure I ever saw that movie before. I'm also not sure I care.
Posted by Steve Reed at 7:21 AM

The beauty of living in London is that there is always something interesting going on.
I wonder if there was in fact anything in those parcels, I think I would have been tempted to shake one, lol
Briony
x

Awwwww, sweet Olga looks so smoochable. She has no idea what the joke is, but you can see that she's such a good dog that if you say, "Stay", she'll stay; if you say, "Smile", she smiles. What a sweet face.

I have not heard that song, now I'll look for it. What fun it must have been for all those rollerbladers to take over the road. And I agree that Olga looks great.

our bed iws high up off the ground so it's easy to vacuum under it as long as there is nothing stored under there which when we lived in the city house there was. just a bunch of dust collectors. when we moved the new rule was nothing under the bed.

East California. That's a good one.

This song was written by Brits and it shows...why would two Brits write a song called Kids in America anyway? Why couldn't they stick with what they know and write Kids in Croydon?

Sometimes I try to use a dust mop and broom to clean under the beds.
Sometimes.
When we got in to Tallahassee after midnight on Thursday the Muzak was still playing Christmas songs. ENOUGH ALREADY!
CHRISTMAS IS OVER, PEOPLE!
Olga is a darling. I want to rub her head and scratch her ears and talk baby talk to her.

Sounds like you had a fun weekend. Well, except for the house cleaning part. Olga looks so cute in this photo. Those boxes do look very tempting.

I think it would make me crazy to not know all the possible outcomes in that movie. I'd probably get obsessed & try all the choices. It would take month & then I would just be mad that I'd wasted all that time. Ha!

Steve, you can come and clean my house ANY-time!

That's an interesting concept for a movie. I remember when the "choose your own adventure" books came out for kids. Same concept, totally different level of sophistication :)

Love those shots of Olga. They are so different but both so pleasing to the eye.

Briony: Perhaps I should have! As I said, I'm sure SOMEONE did.

YP: I used to rollerblade pretty seriously back in the '90s! (East California?! What the heck does that mean?)

Vivian: Olga really is the best dog when it comes to tolerating my photographic demands. She doesn't look too happy about it, but she does it. You're totally write about the song and the songwriters -- isn't the bedrock advice for any writer to "write what you know"?

Colette: I bet you've heard it. You've just forgotten it.

Ellen: We only store shoes under the bed, and not many of those.

Ms Moon: Unfortunately the floor under our bed is carpeted. So it's a vacuum or nothing. And we only have an upright. Argh!

Bug: Exactly! That was my fear. As I said, we still didn't get to all the endings, but I think I can let it go now.

Catalyst: Ha! Fly me to Arizona and I'll consider it! LOL

Vivian: OK! I love a good recommendation! I don't know that one.

Jenny-O: Yeah, those books were huge in their day. We still have a few of them in our library, but they seldom get checked out now. I guess they were something of a fad.

Ahhh, Black Mirror. Every episode I have watched has left me utterly unsettled, and so I think i might pass on having to watch multiple times, because like you, I'd want to see how every path to the end unfolded. It's a fascinating concept, though--much like parallel universes in which every choice option at every crossroads is being played out. Just thinking about it as a concept explodes my mind.