A Frosty Foxglove and 'Swan Lake' 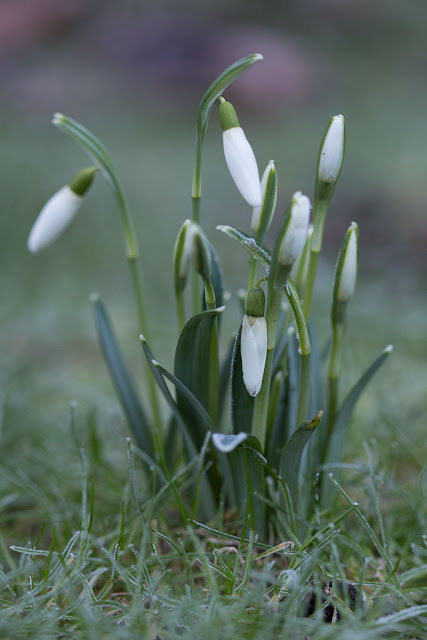 Well, the tree trimmers came and went yesterday, and we had no disasters. I persuaded them to save a big climbing rose that had clambered its way into a tree that we had trimmed. Right now it looks pretty gangly, drooping by itself over our wildflower garden, but my plan is to pull it higher into the tree or maybe onto the nearby fence. It's a very "sticky" rose, with lethal thorns -- they've torn several of my shirts and my jacket -- so that should be a fun exercise. But when it blooms in the summer it's beautiful, and the bees love it.

Above is our little snowdrop, growing in the lawn as it does every year. I put a tomato cage over it while the workers were here and asked them not to trample it. I'm sure they thought I was crazy, but it's kind of out in the open and it seems so vulnerable. 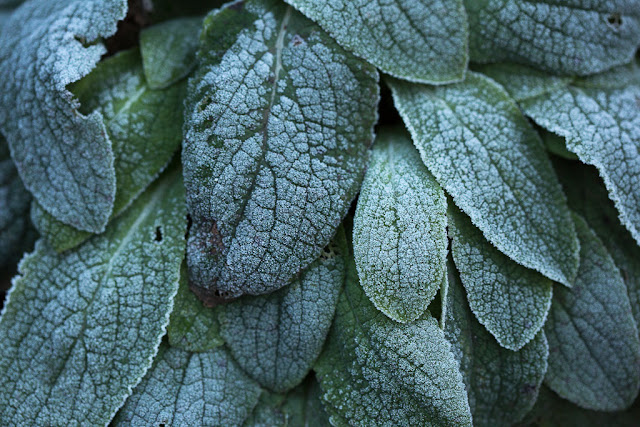 As you can see, we had some frost yesterday morning. This is one of our foxgloves.

Also, the apple tree (bush) was removed as planned. I have to admit the garden does look better without it. We might put something low-growing there but it's nice to have that space open, allowing more light to reach the roses.

Last night Dave and I went with our friends Sally and Liz to see Matthew Bourne's version of "Swan Lake" at Sadler's Wells. It's a sort of gay fantasia built on Tchaikovsky's masterpiece. I first saw it on Broadway in December 1998, and in my journal I wrote that it was "an amazing show, beautiful and aggressive and even sexy. I could have watched the lead swan for hours, to the exclusion of everyone else. He was brilliant, and he truly became birdlike and soared, angry and male and stunningly sculpted."

This production seemed less polished, which makes sense for a smaller theater, I suppose, or maybe I'm just super-critical. But it was no less absorbing and thrilling and beautiful to watch, and the lead swan was no less sculpted. This time it was the prince whose stage presence most drew me in, and I finally got to see the whole show -- when I saw it in New York, some latecomers to the theater disrupted the seating in our section, causing the ushers to make several people move and me to miss a chunk at the beginning. I was so mad I wrote a letter of protest to the theater, arguing that they shouldn't have let the late people in. (It probably got thrown in the trash -- in any case, it was never acknowledged!)
Posted by Steve Reed at 6:57 AM

We don't require tomato cages in The North as our tomatoes are passive and easily controlled.

I also saw that Swan Lake in New York in 1998! I wasn't late (so that wasn't me creating the kerfuffle) and I thought the male swans were gorgeous but the Prince was somewhat wimpy -- I'd love to see him be more commanding. Some of that 1998 choreography bordered on mime, but I bought the VHS tape of the London company anyway and watched it over and over. P.S. I was also very depressed for about a year back then. 1999 was not a good year for me, but Swan Lake was a bright spot.

The lead dancer in the London version of Swan Lake was in the film Billy Elliot -- he was the grown up Billy at the very end of the movie who became a ballet star. Adam Cooper. What a body.

Your words about the ballet reminded me of a documentary I watched on Netflix the other day (I've been watching a LOT of Netflix) called "Holy Hell". It's about a cult that was started by this guy who had been a ballet dancer and part of being in the cult was doing ballet every day. And building a theater for ballet performances.
Yeah, not your typical cult.
And all of the men involved had gorgeous, gorgeous bodies. So did the women but that was hardly the point in this situation.
It was...interesting.
I'm so glad you got your garden sorted out. Sometimes it really helps to have professionals come in and do in a day what it would take us weeks or even months.

I have two old (I didn't plant them, came with the house) climbing roses that have gone way up in the oak and crepe myrtle with vines hanging down. like yours, pretty scraggly until they bloom spring and fall when roses are all up in the tops of the trees.

Now is a good time to be doing the gardening jobs you need done.

You two will have a great time planning out the spring plantings and making the garden look fantastic. I will be looking forward to all the photos.

What? Even in our one-horse town, theatre performances are closed to latecomers until the first intermission! I can't imagine why this wouldn't be done in a large and more "civilized" place like New York! lol

Theatre goers can be so rude. Sorry you had such a bad time. And on Broadway, fer cryin' out loud.

YP: Your tomatoes are FROZEN, YP.

Vivian: Yes, I vividly remember him at the end of Billy Elliott. Apparently he danced that part in New York too -- I wonder if he was the swan that I saw? I think the Prince is supposed to be the soft and sensitive type!

Ms Moon: OK, I have to find that documentary! We usually have people come in to do trimming because we don't have any of the tools, and it seems silly to buy them when we're renting and may not need them in our next house/flat. Plus it's a lot easier. Ha!

Ellen: It's amazing how roses transform from season to season.

Red: This is definitely the time!

Sharon: I'll be sharing them all, I'm sure!

Jenny-O: I KNOW! That was my argument! But when I protested to the ushers, their response was that the late people "paid for their seats too." I couldn't believe it. Hence my ineffective letter.

Catalyst: At this show I had a bunch of kids sitting behind me unwrapping candies the whole night. It's always something!