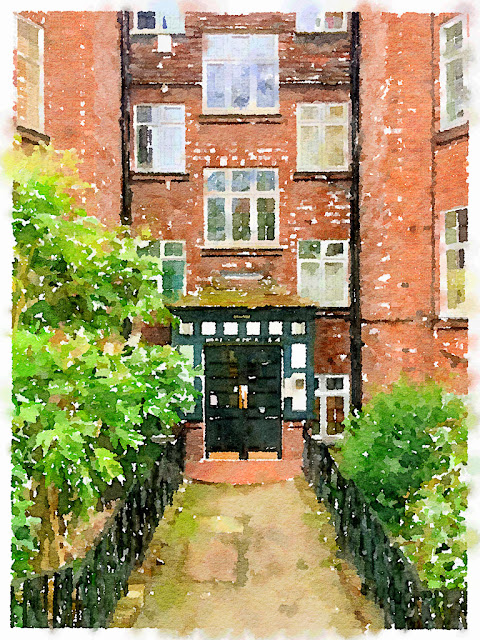 While walking Olga over the weekend I snapped a picture of the entrance to a block of flats on Finchley Road. I envisioned giving the photo the Waterlogue treatment, and indeed it makes a nice watercolor. Here's the original: 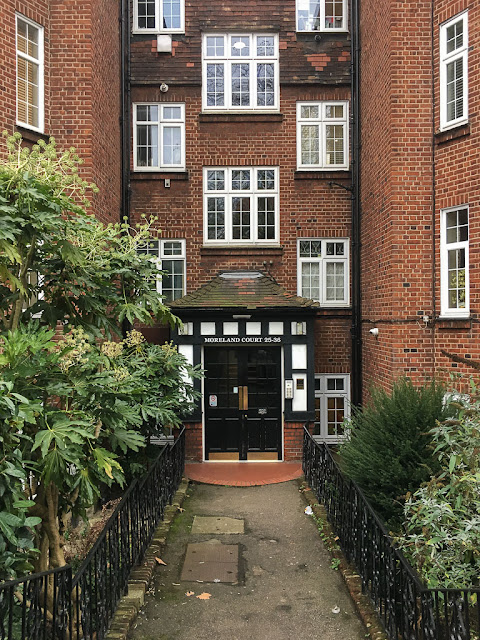 My neighbor with the bright light hasn't had it on the past few mornings -- or evenings either. Maybe someone else protested. (Or do they read my blog? Surely not.)

I got word that my high school graduating class is holding its 35th reunion this year. I probably won't go -- it's at the end of April, which isn't a great time for travel, given that we're still in school. I went to my 20th and I had a blast, but that was in the days just before Facebook. I don't feel the same need to see everyone again now that I'm in touch with them through social media, you know? I might go to my 50th, assuming I live that long.

Yesterday I finished going through all the library patrons in our computer system and removing those who no longer attend the school. If this seems like an endless task to those of you who read about it here before, imagine how it feels to me! But I took a long break between the first and last halves of the list. Overall I probably took 100 people out of the system -- some of whom had been invited to attend the school but never actually came. Why they got imported as library patrons I have no idea.

Dave and I watched most of "Bird Box" on Netflix last night. I had to see what was motivating all these crazy YouTubers to try to drive blindfolded and whatnot. It's an entertaining movie, I suppose, but far-fetched. We still have to finish it, so don't give away the ending!
Posted by Steve Reed at 7:22 AM

I have read this post but cannot think of a witty or salient response. That is not to say that it wasn't an agreeable blogpost.

I like that building! The placement of the windows is symmetrical in a jazzy, be-bop way. I can see why you were attracted to it.

I've never been to a high school reunion. but that's because I went to a different school every year so I'm sure that no one would remember me, and likewise I'd have a hard time remembering anybody except the boy I had a crush on all through 10th grade...and I'm dead certain that I don't want to see him now, 49 years later. I'd like to remember him as a c1970 George Harrison look-alike.

That watercolor is so cool! I might have to try that myself sometime...

My 35th reunion was in 2017, and we had just moved back to NC that year, but I had had my hip surgery the month before & since it was being held in someone's field I decided not to attend. I'm FB friends with many of those folks & we are pretty divergent politically, so it was probably for the best. Ha!

That watercolor version is wonderful! I might have to look into getting that app. It does a much superior job of creating watercolor images than the app I have. I haven't watch the Bird Box show. It looked like it might be on the scary side. I find that I can't tolerate scary movies very well in my later years. I wonder why that is.

I read a review that speculated that while Bird Box is a somewhat mediocre film, our current dystopian reality has made it more appealing. I'm trying to decide whether to watch it. Do you recommend it? And that watercolor is frameable. If you were in NYC you could have a whole side venture framing and selling such images are one of our ubiquitous weekend street fairs. Remember those stalls?

I went to my 20th high school reunion specifically to see two people neither of which came. I haven't been to one since. and the few people I see on FB have convinced me that I don't want to go to another. raving right wingers all, well except for one woman.

I haven't been to any of my high school reunions, but had a friend who's been and posted photos on Facebook. When I graduated from high school in 1970 in New Jersey, my family moved to California. I haven't been back east in a very long time. Next year 2020, it will be the 50th reunion. I hope someone goes and posts photos. Love that watercolor!

I struggle sometimes to find a decent film on Netflix, all those films, I must be fussy. lol
Briony
x

My 60th high school reunion was last year and, as usual, I didn't attend. The last one I've been to was my 10th. They're in North Dakota and I can't think of any other reason to go there so . . .

I love the watercolor version of your photo but looking at the original I began to wonder if that was a big marijuana plant! The leaves look vaguely familiar. Hmmmm.

Wow, I love the watercolor...not a big fan of class reunions since I did not enjoy high school much. I'd rather spend money and time elsewhere. How is Dave feeling?

I love that watercolor! What app is it again? And Bird Box looks way too scary to me!

YP: It wasn't all that, I'd agree. As John Denver sang, "Some days are diamonds, some days are stones."

Vivian: It can be disappointing to see people years later, it's true! Of course, they probably say the same about us.

Bug: I'm in the same situation politically -- if I went I could definitely NOT talk politics!

Ms Moon: I think the windows definitely drew me to the building, without my even really thinking about it.

Sharon: It has its scary moments, and it's pretty bloody. But it's also so absurd that it's not TRULY scary.

37P: Ah yes, those street fairs! I wouldn't want to take income away from real artists, who are out there actually PAINTING images and not just running them through an app. I'm not sure I recommend "Bird Box," actually. It's entertaining but there's a lot wrong with it.

Ellen: Well, that's a drag! Yeah, as I said to Bug above, I'd definitely have to avoid political conversations.

Briony: Not at all! There's a lot of terrible stuff out there. Particularly, and I hate to say it, on British Netflix -- I think they haven't negotiated the rights to the back catalogs of a lot of the old Hollywood movies.

Catalyst: North Dakota IS a schlep from where you are! (Probably not as far as Robin having to fly to New Jersey, though!) That is NOT a marijuana plant, but I can see the resemblance, LOL. It's some kind of Japanese foliage plant. We have one in our back garden, actually.

E: He's doing OK, more or less. Some days better than others!

John: LOL! We said the same thing! She has DEFINITELY had work.

Elizabeth: It's called Waterlogue. I've been very impressed with it. "Bird Box" is scary and violent, but it's also ridiculous, which leavens the fear somewhat -- at least I think so.