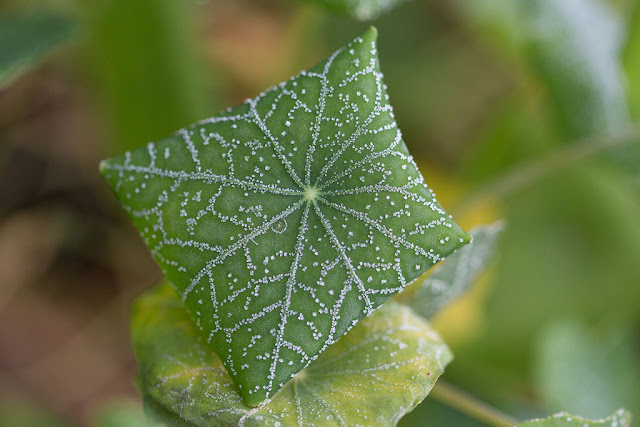 We've had a couple of cold nights, the first truly cold ones of the year. Some of the plants have been nipped, like these nasturtiums, which until now have been growing and even blooming in the bed outside our back door. The cold caused their leaves to go limp at the edges and left a pattern of ice crystals along the veins. 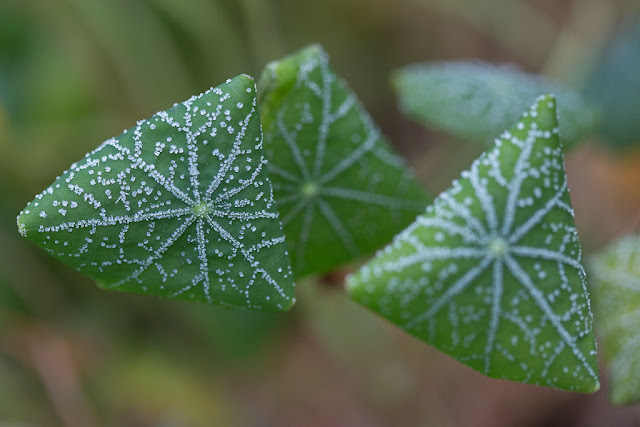 They look like jewelry, or fancy candy, or game pieces. Don't they? 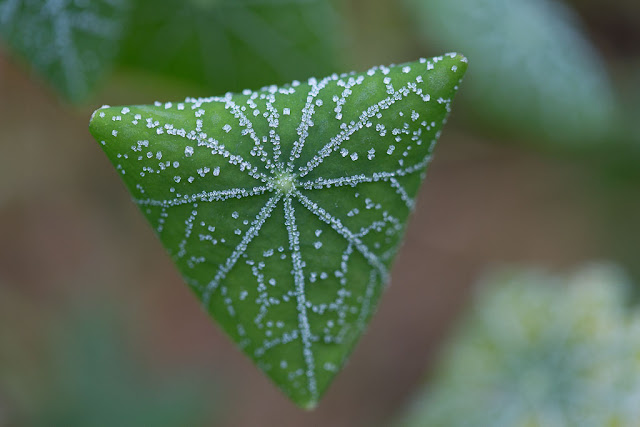 And then we have our camellia... 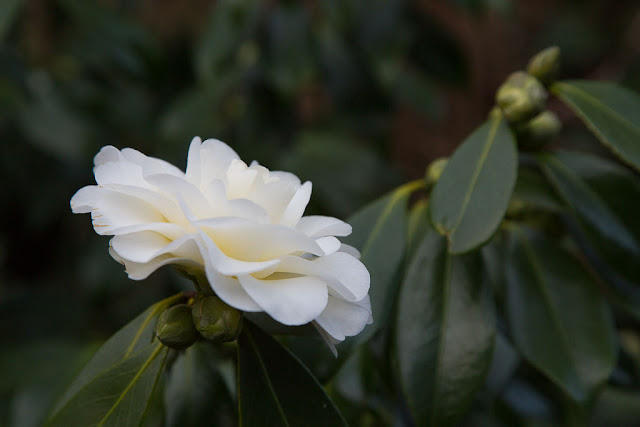 ...which for some reason has decided to put out a couple of blossoms. This bush usually doesn't bloom for a couple more months, but I think I remember seeing some early flowers last year, too, so maybe it's not that unusual. I'm not sure how they're going to react to frost! 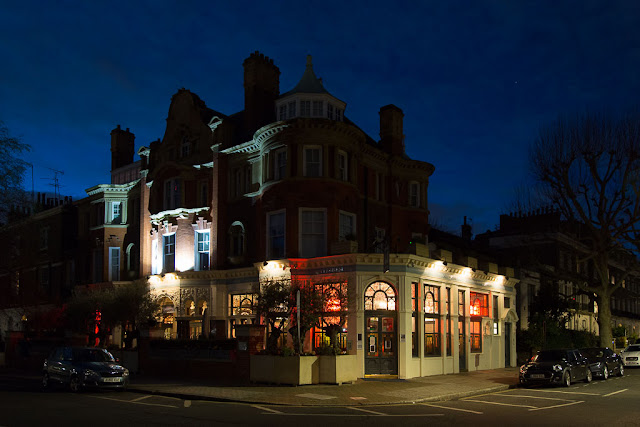 Last night I went out with some co-workers to a pub near our office called Crocker's Folly. It's in a beautiful old building, but it's in a very weird location on a back street in a residential neighborhood -- hence the "folly." (Apparently it was built in the Victorian era by a speculator who'd heard a train station would be erected nearby, and instead, the station went elsewhere.) It's an incredible place, with patterned windows and ceilings and lots of marble inside. We celebrated our quiz team victory!
Posted by Steve Reed at 8:11 AM

Love the origami patterns on the nasturtium leaves!

The nasturtium leaves look beautiful. One more small example of the visual wonders that Nature provides. Also another example of how nothing escapes the roving eye of a quiz champion.

I enjoyed the crazy things nature did to your nasturtium leaves.

Those nasturtiums do look like little gems or maybe tiny pin cushions. The camellia looks like it is floating. The pub looks so sweet and cozy. Thank you for these beauties!

Whoa! You have just given us the gift of seeing something through your eyes that we quite possibly would never have seen before. Thank you, Steve. Those nasturtium leaves are simply works of art.
The camellias should do fine though frosts and freezes. Some of the already blooming flowers may drop but more will come.

Those nasturtium leaves are so beautiful. What a grand icy pattern. The best part of freezin' cold temps!

I think with global warming plants are blooming much earlier. In some places blooming is taking place as much as 90 days earlier.

beautiful shots of the nasturtium leaves. nature is quite artistic.

Those leaves are gorgeous. The patterns are beautiful. In fact, all your photos today are wonderful. I love the bloom and I really like the look of that pub. When I was there two years ago I located a pub that I had tried to find almost 20 years ago. It is in the strangest location on a sort of mews street that is almost impossible to locate. It had been recommended some 20 years ago but I could never find until that last trip.

Those ice etched nasturtium leaves are works of art. Thank you for sharing them with us!

What beautiful photos. The nasturtiums are, as Jennifer commented above "works of art". And that building with Crocker's Folly is wonderful. I was wondering what it must be like to live in an apartment above a pub, though. Noisy, I would think.

All of your photos today are just lovely. The nasturtiums are really spectacular.

Gorgeous pictures of the nasturtium leaves!

The nasturtium leaves are striking! And the photo of the camellia is so beautiful. The petals look so soft I can almost feel them.

The frost on the nasturtium leaves is so intricate - it's beautiful.

Our gardens are buried under snow, and there's more coming tomorrow :)

The nasturtium leaves look like intricately beaded jewellery/trinket pouches. The upper stories of the hotel look spooky and scary and could well be something from the House of Horrors.
Do I sense a move away from rubbish and left objects towards night photography?
Alphie

Briony: Absolutely! If I were a jewelry designer I would be inspired.

Joanne: They DO look like pin-cushions. Someone could make some money capitalizing on that design.

Ms Moon: So far the camellia has shown no sign of being affected. In fact, as far as I can tell, the nasturtiums were the only things to get bit.

Robin: Yeah, frost can work magic in some ways!

Red: I wonder how much of this could be due to climate change. It's hard to tell. Might just be a quirky early flower.

Sharon: There are a lot of tucked-away little pubs in London. People lament the closing of so many pubs, but the fact is, London was wildly oversupplied!

Catalyst: Ordinarily I would say yes, noise would be a problem. But this pub is so secluded I somehow don't think it ever gets very noisy. Frankly, I'm amazed it's still in business.

Sue: This isn't my favorite camellia, actually, because once the flowers age a little bit they get brown at the edges and look terrible. But until then, yes, they are amazingly pretty.

Jenny-O: Woo hoo! Enjoy the snow! We're supposed to get colder, too.

Alphie: Well, night photography is kind of a necessity at this time of year, at least for the working person who's indoors during daylight hours!