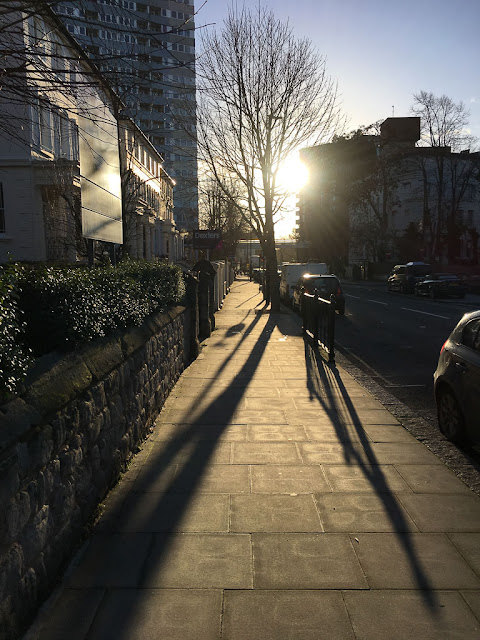 A few nights ago I dreamed that Crosby, Stills and Nash, and possibly Young, were visiting me. I lived in a sunny place in a gigantic beige stucco building with a parking lot, like the Eagles' Hotel California. I bought some new clothes to fit in better with the band -- mustard-colored pants and a long tunic shirt with a pattern of intersecting circles in green, red, yellow and orange. I wore little round purple John Lennon glasses. I was vaguely aware that I looked ridiculous because C,S,N and possibly Y were not dressed like that at all. But I felt so groovy.

At one point I saw the band slouching around on the lawn but I didn't interact with them. They were just hanging out, looking vaguely as they did on the cover of their first album. I thought, "Stephen Stills looks so young!" Because of course, in my dream, I was seeing them all as if it were 1969.

Stephen Stills, in fact, is 74 years old now. David Crosby is 77! And who ever thought that would happen?

How is it that I have entered a world where all my musical idols are senior citizens? Joan Baez is 78. Joni Mitchell is 75. Paul McCartney is 76. Melanie is a relatively youthful 71. It's shocking, honestly -- not that there's anything wrong with being a senior citizen, but these were all the rebellious youth, right?

Anyway, I have no idea what any of this means, except that deep in my head I'm still living in the past, and I'm continually surprised by the present.

The loveseat did disappear from the sidewalk yesterday morning, not long after we put it out. I assume the council collected it as promised. It's nice to have that gone -- and now the living room seems so spacious. A little too spacious, maybe. Weirdly spacious.

Dave thinks his cold is on the mend, thank goodness. He's going to work today after taking yesterday off. He went to the doctor but she said it was a virus and she couldn't really do anything -- still, she praised him for coming in, because he's on medication that suppresses his immune system (for the Crohn's) and they have to keep an eye on that kind of thing. I haven't contracted the cold, knock on wood. I thought I might be getting it yesterday, because I had a headache when I woke up, but in retrospect that could have been the wine I consumed at Cirque du Soleil the night before.

We're getting some arctic weather -- supposedly a low of 28º F tomorrow -- and possibly some snow tonight. (I know that's nothing compared to what's happening in parts of North America.) I'm trying to decide whether to muscle that fig tree into the garden shed. Ugh. I don't think it would die if we left it out, but I'm not sure I want to risk it.

(Photo: Yesterday on my walk to work.)
Posted by Steve Reed at 7:18 AM

Dreams can come true. I am sure that if you scour the internet you will be able to locate "a long tunic shirt with a pattern of intersecting circles in green, red, yellow and orange". Not common garb for librarians but sometimes it's good to break the mould.

I love the tunic, and the purple John Lennon specs. Could this be the first hint that you're about to enter the phase of life where nostalgia hits hardest?

Ah, Stephen Stills...my second rock and roll crush (I was 8 when I laid eyes on the Beatles on Ed Sullivan in 1964 and fell in love with George). He was on a break from CSNY when he toured with Chris Hillman in a band called Manasass and I went to see them at the Philadelphia Spectrum, my first rock concert.

I was at a CSNY concert (with Santana) when they were on their Reunion tour, on Aug 9, 1974, when the announcement came over the PA (tannoy) that Richard Nixon had resigned.

He married my favorite French pop star, Veronique Sanson, and their son opened for my late-in-life rock and roll crush, Paul Weller, when he played New York City Town Hall in the early 2000s.

So, yeah, me and Steve go way back, but I've never dreamed of him. I rarely dream of famous people and it's usually people who I don't have any particular feelings for at all, and sometimes it takes me a while to put a name to the face: Chirs O'Donnel, for one. I have no idea why he's in my brain pan.

I dream of Keith Richards sometimes. He's always the age he is now, which is 75, and very gentle and sweet. Every one treats him with gentleness and respect.
Probably not too far off the truth.
But forget asking how our musical idols are senior citizens- how did I become one?
I truly am struggling with the knowledge that I'll be sixty-five this year.
I love your outfit in the dream. I can see it perfectly. You look good in it, Steve!

My in ground fig has been fine after minus ten and I am in Southern Scotland if you are worried wrap some fleece around the upper part and bubble wrap round the pot.Jessica.

I love that dream. I will always be grateful that I came of age when I did and was immersed in some great music and incredible songwriters. I wish dreams came with photos, I would love to see you in that outfit.

Where do these strange dreams come from?? It does make one wonder!
I've been hearing about cold blasts happening all over. We had one about a week ago here but, it's back to normal mild winter weather again. I did notice that many places had their plants covered last week just in case.

what a weird dream. I'm going to be 69. that shocks me more than all those rebellious rockers being in their 70s.

Dreams are not logical. There can be arts from different times or places that make things out of whack!

And yet--last week, a couple volunteers and I sorted the (many & unsorted) LP records at the thrift store where I work, and there was a Melanie album.
When I saw it, I started to sing,
"I've got a brand new part of roller skates."

Amazing what sticks in your head

Sometimes - and especially after listening to some of the musicians you mentioned - I get a real fright when I happen to look in the mirror. Where has the time gone etc.
Hope Dave's cold is truly over. These viruses can be so drawn out when you take immunesuppressants. I hate that.

And Neil Young is 73! 'Course I'm 78 so I guess you and all of the other CSNYR group are just spring chickens! By the way here in the medium-high country of Arizona it was 64 yesterday. Down in Phoenix they're adding layers, I hear. Of sun tan lotion.

I wonder sometimes how hard it must be to be an aging rock star, never again to sound or look the way they did when thousands of adoring fans cheered for them. I think I'd rather be me; it would be too depressing to be them! I feel like I've improved over time rather than deteriorated, ha ha

What a fun dream! I'm with YP - I think you should definitely recreate the dream outfit.

We originally had a forecast for some snow (!!!) tonight, but now it's just going to be clear & in the upper 20s. At least I don't still live in Xenia where it will be in the upper teens!

I would love to see you in the actual outfit...Did you eat any mushrooms before bed?

You're a gay man you should be dreaming of zac efron

I'm 63 and I really feel that I grew up in such an incredible time. And I went to art school in the mid-70's - what a time! However, I never seem to dream about it. I saw an infomercial for a Time-Life production of performances from inductions to the Rock and Roll Hall of Frame. It showed short clips of the performances included. I actually considered buying it but it's very expensive and I can't see myself watching it more than once. CSN were playing in all their glory - I think they were singing with James Taylor in one part. Maybe you caught part of on TV when you were in the US and it stuck in your brain?