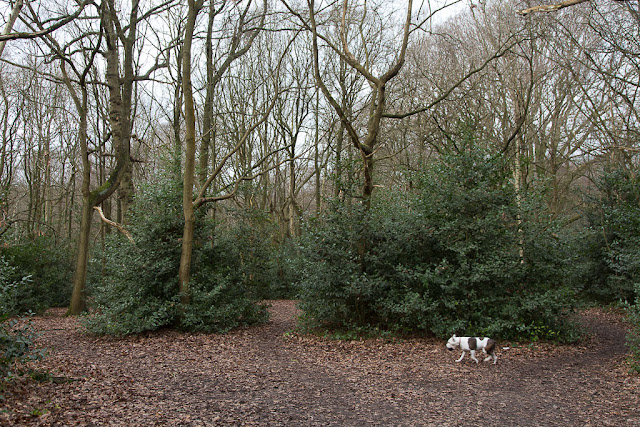 After a morning of puttering around the house, doing things like vacuuming (how does a house get dirty when no one is in it?) and adding soil to a cyclamen on the front porch that had been excavated by a squirrel, I inaugurated the new year by taking Olga to Hampstead Heath. 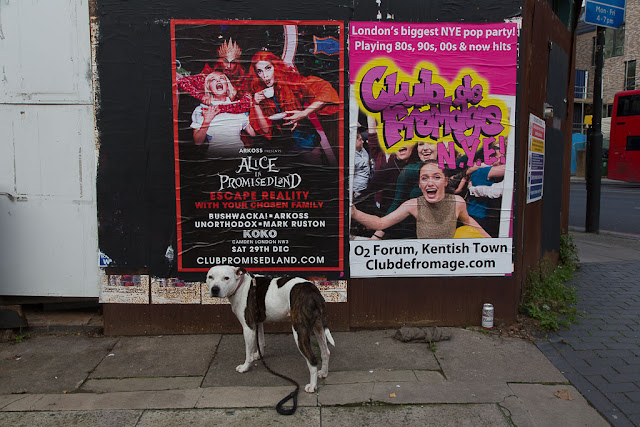 We passed these posters on the way. Olga had hoped to go to the NYE party at Club de Fromage. Look at her -- she's so disappointed she turned her back to it. 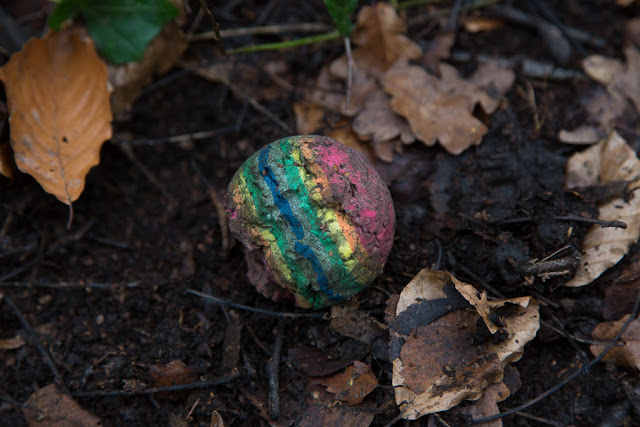 We found this chewed-up rainbow dog ball on the Heath. The stratified layers remind me of a class I took in college called "Geology of National Parks," in which we learned all about the rock layers of the Grand Canyon. The only one I remember now is the Vishnu schist, clearly represented here by that red area. 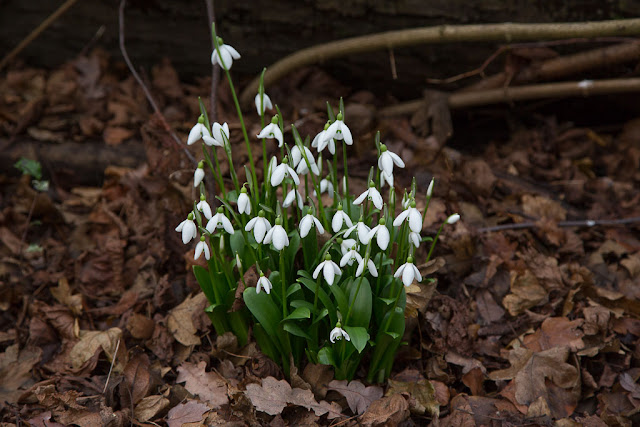 London's earliest clump of snowdrops is once again blooming before any others. At least they're consistent!

After all the cleaning, organizing and walking, we took it easy in the evening. While Dave worked on music for school, I watched "Buster and Billie," an old favorite, even with its ultimately tragic outcome. I like the rural Southern atmosphere, although it struck me this time that there are no black people in that movie, which is pretty bizarre considering it's set in rural Georgia in 1948. I suppose their absence conveys the depth of segregation in that society. Jan-Michael Vincent was certainly a looker; it's a shame his life later took such a turn for the worse.
Posted by Steve Reed at 6:58 AM

In one of my recent posts I said how I was looking forward to the snowdrops and there they are already. I haven't seen any myself but how lovely they look and what an uplift to know that the croci will be here soon with a taste of longer days sunshine.
Once again, just love Olga.
Briony
x

Normal life is resumed. Those snowdrops are amazingly early. We have got daffodils pushing through in our garden - far too early. According to the awful "Daily Star" we are on the brink of a Siberian winter with polar bears and penguins migrating to our streets. The spring flowers haven't got a chance.

Those snowdrops are so pretty. Life back to normal. I even went back to work today.

Coming back from a trip is always lots of work. Maybe that's why my wife has the irritating habit of cleaning the house before we leave?

It's frosty cold here too. What's happened to the weather lately? I have no idea. Love seeing Olga out on her walk. And, I am definitely going to google Vishnu schist. What a grand name!

New Year's Day is a total laze about here. We had the Twilight Zone marathon on all day.

I wondered what happened to Jan Michael Vincent. He was such a good looking guy with sort of a wry affect on screen - and then he was gone. What a wasted life he's had. Here in the desert, it's really cold, 32F this morning. We came here to get away from the cold, and here it is.

I Googled Jan Michael Vincent and was shocked by his life story. Then looked at photos of him when he was young and then today. Amazing what booze and drugs apparently did to a violent guy.

We have snowdrops here too. Without the drops part. We've just had our seventh or eighth snowfall (I'm losing track). Apparently it's going to be like this all winter. However, it's precipitation, and that's good for the earth and wells.

I had such a crush on Jan Michael Vincent in the 1970s. Val Kilmer is another heartthrob who is not aging well, even before he got cancer. Don't get fat, and don't do drugs, if you want to be able to look at yourself in the mirror on your 60th birthday.

And to think that he played a cello on a ledge. Maybe that was the beginning of the end of his sane life.

Briony: Yes, it's always good to see them again, but this clump really IS strange. It's so early every year. I don't know whether it's simply the location or the variety of bulb.

YP: We have daffodils coming up, too, although none close to flowering.

Red: I cleaned the house before we left, too, and it was STILL dirty when we returned. I don't understand it.

Robin: Wikipedia refers to it by the more general term "Vishnu Basement Rocks," or something like that. Maybe it's not all technically schist...? But schist was definitely the term I learned.

Allison: I sort of lost track of him after the '70s. I never watched "Airwolf," when I guess he was at his most popular. But he was definitely on the radar of The Gays at the time and he was much-discussed! LOL

Catalyst: Yeah, it's a tragic story, really. I think he must have had some underlying issues that led him down those dark paths.

Jenny-O: Wow! That's a lot of snow already! We haven't had any yet. (knock wood)

Vivian: Sound advice, for sure! I never got the Val Kilmer thing. He just didn't do it for me.

Susan: OK, I had to look up that reference! (I never watched "Airwolf.") I imagine the source of his troubles, whatever it is, appeared long before then -- but daredevil cello-playing certainly didn't help. :)