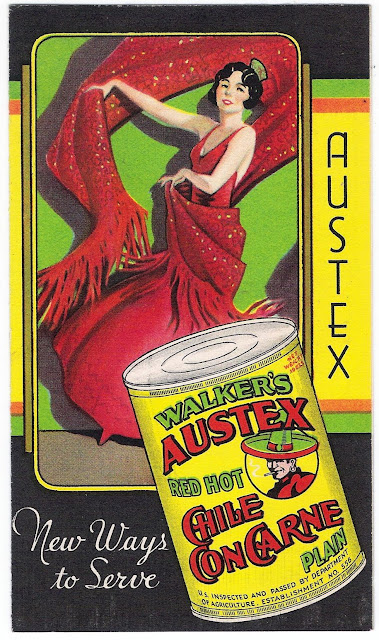 Remember how my stepmother gave Dave and me some old cookbooks that belonged to her grandmother? We found this little pamphlet tucked inside one of them. I love the bright color scheme and '30s graphics! 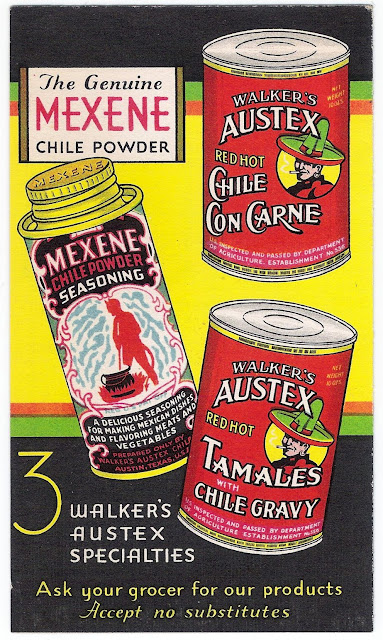 I looked up Walker's Austex to see if the brand still exists. Austex chili sauce is still available, and I assume it's the descendant of this earlier brand, having been bought and sold by different food conglomerates over the years. Apparently Austex and some related brands were connected with cases of botulism about ten years ago. Yikes!

Mexene chili powder still exists, too, produced by another manufacturer. That fun bright red devil is no longer on the label. 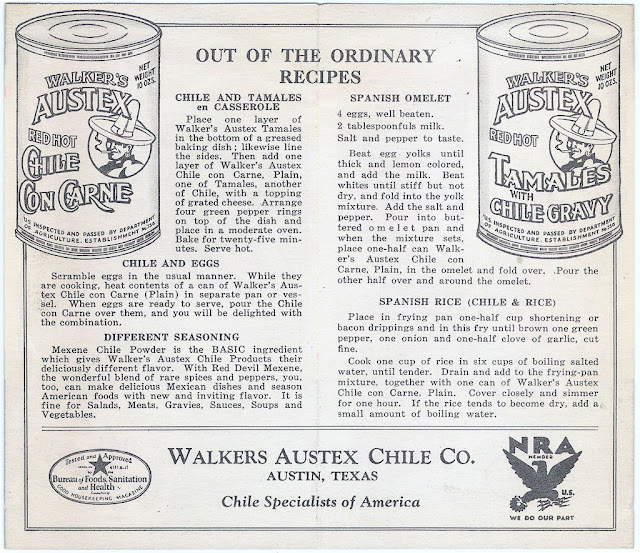 This is the inside. The recipes seem rather uninspired, but maybe they weren't back then, when surely Mexican food was a very exotic thing to many Americans.

(I'm just noticing that the brochure spells chili like the country, Chile. Apparently this is a Spanish-language spelling often used in the Southwest. To make things even more interesting, the British use two Ls, spelling it "chilli.")

By the way, you may notice that "NRA" logo at the bottom-right corner. It gave me pause, too! But it's not the NRA we all know and, um, love. Instead it's the National Recovery Administration, a federal agency that existed between 1933 and 1935 to curb the excesses of capitalism and ensure better treatment for workers -- a forerunner of the National Labor Relations Act.

And there you have it -- a colorful little piece of history in our cookbooks!
Posted by Steve Reed at 8:46 AM

When those darned English folk say, "It's chilly today!" it is hard to know if they are talking about the weather or what is on the menu for dinner!

the yellow can says 'plain', the red can does not. wonder what the difference was/is. I think I remember that. for some reason the name Austex rang a bell.

What a cool find in those old cookbooks. Even little pamphlets tell interesting stories of the times.

You get a colorful recipe book bu a lot of history. Most people would look at this and pass on. thanks for doing a little digging.

I think those recipes sound pretty darn good. And I'm sure they WERE exotic for back in those days.
Love the packaging and graphics. What a great find, Steve!

I remember seeing products with labels that looked similar to these. My dad used to love canned tamales. He bought them all the time. I bet that's what I'm remembering. I don't recall that he ever bought the chili con carne. That is a fun discovery inside those cookbooks.

Curious to me that someone who lived in Florida would have an interest in Mexican food recipes. Cuban, I would expect but not Mexican. Fascinating find and I'll bet those old cookbooks are a treat.

Reminds me of a standing joke when I used to make chili. I would tell the kids it was hot and they would ask "heat hot" or "chilly (chili) hot"? Ha ha. I guess you had to be there. lol

I think they should have left the devil in the logo. I wonder why they didn't?

It was kind of your stepmother to gift you and Dave those cookbooks. You could write several interesting posts on food history based on some of the recipes in them. I hope you enjoy and let us know if Dave decides to try out any of the recipes.

Well for all of my long life, I assumed that chilli was always spelt "chilli". I never knew there were other ways of spelling it. Talk about us all living in parallel universes!

Love the colors and graphics! Frameable kitchen art? I like the layout of the interior, also. My Dad was a manager of an A&P food market in upstate New York when I was growing up. Their store brand was called "Ann Page." I've got a collection of spice jars and tins, mostly from the 50s and 60s. Love the graphics and the memories. Will have to check if it includes a tin of chili powder!

Fascinating about the NRA, so much the opposite of the current holder of that acronym!

Hi, Steve!
You commented on my blog that you loved that I'd looked up the edition of a book in Starsky & Hutch---which gave me a nudge--I'd been meaning to comment on this post that I *love* the research you've done here!

Both examples illustrate what you say later about the Internet--it makes it so EASY to did down to this level--what a pleasure!

Of course the Internet has its bad side, but I always say, my high school was as full of nastiness as the Internet--(and while the original post says kids didn't take bullying home with them, that's not how I remember it--fear is sticky and goes to bed with you... NOT that I was ever bullied, but I remember well the fear of transgressing social norms.)

Anyway, I love seeing your brain at work here!