Moon Street, a Film Crew and a Big Green Cat 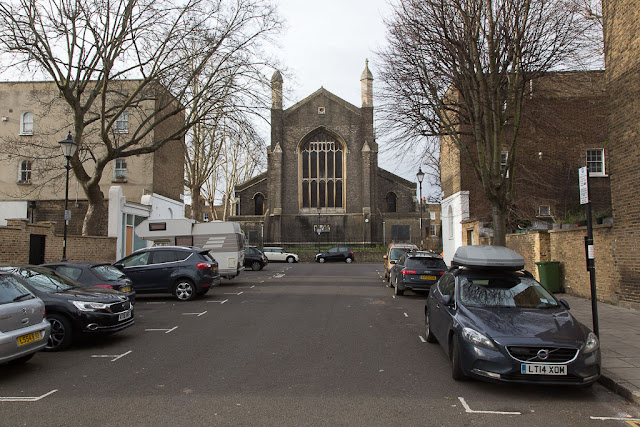 I was feeling a bit cooped up yesterday morning. The sky was gray and although I briefly walked the dog, I'd resigned myself to spending the day more or less inside. But as the morning wore on the sun came out weakly, and I decided to take a walk through Islington.

I started at King's Cross and walked east on Pentonville Road and north through Barnsbury. One of my goals was Cloudesley Square, a neat little neighborhood of white townhouses surrounding a square with a church in the middle. Unfortunately what I took to be the front of the church is under construction and covered with scaffolding -- so here it is from the back. 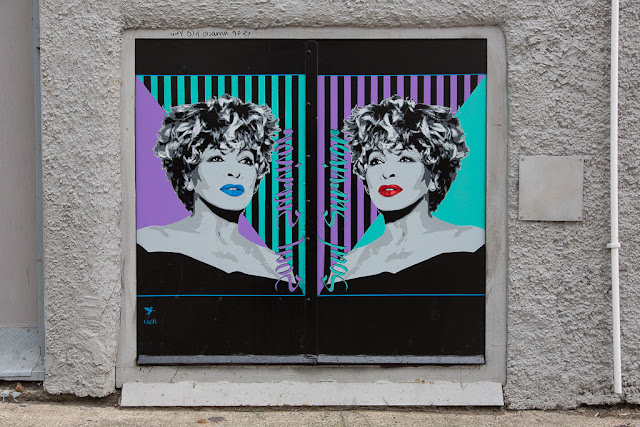 I came across this street art of Tina Turner, which is pretty cool. I especially love the little hand-written message above the art itself: "Why did Obama go?" 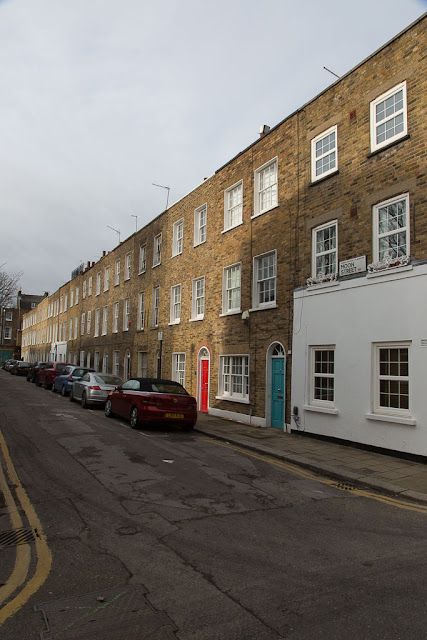 I found a tiny street called Moon Street -- this is pretty much all of it. Doesn't that sound like a great address? I'd love to be able to tell someone I lived at 9 Moon Street in London. It's very Harry Potterish. (And it has the added benefit of sharing a name with Ms. Moon.) 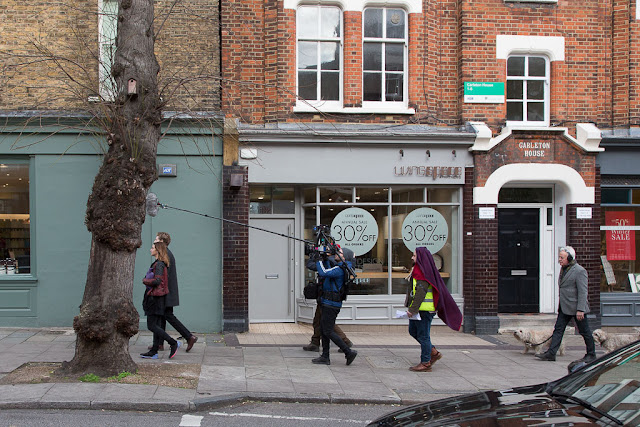 As I walked north near Upper Street, I passed this peculiar group. The man and woman in front (not recognizable to me) were being followed by a film crew including a cameraman and someone carrying a long microphone boom. Then there's that guy in a high-vis vest with a blanket on his head (?) and the guy walking dogs and wearing headphones. It's not a great shot -- I only had time for one -- but you get the point.

For lunch, I stopped at a Starbucks near the Highbury and Islington overground station. I wouldn't normally go to lunch at Starbucks but we have gift cards given to us by Dave's students, so I'm trying to use them. The cashier was a young man, I would guess of Eritrean or Ethiopian descent, who heard my accent and asked if I was on holiday. When he heard I'm originally from Florida he said, "Seriously, man. Why would you move here from Florida?" 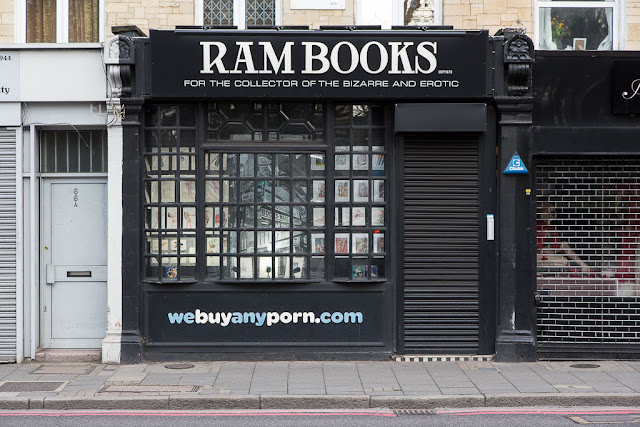 (Side note: Dave and I just watched a four-part British TV show called "Dale Winton's Florida Fly-Drive," in which the well-known British TV host travels around Florida, from St. Augustine to Miami to St. Petersburg and even Weeki Wachee. He was a funny guy, quite camp, and I got a kick out of seeing Florida through his eyes. I was shocked to read just now that he died last April -- I had no idea when we were watching the show that he was no longer with us. I probably saw news of his death at the time but didn't know who he was.)

Anyway, back to my walk. I couldn't resist photographing a shop whose URL is "webuyanyporn.com"! 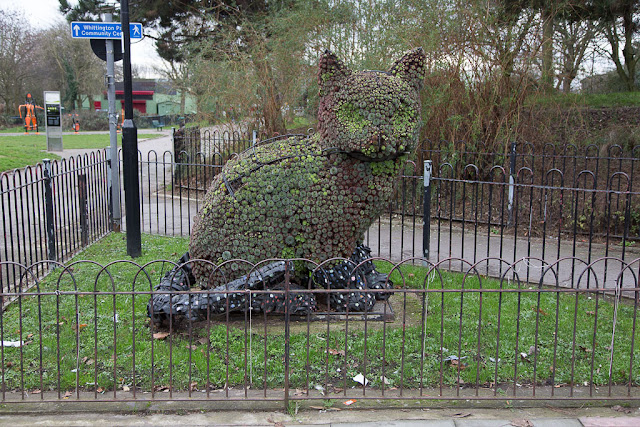 I walked north through Holloway and finished up in Archway, passing a rendition of Dick Whittington's Cat covered in sempervivum plants -- they're called house leeks here in England, but in the states I knew them as hen-and-bitties or hen-and-chicks. Pretty creative!

All in all, it was an excellent day out. As usual, I felt much better engaging with the city and getting some exercise!
Posted by Steve Reed at 6:54 AM

I don't know how you always come up with such interesting posts Steve. We have some streets here with such ugly names and I always thought I just could not live in a street where I had to quote my address to people if it was ugly.
Of course I love the cat.
Briony
x

Did any occupants of Moon Street drop their trousers in order to reveal their bare buttocks?

Mr. P.'s mind does go to places where angels fear to tread.
Too bad that Moon Street doesn't have any trees or plants.
Forgive me. I am cranky this morning. I do love that cat. It's amazing.

Inspiring!
Thanks for sharing your walk!

Makes me want to walk around and record my neighborhood--something I haven't done in several years.
Now I have an iPhone (my 1st), it would be a breeze. (I used to feel self-conscious pulling out a camera, now half the people on the street are holding a smart phone.)

What kind of camera (& lenses?) do you use? (Perhaps you've already written all about that and can link me to that post?)

I especially love spying bits of people's lives in your photos, off to the side--like, who owns a camper van in London? Looks so Midwestern.

Funny, people's ideas about Other Places, like Florida v. London.

On a trip to London when I was young, I told a sales clerk I was from Minnesota.
"I'd love to go there!" he said.
Amazed, I asked him why ever he would want to go to this [boring] state.

"You can barely go 5 minutes in Europe without seeing a house. You have wilderness."

That opened my eyes to how exotic my state is. For instance, there's virgin forest in Duluth, 2.5 hours north, where people's pets risk getten eaten by WOLVES!

Not to mention one of the iconic rivers of the world is 2 miles from me. But I'm so used to it, I don't gasp and say, "Huckleberry Finn!" like some German visitors did when we walked over the Mississippi.

It's good to see our lives afresh!

That ended up being a super day compared to sitting in the house.

I love it when you take us along on these walks through the city. I missed seeing that cat when I was there. The only rendition of Whittington's cat that I saw was a small one sitting on a rock and surrounded by a fence near the entrance to the Archway tube station. I wish I had seen that big one. I don't think I've ever seen a shop so proudly announcing "we buy porn" before. That film crew scene is one of the strangest I've ever seen. There is nothing about it that makes sense. All in all, a fantastic set of experiences and sites.

What a grand walk that turned out to be. Yes, I would love to live on Moon St. too. Or maybe Venus Lane. Great photos and a very cool cat.

A very good walk indeed. I love seeing your part of the world through your lens.

There goes your shot at fame, Steve. If you had run across the street and confronted those two people with some weird question or political rant, you too might have been in that movie. And, as Briony said, of course I love the cat too.

I do love hens and chicks, but I had never heard of Whittington's cat. I just spent a nice half hour reading about him. I found a long story, written for children, which I really enjoyed.

Briony: London is an interesting town! I know what you mean about ugly street names. We've got a few too.

YP: Now THAT would have been a picture!

Ms Moon: It's actually a very cute street. The houses across the street (out of the frame) are much more modern and therefore less interesting, at least to me.

Fresca: I guess whatever we DON'T have seems exotic, right? I use a Canon EOS 5D Mark III camera and two supplemental lenses, a 400mm zoom and, very occasionally, a macro.

Red: I usually find that if I can motivate myself to get out and about, I have a great time!

Sharon: Whittington's cat is a big deal in that part of London. He had some association with that area. Even the local hospital is named for him.

Robin: Venus Lane would definitely be a winner! You know, in all my wandering around London, I never found a neighborhood where the streets are named for planets. How can that be? There's a niche to be filled in the real estate market! (Looking on Google Maps I now see there IS such a neighborhood in Hemel Hempstead, surrounding the wonderfully named "Planets Park.")

Sabine: I've never been to Dublin. Must get there one of these days!

Catalyst: Well, maybe not a political rant. That can be dangerous business these days! I could have ranted about trash on the street, though.

Sue: It's a very popular legend, particularly in that part of London! I'm not sure I knew about it before moving here.

seriously though, why did obama go?

loved going on your walk with you.