Retro Goodies and a Doomed Apple 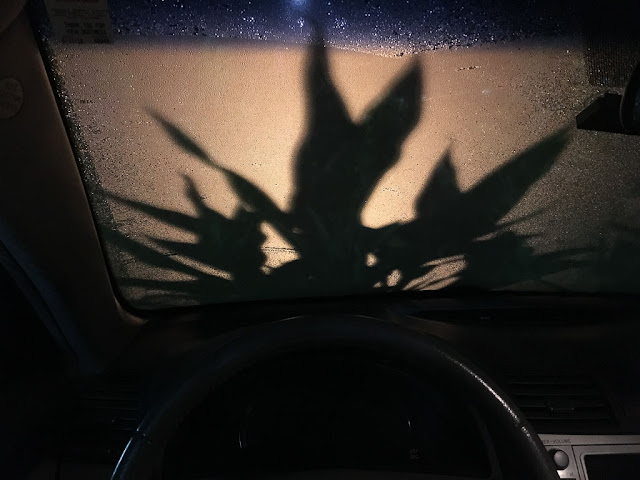 Since yesterday's post was so long and wordy, let's have a visual one today -- photos from the ol' iPhone!

First, a monstrous early-morning shadow on the windshield of our borrowed car in Florida. Creepy yet tropical, kind of like the Creature from the Black Lagoon. 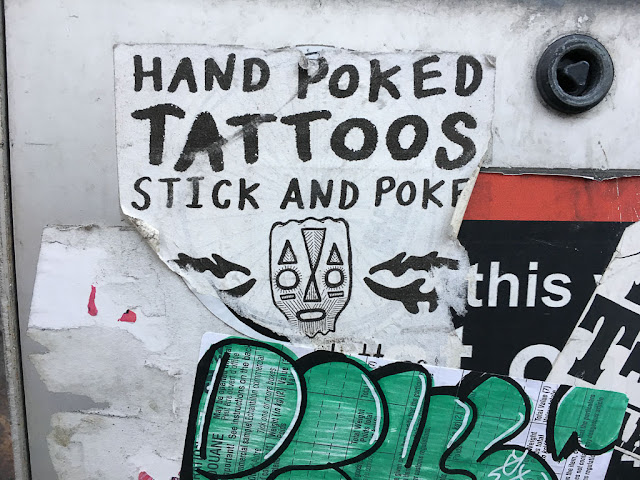 I came across this sticker on the street in West Hampstead. Having once received a hand-poked tattoo, I'm not sure what the advantage is -- except that like film or vinyl records, it has a sort of retro romanticism. (I've mentioned my tattoo a couple of times before.) 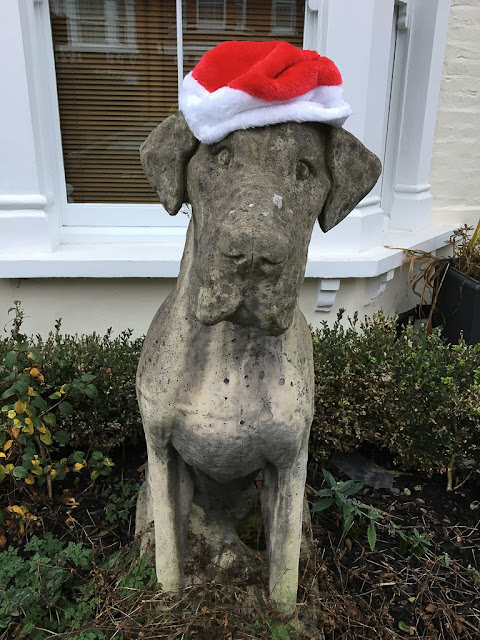 Merry Christmas from the dog statue on Broomsleigh Street! 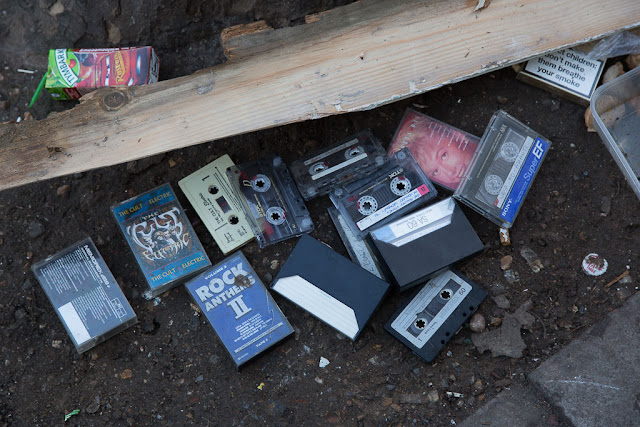 I came across more discarded cassettes the other day while walking Olga. This was an interesting assortment, everything from Simon & Garfunkel, The Rolling Stones and The Cult (whoever they were) to Doris Day. Someone had eclectic tastes! 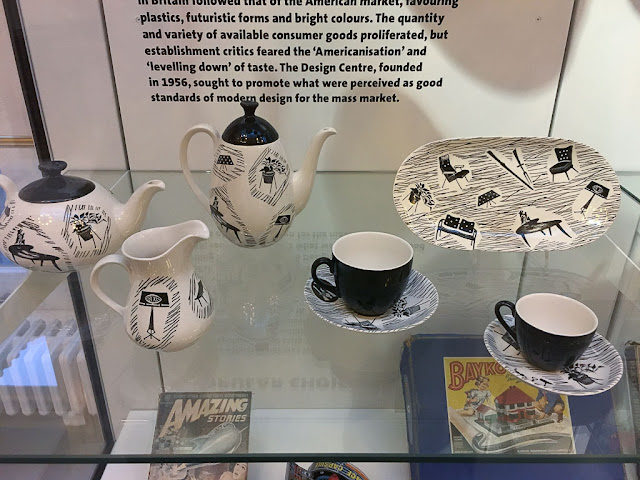 This '50s dinnerware was on display in the V&A. I actually used to own a few pieces of this pattern, called "Homemaker," which was British. I bought mine at a thrift shop in Plant City, Fla., of all places. I don't have it now -- I think I gave it to some friends. Museum pieces! Who would have believed it?! 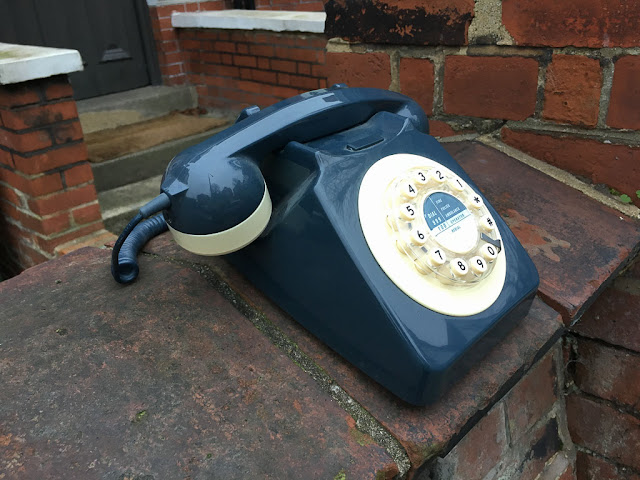 Speaking of museum pieces, I found this phone waiting for a taker on a garden wall near our flat. I didn't take it, but I bet someone did. (Actually, I don't think it's that old -- it has touch-tone buttons. It's just made to look old.) 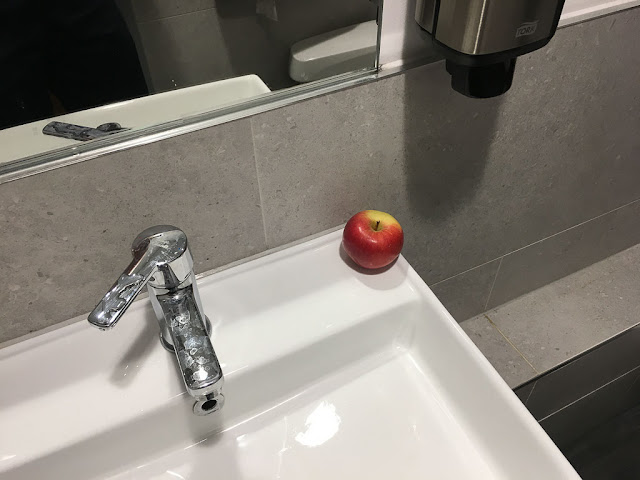 And speaking of finding things, I came across this apple on a sink in a bathroom at work. I felt sorry for it, because although it looked fine, it was as good as garbage. Nobody, and I mean nobody, wants an apple found in a public restroom. 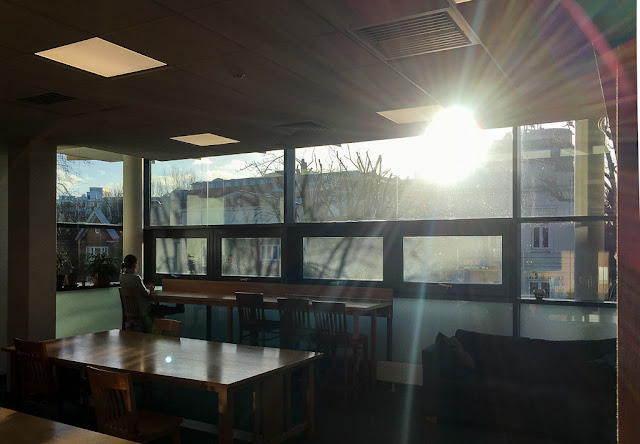 Finally, this was the view yesterday afternoon in our library reference room, with a blazing sun lighting up our west-facing windows. In England, a sunny day in winter is always a thing to be appreciated!
Posted by Steve Reed at 7:06 AM

I just spotted the box of " Bayko" underneath the crockery. I was given Bayko as a present after having my tonsils out when I was 6. A forerunner of Lego in a way I suppose!

Am I nobody? I want that apple!

That last picture is everything that I love about your photography. I love the geometry, the lone figure, and the over-all sweetness of it. I could look at it for a long time. It's very beautiful.

To my untrained and fairly undiscerning eye, your iPhone photos are delicious. That last one, especially but the apple on the sink is pretty awesome too.
I didn't know you had a tattoo! I honestly thought about getting one of Ixchel in Cozumel. And perhaps a map of the island. But once again, I did not. I'd have to get it on the last day because you can't go swimming for awhile after you get it, I think and why be in Cozumel if you can't get in that water? And I never want to waste my last day.
Sort of a Catch-22.
But I don't think I'd get a stick-and-poke one. Well, maybe. Who knows?

well, my one and only tattoo is a yin/yang. how's that for cliche. how disappointing that the phone is a fake. we had a very old rotary dial phone for years, older than the ones I grew up with. I loved that old retro thing.

Cool photos, and so true about that apple.

A fun selection of shots today. I love that phone. I would have been tempted for a few minutes. I love those dishes but finding them in a museum must have been a surprise.

"Amazing Stories"---in the V&A [shelf below your crockery]!
I wonder what the connection is with your crockery... Oh, never mind, I just read the sign: they represent the fear of "Americanisation" and "leveling down", on the one hand, and, on the other, the promotion of GOOD mass-market design. Whew. I love the Golden Age of Sci-Fi.

I have a fragile copy of that old magazine in the display case at my thrift store--priced all of $5.

Some great photos, especially the last one. BUT. I went back and read both of your posts mentioning your Tangier tattoo and in neither one was their a photograph of it. C'mon Steve, EXPOSE yourself! (Might want to wash your feet first, though.)

I'm amazed at what you find when you're out and about. I rarely see things unless I'm in the bush. When I'm in the bush I'm watching for signs of what might be there. When I'm on the street I watch where I'm going.

Steve, wow, I love your last photograph. It invites me right in to take a seat! Looks like a lovely, quiet space to sit and read and think. The sun rays are gorgeous!

That Homemaker dish pattern is cool.

I've known people who don't even wash an apple that's been in a grocery store pile. They'd probably eat that one :)