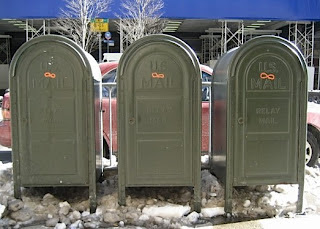 I've always liked the infinity sign, and the concept of infinity, too. The idea that anything would go on forever seems sort of antithetical to the Buddhist emphasis on transience and impermanence as absolute conditions of existence, but I think the key is, nothing lasts forever unchanged. The molecules of the Universe may persist, but they're constantly joining and abandoning various compounds and undergoing other changes themselves. So there is infinity, but its definition is a never-ending stream of change.

When I lived in Morocco in 1992-94, I took a trip to Tangier with some friends. We stayed with another friend who lived in the Casbah, deep among the winding streets once walked by literary expats like Paul Bowles and William S. Burroughs (not to mention not-so-literary ones like Barbara Hutton). I could sit on my friend's roof and see most of the city below us, and beyond that, the Mediterranean, Gibraltar and Spain. Tangier is not an easy place to be a tourist, because you're a constant target for hucksters and drug pushers and all manner of shady characters, but it can feel beautiful and exotic.

Anyway, one of the friends accompanying us on this little tour was a painter who also designed and gave tattoos. One morning we all decided to get tattoos, which Stacey delivered by hand with a (sterilized) basting needle. It sounds really primitive, and I guess it was - she wrapped a thread around the needle to hold the ink and then just lightly jabbed our skin over and over to implant the ink below the surface. Yeah, it kinda hurt.

For my tattoo, I chose the infinity sign. I think Stacey was a little disappointed I didn't want something requiring a bit more artistic flair - one of my friends chose a fish, another a swallow in flight - but I wanted to keep it simple. I thought it embodied some sense of my fledgling Buddhist practice, the idea that things change and rise up and subside, but persist on some level nonetheless. (My ideas about Buddhism were fuzzy at the time - they're still fuzzy, but at least now I recognize that!)

So on my outer right foot, just above my heel, I still have my infinity sign from Tangier - my only tattoo.
Posted by Steve Reed at 9:14 AM