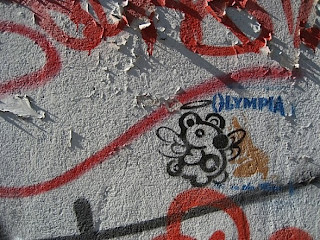 Isn't Olympia a brand of beer? And what's up with the haloed bear?

I've finally finished with Flickr, at least for the time being. I've uploaded virtually my whole back catalog, at least the stuff I think people might be interested in. (Not my family birthday parties, in other words.) I was very single-minded about it, spending the better part of two days uploading, which is kind of how I do things - I get crazy about them (especially when they're new) and then cool off gradually.

We had a powerful, cleansing rain yesterday, washing down all the streets and buildings and drenching the daffodils. I went to the Zendo in the morning and the wind and rain were really howling by the time I left to go home, around noon. We even had some thunder, which I don't hear much in New York - not nearly as much as I did in Florida, anyway. One thing I really miss about Florida is the powerful rain, so this was a nice reminder.

Having spent so much time in front of the computer, I'm looking forward to getting back to a more normal routine today.
Posted by Steve Reed at 10:41 AM