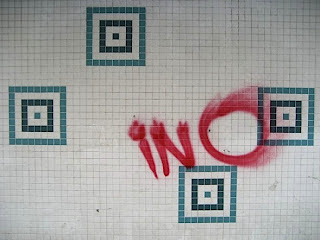 The New York Times had a funny article yesterday about tensions that develop between neighbors over the use of the hallway. Some neighbors have a tendency to leave umbrellas, shoes and even strollers outside their apartments, which can make others a little crazy.

In my building, we usually don't have this problem. My neighbor next door sometimes leaves umbrellas in the hall for days after a rain, but only once has it stayed there so long that I felt obligated to fold it and hang it on his doorknob. (After which it promptly disappeared.)

I get along OK with all my neighbors, thankfully. I exchange friendly chats with Frank, the lawyer across the hall, and occasionally see Jonathan, Frank's next door neighbor, at the gym. My neighbor Dennis keeps the noise down and never causes any trouble. The fifth apartment on my floor is inhabited by a ghost - it's rented to Carol, but I've only seen her once or twice in the five years I've lived here, and in fact I'm pretty sure she lives elsewhere. I always wonder what's behind the door of that apartment.

My upstairs neighbor tends to be awake at odd hours and sometimes clunks around in the middle of the night, apparently moving furniture - she's up there right now, clunking around, which is what brought this topic to mind. My downstairs neighbor sometimes gets a little enthusiastic with her music. But I think in both cases the noise is due more to the construction of the building than any offense on their part. I think we have thin ceilings, acoustically if not structurally.

We're all in such close quarters in this town that I've found it pays to just let things slide. I've complained once to the downstairs neighbor about music, and once to a neighbor on my floor who had his stereo cranked up REALLY loud while he was in the shower. Otherwise, I liken all the sounds around me to the television I could always hear in the living room as I lay in bed as a child - a comforting presence, a sign of companionship.
Posted by Steve Reed at 10:43 AM