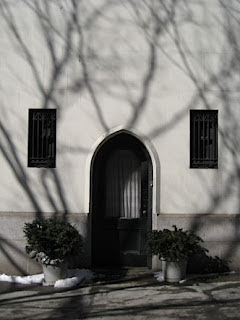 Another wintry-looking shot, which is still appropriate, given the chilly weather we've been having lately - gray skies, snow flurries, overcoats. It's 31 degrees out right now, which is unheard of for Easter. I worry about all the daffodil buds and the Japanese magnolias and other blooming things, but maybe they're built for this sort of uncertainty...

Had a busy day yesterday: I had lunch with an old friend from Florida who's visiting New York, someone I haven't seen in a couple of years. And then I met up with my friend Rob and we went to the Bronx Zoo, where we checked in with the gorillas and grizzlies and the agitated-looking polar bear. (You'd think he'd be the happiest one of all with these temperatures.) The zoo has a wild dog exhibit which is really great.

Which reminds me, randomly, that I have been meaning to post this clip from my trip to Botswana last summer. It shows the wild dogs that we saw there. It was taken by a co-traveler, a guy from France who then posted it to YouTube, bless him.

Rob and I thought about seeing a movie last night, but given the sad state of movies at the moment, we couldn't find anything that we wanted to spend $10.25 to see. So I stayed home and watched, of all things, "Sheena," a really dreadful film from 1984 starring Tanya Roberts as Sheena, Queen of the Jungle. I saw this movie in the theater when it first came out. I was a freshman in college, and after I saw it and went back to the dorms, all the other guys said, "Yeah, I know why you wanted to see THAT!" But no, I didn't care about Tanya Roberts and her animal-skin bikini; I just wanted to see Africa.

And speaking of wild animals - if you can stand one more tangent - I am happy to report that my cat seems to have settled into her quarters. She's now using the bed: 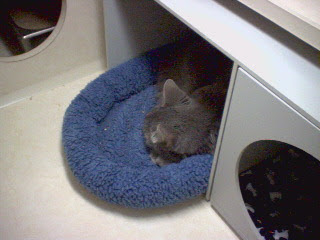 The hospital called me yesterday and said she is eating well and seems to be adapting, though she's still cantankerous. They covered her cage, which keeps her more calm. She can't see the amusing "cat videos" that way, but somehow I think she doesn't mind.
Posted by Steve Reed at 11:07 AM