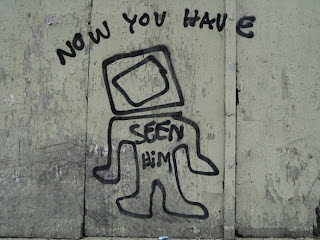 I really like this image, at the corner of Second Avenue and Houston. It's a little creepy, even. It seems to allude to television. Any ideas?

I saw an excellent play last night - Christopher Plummer and Brian Dennehy in "Inherit the Wind." I saw this as a kid in a stage production at the university where my parents taught - it's about the "Scopes Monkey Trial," when a teacher was tried in the South for teaching evolution. (As a kid that trial seemed so primitive. Now it seems probable!) The play's message of moderation and its suspicious approach to extremist faith seems especially relevant now, when our culture and others are more steeped in their extremist elements. Both Plummer and Dennehy are amazing actors, disappearing into their parts so completely that you forget who you're watching. Somehow, it becomes Plummer's play by the end. He definitely emerges as the lion.

So it turns out I have a cold. I think this is probably what was at the root of my ill feelings over the weekend, when I suspected the radioactive cat. It is indisputably a cold.

Still, just in case, the cat is staying in the bathroom at night, at least through the end of this week. She hates it, but I give her Fancy Feast when she gets out, and that seems to mollify her.
Posted by Steve Reed at 10:36 AM