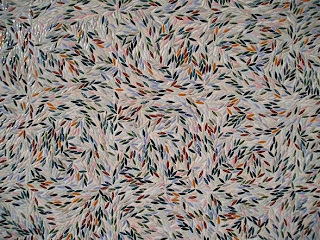 Today is a first for "Shadows and Light" - a guest photographer! These photos come courtesy of my friend Sarah, who occasionally reads my blog and knows the kind of visual stuff I'm into.

A few months ago, Sarah and her mom, two of my favorite Tampanians (they live in my hometown of Tampa, Fla.) went to a little antique store near their house called "Sock Monkey." (Even New York City doesn't have a store called "Sock Monkey," at least as far as I know.)

What does Sock Monkey sell? "Just what you would imagine, 'modern' stuff and lots of sock monkeys of all sizes," Sarah writes. "But the outside of the building was fascinating," she wrote. In between the large windows were these mosaic walls, featuring thousands of tiles that seem like little leaves floating in a pond. At first I thought there was a pattern to them, but now, looking more closely, I think they're placed randomly. Sarah marveled at one person placing all those little tiles by hand. 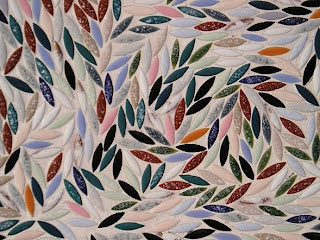 "Someday this building will go," she wrote. "I would love to take away the mosaic walls."

Next time I get back to Tampa, I'm definitely going to check out Sock Monkey.

Thanks to those of you who expressed concern about my entry yesterday. I didn't mean to freak everyone out! Things are fine - I was just in a mood. Don't you ever get in those "escape" moods? I think it has something to do with the "fight or flight" response to stress, as well as perhaps a bit of spring fever. (That was Ched's thought.)

Got a call from the vet yesterday afternoon. They actually ran a geiger counter over my cat (weird, right?) and determined that she has shed enough radiation that she's on track to come home tomorrow, as planned. Today they'll do a blood test just to be sure everything is functioning properly before they let her go.

Last night, while sound asleep, I dreamed that I was having trouble sleeping. Talk about the mind creating its own problems!
Posted by Steve Reed at 10:30 AM