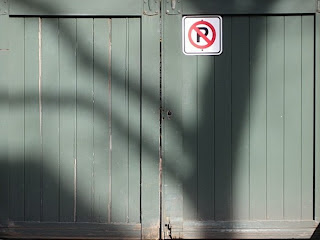 I like the way the shadows in this picture seem to fit around each other, almost like puzzle pieces, and the way they echo the slant in the No Parking sign.

I can't believe that I forgot in yesterday's post to mention the saddest news of the day, the death of Kitty Carlisle Hart. Granted, she was 96, so it's not like she went before her time. But she was such an asset to culture in New York, working to perpetuate cultural activities while periodically appearing on stage herself.

When I was a kid watching "To Tell the Truth," the game show, she was always my favorite panelist. Peggy Cass was funny in a sort of dowdy way, and the men seemed kind of interchangeable, from Bill Cullen to Joe Garagiola. But Kitty Carlisle was always graceful and charming, with her brunette coiffure and her jewels and her distinctive diction. She was the embodiment of high-class glamour. (Arlene Francis fulfilled the same role on "What's My Line?" but I don't remember her as well.)

If you've got some time to kill, here's an episode of "To Tell the Truth" from the '70s, featuring Kitty, Bill Cullen, Joe Garagiola, a possibly tipsy Garry Moore and an uncharacteristically chic Peggy Cass: part 1, Part 2, Part 3, and finale.

I had a chance to see Kitty Carlisle live in Nov. 2004, at a tribute to her and her late husband, Broadway composer Moss Hart, at Lincoln Center. I can't even remember all the stars who attended - Julie Andrews was the emcee - but it was most exciting to see Kitty, who even sang a few songs at age 94. Here was a woman who made movies with the Marx Brothers! It was mind-boggling.

Anyway, I'm sorry to be without her, just as I was sorry to hear about the death last week of Kurt Vonnegut - who I read obsessively in high school and who changed my appreciation of what a book could be.