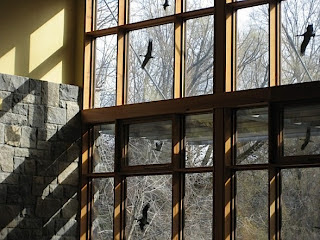 While at the Bronx Zoo on Saturday, Rob and I stopped in at the Dancing Crane Cafe for a snack. The late afternoon sun was slanting rather dramatically through the windows, with their bird decals. Whenever I see sun like this, I think of Edward Hopper, one of my favorite painters, who knew how to use the slanting light from a window to great effect. (His windows weren't quite this complex, but the idea is the same!)

This has been an exhausting weekend! I swear I think I'm more tired today than I was on Friday. I went to the Zendo yesterday morning and then spent all afternoon walking around Chelsea and the Upper West Side, taking photos and killing time until a 6 p.m. dinner party. It was a cold and mostly cloudy day, so I didn't see great shadows, but I got some good street art photos.

The dinner party was hosted by a friend from the Zendo, David. It was a small gathering where I had tomato aspic for the first time - basically gazpacho in Jell-o form! Our conversation covered the cultural spectrum, from NCAA basketball to American Idol to Pan's Labyrinth to opera. I can talk about pretty much anything except opera. That is a cultural black hole for me. I've never seen American Idol (I don't have a television) and I don't really follow sports, but you just have to be up on the news to talk about those. Opera is so far off America's cultural radar that unless you're a fan, you hear very little about it. So for that part of the discussion, I just kept quiet!
Posted by Steve Reed at 11:16 AM