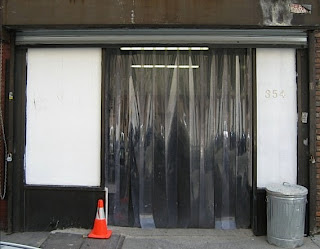 Alex used to live here. Remember him? I was sorry to walk by the other day and see that he was gone, and this storefront utterly white and bland. When I got out my camera and took photos of it, a man came out and asked what I was doing. I tried to explain the concept of "before and after," but I don't think he was a native English speaker and he didn't seem particularly pleased.

Which was just more Bad Energy in a week that has so far been suffused with it. First there was the weather, which I actually enjoyed but which has flooded houses and towns outside the city. There's been my own health, which has been somewhat shaky over the last few days (the radioactive cat is suspect and has indeed been spending each night locked in the bathroom, meowing).

Then, yesterday morning, came the shootings in Virginia. As the horrible magnitude of the slaughter became clear, I began wondering about the disaffection that would cause someone to do such a thing. It's more than just anger - it's a complete separation from life, from the world, a feeling of bitter otherness. Where are people's support networks, the webs of relationships that assist and console? Why are guns so easily accessible?

As I was mulling this over, a friend called me at work to tell me one of his oldest friends - an acquaintance of mine - died Sunday of breast cancer. Quite shocking, and quite suddenly. She was only a few years older than I am.

Finally, my friend David was going to have a birthday dinner last night, but the plans were swamped by the fallout from Sunday's storm. So we went to dinner at a Thai place, and on the way back to my office I ran into a coworker who stunned me with the news that her whole department is apparently being outsourced. Several people I know appear slated to lose their jobs.