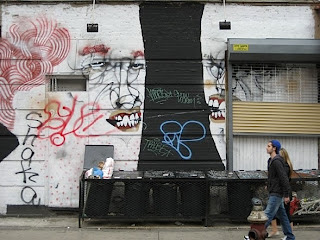 Remember Lister's terrific mural, which I first posted here? Well, time has not been kind. It's been defaced by taggers and, perhaps most heinously, partly obliterated by the installation of a metal security gate.

I have to remind myself that street artists create works like this knowing they're temporary. They don't expect them to last. Still, it's a crime what can happen in just a few short months.

My friend Jesse told me yesterday that he likes my shadow photos more than my street art and graffiti photos, because the shadows involve more artistry on my part - more evidence of my photographic eye. (My friend Kevin has made similar comments - he once called my street art photos "stealing other people's art.")

But as I told Jesse, I think it's important to shoot the street art for documentary purposes, because it doesn't last long. Putting it up on Flickr (as many photographers do) gives us a library of this ephemeral work. And I try to be careful about framing and such, so that I don't just take snapshots.

Anyway, I seem to be in a bit of a street art phase right now, especially on Flickr. Bear with me!
Posted by Steve Reed at 11:13 AM