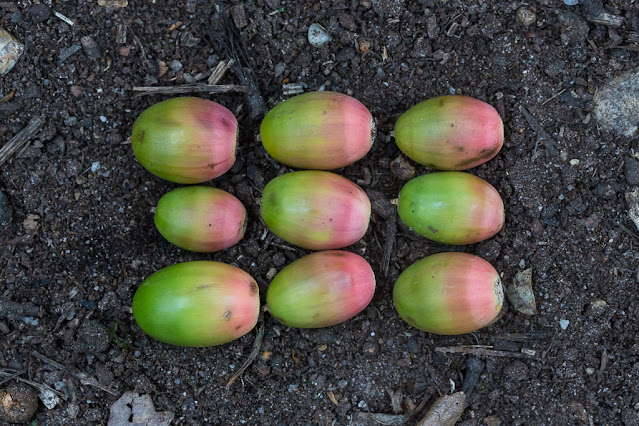 It's beginning to look autumnal on the Heath, with a few slightly yellowing trees and some tired-looking thickets of ferns. I love the color of these acorns.

It was feeling autumnal yesterday, too, with a chilly wind and gray skies. Olga had a great time going after squirrels and generally made a spectacle of herself: 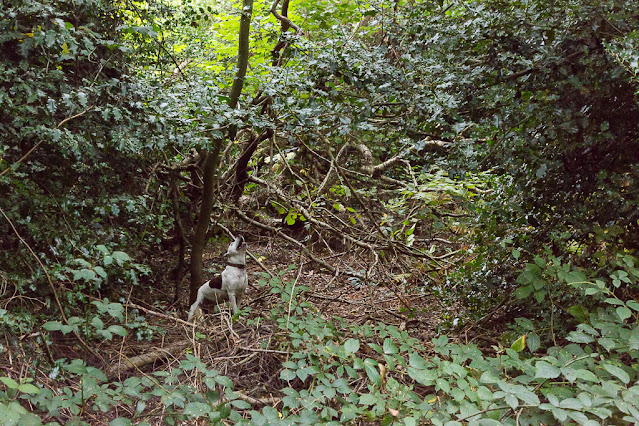 I had the camera set wrong when I took this photo. It was a careless photographer mistake -- forgetting to change the settings from a previous picture. Here's what I originally wound up with: 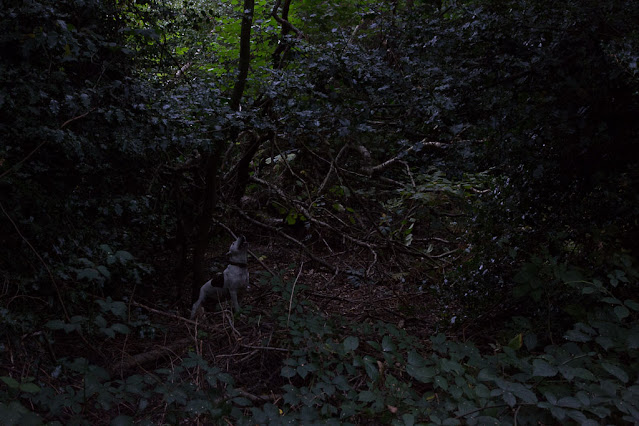 Isn't it amazing that Lightroom could pull so much detail out of that underexposed image?

Other than that, I don't have much to report. I filled out my Florida election ballot, which I will mail today. I did some light trimming and deadheading in the garden. I harvested a few more vegetables: 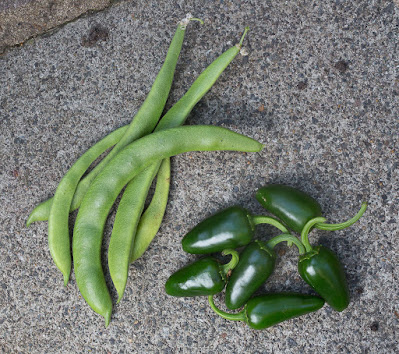 I'm thinking this may be pretty much it. The bean vine and the pepper plants are looking pretty decrepit. I watered them yesterday, but I was thinking at the time, "What's the point?" It's not like they're going to produce another crop.
Dave and I have been watching a show on Netflix called "Borgen," which is basically a Danish version of "The West Wing." As unlikely as it sounds, it's not bad. It's a bit slower than "The West Wing" and of course there are subtitles, but Dave loves political dramas so we've latched onto it. (As if we can stand any more political drama!)
Posted by Steve Reed at 6:20 AM

You removed the nine acorns' cups to reveal their naked bottom halves. It's like pornography. I guess there's a lot of that in your library. You can grin about it behind your mask. Have a nice day.

YP: Your sense of humor is very...peculiar.

Love the pretty acorns.
I am happy with the Autumn, I can't stand the Summers now with such intense heat.
We are currently working our way through films from the 90's that we have watched before, they are coming back fresh, not sure if that's a sign of age that we have forgotten them. lol
Briony
x

I will try harder to leave dull, predictable comments.

I've never used Lightroom, but now I will. That's amazing! The acorn colors are beautiful, too. A great color scheme for painting/decorating a house!

rainbow acorns. they look like tourmalines. it's in the 60s here this morning. those photo apps are pretty amazing.

Whoa! I really can't believe Lightroom was able to get those details! That's crazy! Those acorns are so sweet. Like tiny Easter eggs. I love them. It's warm and muggy here today but supposed to get cooler tomorrow. I would welcome that!

I've had to rescue a few photos in my day and it works much better these days than it did years ago. Great job on that photo of Olga. The county texted me that my ballot will be mailed to me on 10/7. I intend to do the same, fill it out and mail it back immediately.

I like fall with many colors and the smell of leaves that have died .

I like the look of those acorns too. Really lovely.
Now I want to try Lightroom. I've heard of it and many of my photography-loving friends use it, but I haven't checked it out yet. That is quite a fine job of lightening the photo. Well done.

Those acorns looks just like mangoes! And I can totally understand watching political dramas where at least some of those in power are decent humans, and engage the crises of the day with intelligence, empathy, and integrity.

"Borgen" lost me early on, maybe i should give it another try. Subtitles are appreciated, seems to be what I like watching best, anything that is not american.
I am impressed what your photo editor can do! Mine is sadly basic, but then I am a point and shooter.
Your jalapeños look plump , and hot.

The best part of Borgen is when the female Danish prime minister is shown cycling to work. Which is taken from real life, according to an interview in one of our national papers at the time it was shown here.

If you don't mind subtitles too much, we loved The Break (they speak Flemish) and The Twelve (also Flemish) on Netflix.

I've been watching "Borgen," too and really like it. I'm generally not into political stuff at all on the tv, but Danish political stuff is different. I love the acorns that you posted -- just gorgeous! And thank goodness for your vote in temperamental Florida (although I'm making presumptions...).

Our pepper and tomato plants continue to thrive, as do the chives and basil plants. But it's still in the 80's here, though cooling slightly. Our monsoon season was a dismal failure this year. From mid-June to mid-September, only half an inch of rain reported. In a normal season about 2-1/2 inches comes down.

Borgon has been going a while .
I’ve followed it from the beginning
The best thing on tv

I am not into political programs, but I did enjoy watching West Wing. I use Photoshop to fix some of my photos. These programs are amazing. Olga is certainly enjoying herself. Would you believe I had to put the air conditioner on today? Because of the humidity. I just love this little spell of awesome weather and temps we are having. You have a wonderful day, hugs, Edna B.

Borgen was show here quite some time ago with excellent reviews. Yes, for me there is enough real political drama in the world at the moment.

Briony: The '90s produced a lot of good movies! I don't like a hot summer either.

Mitchell: I really like Lightroom. I find it much easier to manage than Photoshop.

Ellen: They DO look very jewel-like. I'd wear them!

Ms Moon: It also helps to shoot pictures in RAW, as opposed to JPG. I shoot in RAW, which gathers more data and hence gives you more to work with when you need to "rescue" a photo.

Sharon: Yeah, the photo processing programs have gotten so much better than they used to be. I mentioned finding Photoshop hard to work with, but to be honest I haven't used it in a very long time. Maybe it's easier now.

Red: I do too! I'm looking forward to the leaves changing.

Robin: I've been very happy with Lightroom. Adobe charges a monthly fee to use it (at least under the plan I have) but it's manageable.

37P: Yes! There are always a few venal characters, but at least it's not the whole friggin' government!

Linda Sue: The first episode was a bit challenging, because it was all about trying to form a coalition government, and Americans don't have any experience with that!

Sabine: Thanks for those tips! I haven't seen those shows but I'll check them out. I wonder if we can get everything on Netflix that you can, and vice versa?

Elizabeth: It's a safe presumption. :)

Catalyst: Yikes! It's been dry everywhere, it seems. Except when it's flooding!

John: We'd never heard of it until very recently. I'm impressed so many people here know about it. I thought we'd discovered something! LOL

Edna: You're definitely warmer than we are. No need for a/c here!

Andrew: That's for sure. Although TV drama can be consoling to watch because, as Rosemarie pointed out above, at least some of the characters seem to act with good motives. Unlike real life!