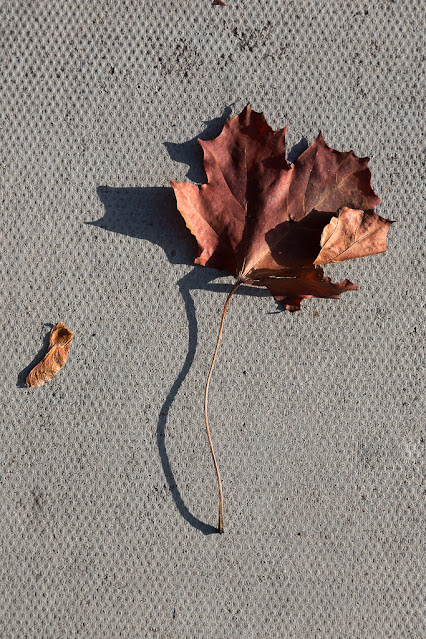 After just a few days of being on campus with all our students, I'm already convinced that social distancing in school is completely impossible.
There are just too many kids, and too many spaces (like hallways) that are impossible to navigate without joining a crowd. I can do it, because I'm not moving around between classes or going to lunch at peak times. But the kids have no choice. Yes, they're all wearing masks, and I'm sure that helps. But the school has apparently abandoned attempts to get kids to travel in certain directions and dictate the flow of hallway traffic -- because, well, kids.
And honestly, many of them seem completely unconcerned. We have signs up all over the library asking them not to move furniture and to keep distance (which means a max of two to a table), and yet twice now I've found three kids all sitting together, virtually shoulder-to-shoulder.
One teacher was telling me he watched one student chew on an ink pen and then loan the same pen to his friend -- right out of his mouth!
I'm also not sure how well these "bubbles" are working -- keeping kids in smaller groups to reduce exposure in case someone gets sick. I'm hearing that the bubbles are quite often broken.
This is going to be an interesting year.
In other news, although Olga will eat virtually anything, I've discovered something she's not crazy about. Corn chips! 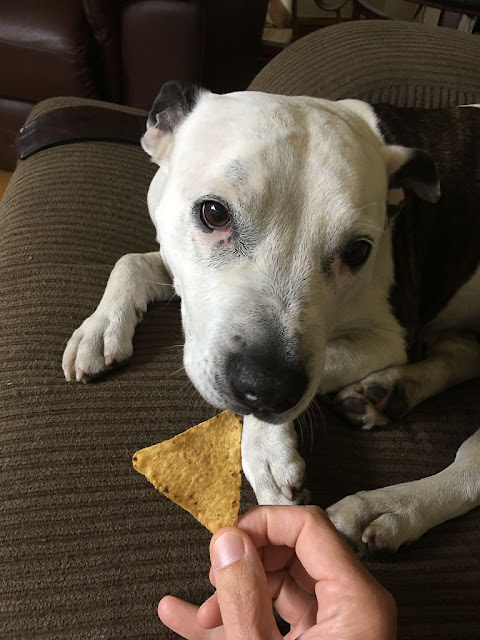 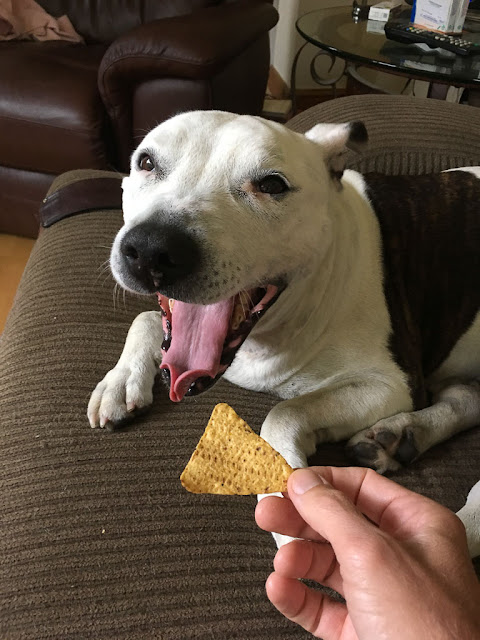 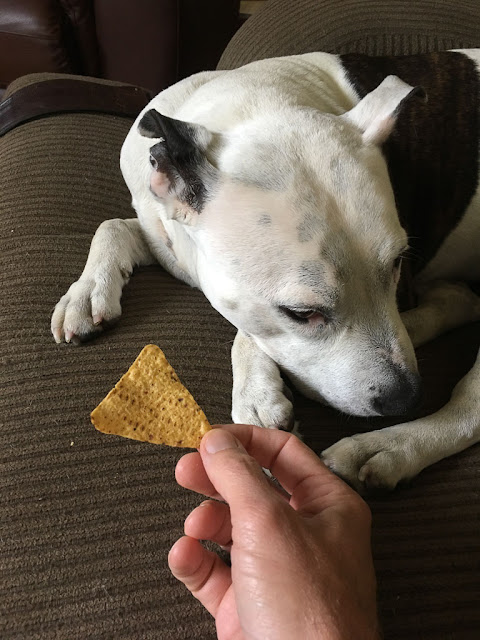 It's surprising, right?! You'd think she'd go for fat and salt. But no!

Dave and I watched an interesting documentary on Thursday night called "The Witness," about the famous murder of Kitty Genovese in New York in 1964. The initial news accounts of her killing reported that 38 neighbors watched as she was stabbed to death in three separate attacks, and didn't even call the police. The documentary picks apart the details of those reports and shows that they were incorrect in critical ways -- people did call the police, many didn't "watch" the crime (they may have heard shouting but they weren't sure what it was), and there were two attacks, not three. I found it quite interesting (although I could have done without the re-enactment of the crime). I was prompted to watch it when I read the obituary last week of one of the witnesses, who held Genovese as she died.
The case illustrates how even top journalists, in pursuit of a good story, can punch up certain details and elide others, ultimately (and probably unintentionally) leading to an incorrect overall report.

Robin Appleby needs to get her act together. If I were the principal, students and staff for that matter would be quivering in their boots as I marched around the corridors enforcing the COVID19 rules. "Mr Reed...may I have a word. Why the **** are you allowing our pupils to disobey social distancing rules in your library? It's your annual appraisal coming up. And I will remind you that this is a team sport so pull your weight laddie!"

I am with Olga on corn chips.

You are right. It is impossible for kids to socially distance. What teachers have to do is protect themselves by maintaining social distance as best they can.

Agreed the teachers must take care of themselves. But the huge problem is the spread among the kids who then take it home to families. Schools here (small New England town) are going remote until at least mid Oct. and then reassessing. Our concern here is the local college which has just brought back 1,500 students from all over the world. They have imposed strict rules but college students aren't much better then your kids. I may never leave the house!

Virtually schooling with my six year old grandson at my house. Started this week. Major kudos for the teachers--what a monumental task! Just trying to get my wiggle-twisting boy to sit in front of his laptop for the half hour blocks of class time in the morning is a major feat (...bribes are in our future--stickers, special snacks, etc.). He is good about doing his other independent work in the afternoon where he gets on separate programs to complete tasks (ones where you do not help them). Has specific amount of time he must spend on each of them, but he usually does more. Teachers will be able to evaluate student's reading and math understanding from these activities and will be setting up smaller groups to focus on these areas in the coming weeks--that will be added to afternoon activities. As I said, kudos to the teachers. So many moving parts. Cannot imagine the effort it would take to socially distance first graders. Students here are not expected to return to schools here until February--at the earliest.

Lily is second-guessing her decision to keep her kids home but then she remembers that if a spike does occur, she'll be so glad she did. But yes- kids. They are NOT going to remember to practice distancing. Or just won't if they do remember. And teachers can't possibly teach and be the distance police all at once.
I don't know. I just don't know.

school is a dilemma fer sure. I haven't found anything Minnie won't eat but then I don't offer her a lot of people food. she does like potato chips though.

I've been wondering how schools are dealing with kids being kids. It will be interesting to see what happens next. We are hearing projections of a spike in cases showing up in November.
How funny that Olga doesn't like corn chips. I don't think I've ever met a dog who wouldn't snap that up right away.

Sorry about what you're coping with at work. I'd be concerned, too.

Corn chips. I have been craving corn chips this week. A peanut butter and corn chips sandwich, especially. And then there's SMASH from Norway. Cone-shaped corn chips dipped in chocolate. Ohhhhhhh

I'm so not surprised to hear that kids are finding it impossible to social distance. I'm impressed they're wearing their masks. Although clearly not always, because one can't chew a pen through a mask. Also, Olga looks so unimpressed, lol.

I think about how I would have responded to social distancing rules when I was in my teens. Not so well, I imagine. I hope everyone stays healthy.
Love those Olga photos. Not much of a fan of chips.
I remember the Kitty Genovese murder from way back when it happened. One of those scary heartbreaking stories that is unforgettable. I have read some of the later news reports about it as well.

I'm not crazy for corn chips either, so I'm with Olga. Offer her something she shouldn't have, like a piece of cheese, and see how quickly she takes it. hahaha. Schooling will be interesting for a while to see what will happen with the virus. Hopefully, things will all work out. Enjoy your day, hugs, Edna B.

Kids are kids. They're very active and push and shove and are very instantaneous. They don't thank a lot before acting.

I am with Olga regarding corn chips.

Most schools here have a two day pattern to keep numbers down, one day homeschooling, one day in school alternating for classes.

Sending kids into a burning building, sounds about right. It is insane how there are options but people are not willing to change course- keeping kids out of schools, I did it for four years with Erik but not for the same reason. Of course i worked from home so it was OK. Anyway, YOU be safe, sir!! Nothing can happen to you, make it so!

School has been open two weeks here in small rural town Kansas and already one middle school student is reported to have the virus. He/she and any close contacts have to stay home for two weeks. We shall see if any more cases pop up in the next few days. Our county went so long with no cases and now it's up to 31. Our granddaughter teaches on the Missouri side of Kansas City and though she is in the classroom she is facing empty desks until the numbers in their county go down a great deal. Right now they are going the wrong way. The Kansas side of Kansas City isn't any better.

The whole situation is just sad. No matter how the kids are taught, it's not as good as it was. I can't imagine trying to keep the really young ones separated.

YP: It's not her fault. It's an impossible situation with everyone on campus at once. BTW, I don't name names or mention the school where I work for a reason -- are you TRYING to get me fired?!

Andrew: Yeah, and I'm fortunate because I'm behind a plastic screen and at a distance from most of the kids. Still, it's a lot of bodies in an enclosed space.

Peter: Yeah, I'm sure you've seen the articles about colleges in other parts of the country. They're hotbeds of infection!

Mary: The US infection rates are far above those in most of Britain, so it makes sense that you'd still be distance learning. I wish we'd gone for a mix, with only some kids in school on alternate days or something like that -- just to reduce the number of people on campus on any given day. But c'est la vie.

Ms Moon: She'll be glad she did in the long run, I think. And that's the thing -- how do teachers teach and still enforce all these new rules?!

Ellen: Olga will eat potato chips usually. (And definitely french fries, like a true English dog.) I think it's the corn she doesn't go for.

Sharon: There's only so much you can do. Kids will be kids!

37P: That's a good question! I didn't think to ask how the teacher saw the student chewing the pen! They're normally very good about keeping their masks on, and they wear them the right way, too.

Robin: It's interesting to see how the thinking on the Kitty Genovese murder has evolved over the years. I wouldn't have responded well to social distancing as a kid, either. It's hard enough to remember as an adult!

Edna: Well, she shouldn't really have a corn chip either, I suppose -- but cheese ALWAYS trumps everything else. Dogs LOVE cheese!

Red: Exactly. They're all about impulse!

Sabine: See, if it were up to me, that's what I'd have done, too. I think the school was probably under significant pressure from parents to get the kids back every day, though. (Just a hunch.) And the British state schools have gone back daily, so we follow the government's thinking.

Linda Sue: People seem determined to get back to "normal life," whatever that is at this point.

Joyce: It will be interesting to see what happens when one of our kids (or several) comes down with the virus. I suppose it's inevitable, and probably sooner rather than later.

Allison: It's too bad they aren't able to interact freely, because that's so much a part of the fun of being young, you know?

Sorry Steve. I will try to remember that privacy point.

No big deal. But just in case these comments are searchable on Google...:)