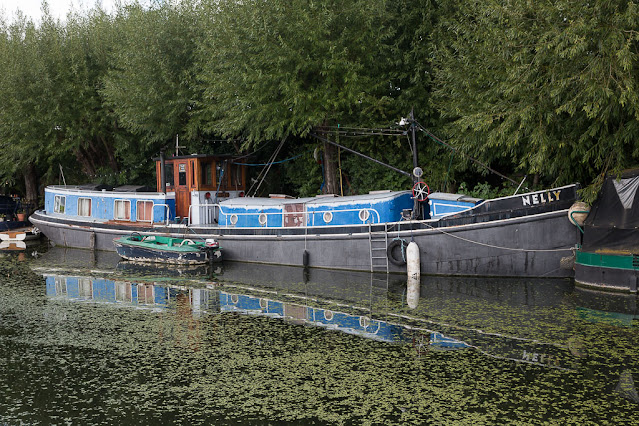 When I walked along the Grand Union Canal on Sunday, I photographed several of the boats. This one looked vaguely familiar and I realized I photographed it in almost the same place eight years ago.

Some of you asked whether these boats ever move or if they're permanently docked. I think the answer is, both. I don't know all the rules and regulations, but I've been told that most boats need to move every so often -- or maybe they simply do because they're boats and their owners want to travel.
Some, though, never move at all. Apparently there are permanent berths here and there along the canals. I bet getting one is difficult if not impossible these days.

So, yeah, that's me telling you about something that I know nothing about. Take it with a grain of salt.

Yesterday afternoon after work I potted up our new chrysanthemum, which is ridiculously HUGE. I was going to put it on the front porch but it's the size of a beach ball and I think it might obstruct traffic! I also potted a broken-off bit of my purple heart plant, which I thought I'd take to school and put in the window of the library. I have a couple of plants for the library, actually. Getting them there is going to be the challenge.

Dave had some drama trying to refill one of his prescriptions. He's been calling the doctor and the pharmacy about it for days. The pharmacy was out of the medicine he usually takes -- it's a sachet of powder and they only had a sugar-free variety -- and the pharmacist couldn't give him the sugar-free unless the doc wrote a new prescription. Getting that new scrip has turned out to be a nightmare. He still doesn't have it, in fact, but the pharmacist took pity on him last night and gave him two sachets to get him through the next few days while all this gets sorted out.
The NHS is a wonderful thing, in many ways, but the problem is we are each just one of literally millions of patients, and it's very easy to feel like a tiny atom lost in a large and complex organism. Especially in a city, where we never see the same doctor -- virtually every time I go to my GP's office, I see a different individual. (I could specify which doctor I want to see but that makes getting an appointment even harder, and it's already difficult!) There's not a sense that anyone knows us -- our medical histories, our allergies and preferences, and certainly not our personalities. Some of that is recorded in our medical charts but in my experience, the doc scans that while he/she is sitting with us (during our specified ten-minute appointment window), and not a moment before. So any time Dave has to deal with the doctors he often has to begin at the beginning.
But hey, we don't pay a dime, except through our taxes. So there's that.
Posted by Steve Reed at 6:23 AM