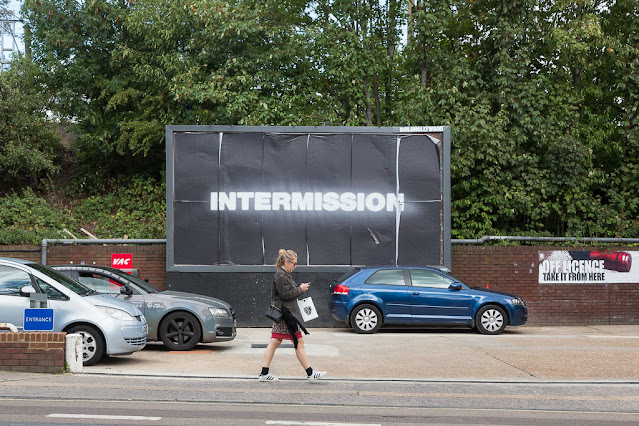 Olga and I came across this sign on Scrubs Lane on Saturday. Curious, isn't it? I love the ambiguity -- is it talking about our Covid-related "intermission" from normal life, or just an "intermission" between purchased advertising on that particular billboard?

Well, I looked into it, and it turns out this is a project by artist Fiona Banner. Here's an article about it -- full of head-spinning "art speak," for those of you who like that sort of thing. ("Ekphrastic transcriptions," for example. What the hell?)
An excerpt: The signs "are arrant demands we pause and acknowledge the epic and everyday sacrifices made during this pandemic interlude, yes, but also to recognise affirmative sides to the social, economic and political impacts of Covid-19. According to Banner the enforced intermission from capitalism affords an opportunity (and) we really should not 'piss it away'; instead it’s time to rethink, recalibrate our addiction to consumer culture. 'We are being told the intermission is over, we’re being told to go shopping and buy stuff. I think we should be questioning whether the intermission is really over. The climate emergency is not over.'" 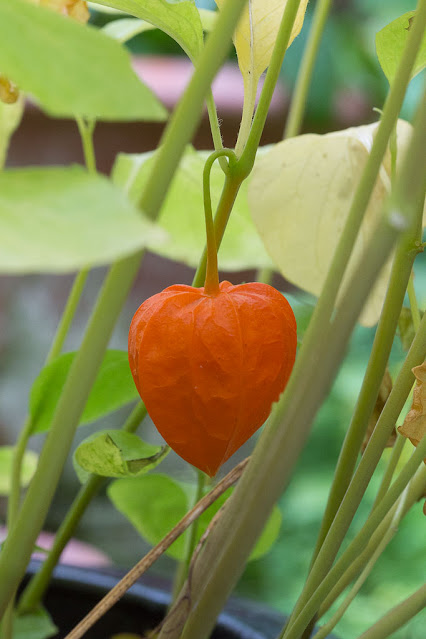 Let's take an intermission from high-flying artistic statements and look at the garden.
For the second year, our Chinese lantern plant has given us exactly one lantern. That's better than none, but I'm not sure why this plant isn't producing them by the dozens, the way other lantern plants seem to. It produces lots of flowers but they don't seem to lead to lanterns. Maybe we need to put it in the ground. Maybe it's not happy in its pot. 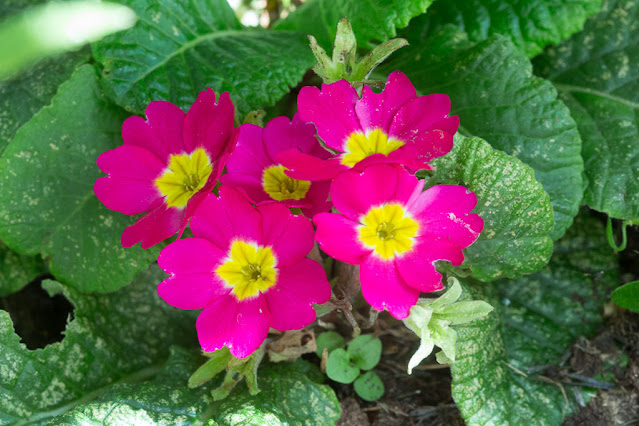 Our primroses are putting forth another burst of blossoms. I'd forgotten that they bloom in fall as well as spring. (Apparently!) 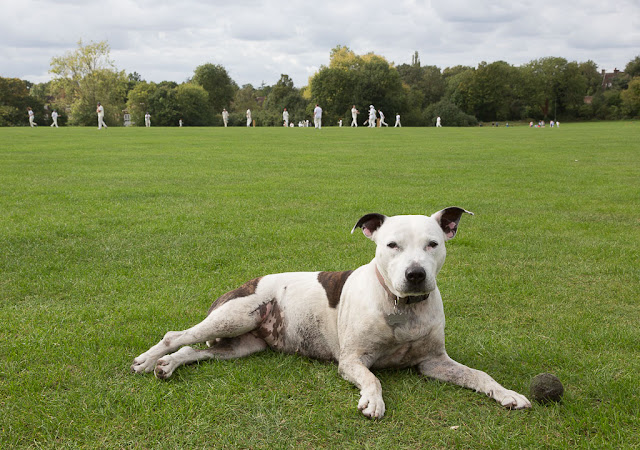 Finally, Olga and I took a long walk to Hampstead Heath yesterday. I was surprised she wanted to go, given our walk the day before, but she was enthusiastic. Once again, I think that anti-inflammatory medicine has done wonders for her. While on the Heath we saw a cricket game in full swing -- I find cricket rather bewildering but it was very English to see all the players in their white sweaters. We also saw boys playing football with a coach, about three dozen picnicking families and at least a hundred kids on the playground at Golders Hill Park. No one seemed to be thinking about masks and social distancing, but I read an article saying that London's Covid infection rate is now apparently very low -- much lower than several cities farther north, which are back in lockdown. No one is sure why that is, but I'm not complaining!
Posted by Steve Reed at 6:56 AM

Gosh, haven't seen a Chinese lantern in ages. They are so (artistically speaking) "dimensional". A very good friend of mine, we have known each other from the sandpit, is an artist. Prize winning. Including New York this, and Cannes that, and what not. Painter, photographer - the two going hand in hand as what both need is a good eye. An eye which, if I may so, you, Steve, do have.

The two of us go back to the sandpit. His paintings are works of art. Not least because of the time he takes over painstaking detailing. In private conversation he calls a spade a spade, yet, and this is why I am relating it to you, some of his (written) copy when talking about his work is, I don't know, not exactly incomprehensible, but a machete to fight your way through the jungle may come in handy.

The "Intermission" (and the idea behind it) true social comment. Your take on it adding motion, literally, by capturing that young woman striding across the car park. Juxtaposition. The stagnant and the flow of movement. There you go, Steve, I can do art speak too. Though, in this/your case not only am I being sincere I do know what I am talking about. As I hope you do too.

I love the art project.. and Olga. Glad she's doing so well. I wonder, too, if the lantern needs to be in the ground. However, my mother had one in a terrarium with about 2 inches of soil (dirt, really). It sat on the balcony, watered when needed, and produced an abundance of lanterns every year... which she then stuck in a vase.

I would love to see you in white cricket gear. Holding your cricket bat at the stumps, I would come tearing down the other end like Fiery Fred Trueman the famous Yorkshire fast bowler. Then I'd let one rip at 100mph. You wouldn't stand a chance mate! "QWZAT!". The umpire raises his index finger.
"And that's another duck for Reed. He cuts a forlorn figure as he trudges back to the pavilion. Oh dear!"

Oh yes, sadly I have some understanding of cricket. It can't be avoided here.

Nice of the cricket players to pose in the background for an Olga photograph. :)

Perhaps we could come up with a different term rather than "art" for some of the things we call art now. However, unlike Ursula, I admit that I have no idea what I'm talking about.
It must be so gratifying to see Olga in less pain.

Remember Barbara Kruger's art in the 80s?
Text over black-and-white photos--commenting on consumerism and AIDS:
Your body is a battleground (1985)
I shop therefore I am (1987)

It was revolutionary at the time---and now the time is again ripe for revolution.

Some people live in another world with their own specific language. they want to keep everybody else out of that place.

Your description of "art speak" and that quote reminded me so much of what I was reading when I went to that exhibit at the Heard Museum. I took photos of the signs along with the art work and then I tried to pare it down to one or two sentences for the posts I did. That was quite a description for a work containing one word on a black background.

My daughter in law has a beautiful lantern plant that has several lanterns. At least you are getting the one lantern. It's beautiful. I love the orange color. The primrose are beautiful. As for Olga, she looks rather happy with herself in this photo. She's such a pretty girl. Enjoy your day, hugs, Edna B.

Olga! And that fascinating lantern plant. I've never seen one of those or even heard of it except through you, Steve.

Interesting art and art speak. A little bit silly and only a tiny bit revelatory, but transformative and enlightening in that nonsensical manner without any remaining thought to follow. LOL!
I hope you can find out why you're only getting one lantern. It's really so beautiful and would be so nice if there were more.
Olga is such a cutie.

I totally skipped over the artspeak and I have made my living as an artist but I have always thought art speak was pretentious and the main reason I never really hung around with artists.

I grew up with cricket as a national fever. Odd to realize it has played no role in my adult life. Beautiful solitary lantern.