A Tornado of Thoughts 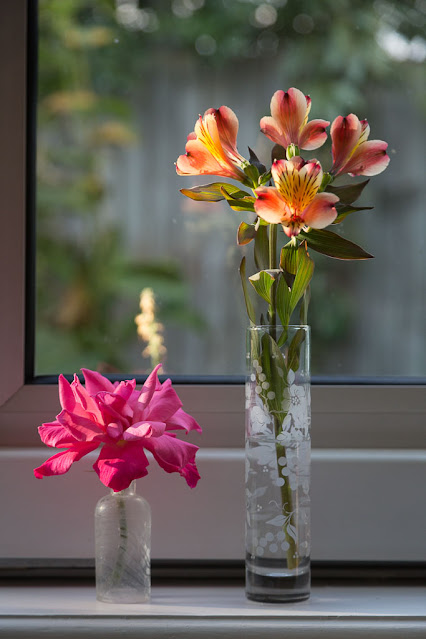 A busy morning at home yesterday. I did some trimming in the garden and brought in a couple of our pink roses, which are still producing a second flush of blooms. I put one in the living room next to a stalk of Peruvian lily that's already been on our windowsill for about two weeks -- that stuff just lasts and lasts. I put the other in the kitchen: 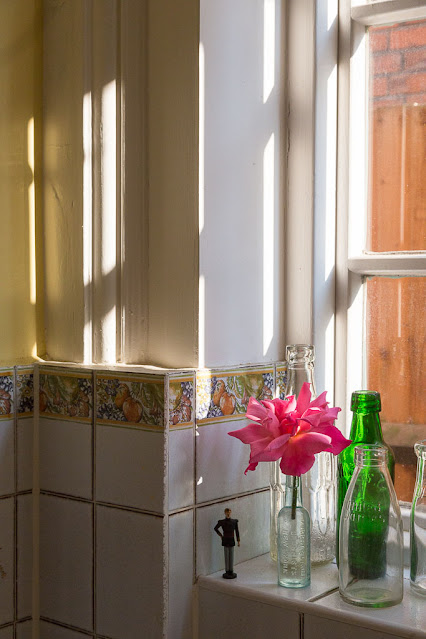 I swept the house with our new vacuum cleaner, which seems positively super-powered after the tired whine of our old machine. I did laundry. I cleaned the dining room windowsill and washed down and watered all the orchids.

Of course, all this cleaning and organizing is probably a psychological reaction to YET ANOTHER piece of terrible news that I can't control -- the death of Ruth Bader Ginsburg and the specter of Donald Trump appointing another Supreme Court justice. I am trying to be philosophical about it. There are a lot of people in America, largely but not exclusively religious, who want the changes another conservative justice could bring -- especially an end to legalized abortion. Of course I think it's abhorrent that we would do away with a woman's right to choose her reproductive destiny, to force her to submit her body and her privacy to laws largely written by men. But part of me says, well, this is Democracy. This is our system. I don't mean to be too sanguine -- I think we have to continue to fight the pro-choice battle as long as we can. But an angrier voice inside me says, "FINE. You want more abortion restrictions? Go for it. See how miserable you make your neighbors and daughters and nieces. See how many women you kill."

I just do not get some religious people. I grew up going to church every week, and I think church served a purpose in my life when I was young -- it helped me develop a moral center, it taught me to be kind and to consider the needs of others. But my family always considered religion as a sort of social glue, to be taken in a metaphorical sense. All those stories in the Bible -- the virgin birth and the loaves and fishes, the faith healing, the good Samaritan -- didn't really happen. They're vehicles meant to teach us how to live kinder, more productive lives.

The literalists who blindly believe every word in the Bible to be true, the extremists who twist religion into a tool of persecution (apparently completely unaware that that's what they're doing) -- well, as I said, I don't understand them. And of course there are the Mitch McConnells, the political opportunists who have no shame and no principles, and say and do whatever they can to win their battles. Republicans, sadly, are much better at playing that game than modern Democrats are. 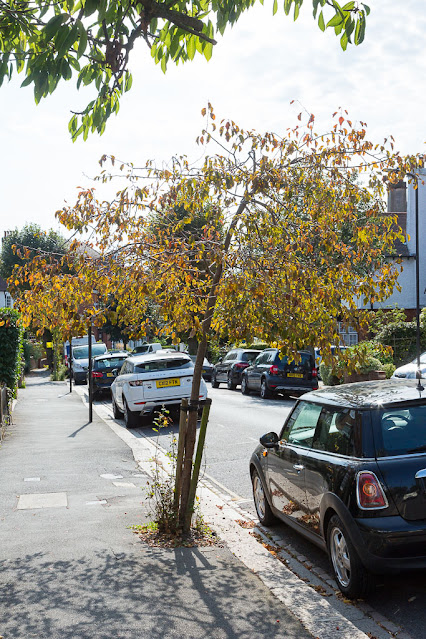 As you can tell, my head is swirling.

Let's talk about the once-viney tree. Remember how I took it some water several days ago? This is what it looks like -- kind of pathetic, right? Yellowed and shriveled. I've been afraid that it might be dying, and I will feel terrible if that happens, even though I'm sure my removal of the vines wouldn't cause it to die. If it does expire, something else must be going on, and I have some theories but who knows. I still feel weirdly responsible. 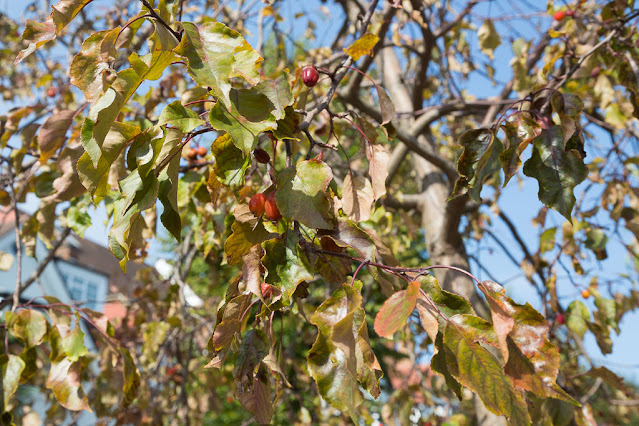 Then again, maybe it's not dying at all. Maybe this is just the color it wears at this time of year, and we couldn't see it before, with the tree so shrouded in vines. Or maybe now that it's exposed to so much sunlight its leaves develop a more coppery tone. They still seem somewhat green, and they're pliable, not dry and dead.

And as Dave pointed out, the tree did develop flowers and fruit -- which seems like a good sign.
I'd write the council tree officer and ask, but I don't want to inadvertently prompt them to replace the tree. So maybe I'll just watch and wait, do my little part by taking it some water now and then, and see what happens. Kind of like what I'm doing with coronavirus, and the Supreme Court, and the election, and Brexit, and climate change, and mass extinction, all the other stomach-churning events going on in the world right now. I can do my little part, but I can't stop the inevitable.
Posted by Steve Reed at 7:02 AM