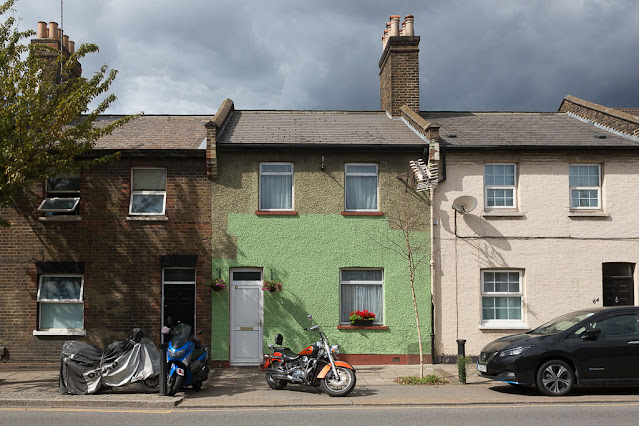 The other day Dave and I were walking home from work when we passed a rubbish pile in front of an apartment building -- and leaning against the pile was a perfectly nice, shiny black-glass digital bathroom scale. (Like this one.) Of course I brought it home. It didn't work, but I thought it might if I bought a new battery.

So yesterday, as we walked home, I popped in to Homebase while Dave went to the grocery store. I bought some potting soil, a chrysanthemum and a battery for the scale. Somehow we managed to lug all that stuff (plus our groceries) back to our flat. And yes! The scale works!

Anyway, I doubt we'll have much cause to weigh ourselves, but now we can if we want to. The other day I had to put my weight on some medical document and I thought, "Geez, I have no idea." I just put 185, and it turns out I was basically right.

My new box of "craft gin" arrived a few days ago, and I've been having my evening G&T with a dash of Campari, as instructed. It's OK. I still haven't found anything to beat a standard G&T, though. 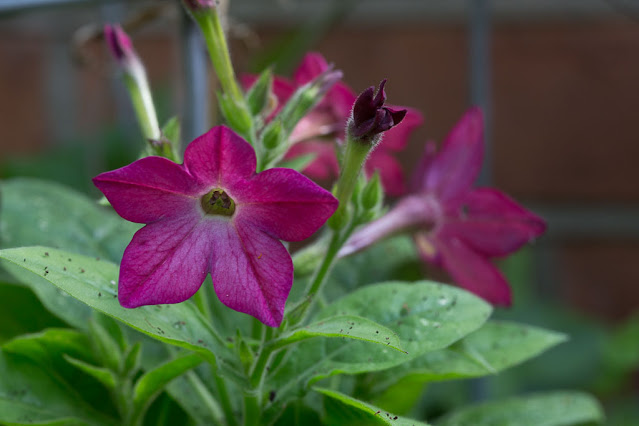 Here's another shot of one of the discarded mystery plants I found while walking the dog -- they're looking really good and blooming up a storm. My money is still on some variety of nicotiana, but I'm not certain about that.
(Top photo: A paint job in progress on Old Oak Common Lane, on Sunday.)
Posted by Steve Reed at 6:42 AM

It looks like Nicotiana to me!
Well done with the scales.....fancy someone throwing them out for want of a battery!
We are off to Oxford this morning to take my son and his girlfriend back after their weekend with us.The other 2 sons and their wife and fiancee were here on Sunday too. A lovely normal feeling weekend.

I like the picture from Old Oak Common Lane because of the distinctive light, the mundanity of the scene, the motorbikes and the unfinished paint job. I wonder if they had a ladder of sufficient length? Shame there wasn't a Reedesque character crossing the composition as usual.

Doesn't the exposed brick house look so much better than the other two.

Your consistent weight is interesting. In my early twenties I was under 60kg and am now just under 80. I did get up to 83 a few years ago. Not really relevant now as I don't go into chat and hook up places, but to an American I can say I am 180lbs. We used to use stones plus pounds but I have forgotten them now.

While we use kilos for everything, for some weird reason baby weight has returned to pounds and young people seem to understand it.

Reminds me of the old joke about someone buying a new Rolls Royce because their current one's ashtray full.

Scales are useful. The other day I came home with groceries - my arms stretched to a point I was wondering what dislocating a joint might feel like, and thought, just for fun: Let's weigh the load. Don't ask. They say that, at a push, you can carry half your actual body weight. Sure. Being strong I'd probably carry a calf if need be. But for HOW LONG?

The other use for scales to weigh your luggage BEFORE setting off to the airport. It's why I prefer driving to flying. I can pack the house minus the kitchen sink and no one will slap a surcharge on. Only the axle will groan.

I marvel at the people whose metabolisms are rock solid like yours, over the course of decades. Mine is completely finicky, which is a nice euphemistic way to put it. But this is the body I have this life so I better be at peace with it. It is the work of a lifetime really. I actually like the green house in the photo, though they need to finish the paint job.

I do like that shot of the houses. I think the green is lovely.
As Rosemarie said- you are very lucky in your metabolism. But you seem to have a very healthy relationship with food and you also get a lot of exercise so there is that too. Nice find on the scale!

So I wonder what the story is on the half painted walk up is?

I hope that paint job is in progress because I'd hate to think it was left that way. That scale is a great score. The blooms on that mystery plant look very much like the plant we call desert rose here. The leaves are different though.

I hope Green House paints the door something jazzy. Amazing that the scale was tossed. You've reminded my I need to weigh myself. I always waver from 175 to 183 now.

We have two scales. One is digital like the one you found and one is crazy old-fashioned that's been in Roger's family for probably 75 years. I weigh myself once a year.
Interesting paint job on that house.

Gosh from your photos I would have put you at between 150 and 160. You must be close to 7 feet tall!

I rather like the new green color on the building. And that plant is beautiful. Gosh, what a lucky find your new scale is. My brother and hubby used to love to take the truck out and go "junking" as they called it. Oh my, the treasures they found! You have a wonderful day, hugs, Edna B.

no scale in this house. I get weighed at my annual and that's often enough for me.

I love the way you bring home things you find on the street. I have done that all my life and love what turns up. Amongst other things, I got the bent plywood metal framed chair I am sitting on, a 1930's large trunk, a dryer to hang clothes on, an orchid, and a mini classical greek looking statue minus its head. This only made it look more classical! Sadly now it is in two pieces as I knocked it over. More than ever now, people seem to leave their unwanted things on the street for people to take, so I don't even need to get things from skips that often. I recently managed to leave a lovely set of metal garden chairs which I think were outside the house of Fred who I used to work with at Arty Party. I was sensible for once!

How typical to throw something out without checking to see if it just needs a new battery. That was a nice find! When I lived in a city, I often toted things home that I found in the trash. It's amazing what some people throw out. What a lovely plant and flower, whatever it is!

Sensible retrieval. I collect dumb things off the street but then our stuff is not as quality as it is there. Today i found a sign and a mask, both of which i left. If I found a scale i would leave that as well, I do not need to know...
Sweet little flower!

My lying-ass digital scale has been relegated to the back of the bathroom closet to think about what it's done wrong!