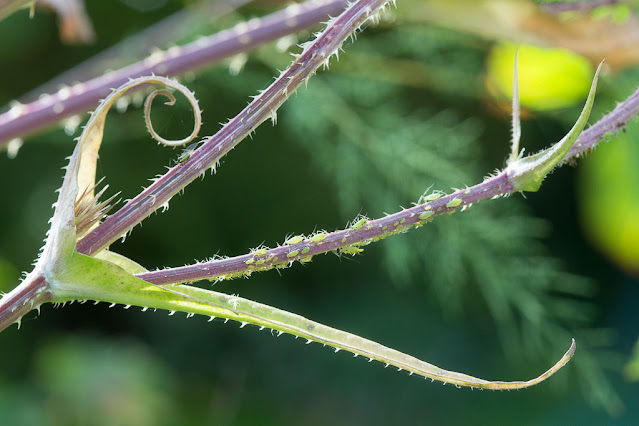 Well, after yesterday's depressing post, let's move on to lighter and happier subjects. How about the overpopulation of aphids in our garden? Can you see them on the stem of the teasel, above? In the case of the teasel it doesn't really matter, because it's already dying back and going to seed, but they're on the gazanias too. I probably should get out there with some soapy water and spray them down.

You may remember about a month ago, I mentioned ordering my credit reports because I was afraid my identity had been used by someone in Massachusetts to get a loan. Well, happily, that appears not to be true. My credit reports look fine. But before I got them, I used an online service called Spokeo to run a report on Internet activity associated with my e-mail address. When I did it, Spokeo said the report would cost something nominal -- a dollar or two. Imagine my surprise when my August credit card bill arrived and I was charged $25 -- and then another $25 this month! Apparently, by running my report, I bought some kind of "membership." Lord! So I had to get that cancelled, and at my insistence they refunded the $25 for September. I'm not sure I got any good information from them anyway.
Fortunately, Dave got a £25 gift card from one of his students to John Lewis, a British department store chain. We used it to order a new vacuum cleaner. Our vacuum is nine years old, and although it's been great, the hose is broken and the carpet-brush no longer reliably revolves. There's enough wrong with it that buying a new one seemed justified. So I figure we broke even -- $25 lost to Spokeo, £25 gained from the gift card.
More drama: Remember our rat problem? Well, although the rats are long gone, we've been waiting all this time for the management company to get the hole in our exterior wall repaired. (It's been covered by temporary screening and a chunk of concrete in the meantime.) The repairmen finally came on Wednesday, and now the outdoor wall looks great, but whatever they did damaged the indoor side of the same wall: 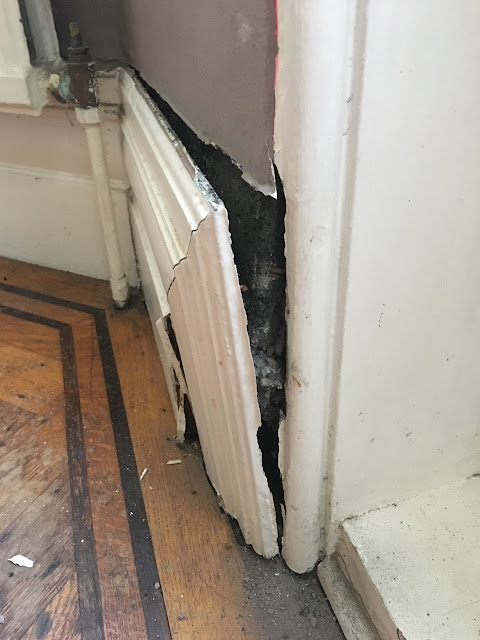 Argh! So I've told the management company and I guess we need another repair -- which hopefully won't take another four months to arrange. I copied the landlord directly on my e-mail so they know the contractors did the damage and not us.

It occurred to me that I haven't made an Olga-cam video for a while, so yesterday I got out the GoPro and took Olga to the cemetery. Woo hoo!


When I first put the harness on her, she didn't want to move. She hasn't worn it in a while and she definitely doesn't like it. I got her going by throwing her Kong.
Some highlights: About a minute in, she begins chasing squirrels -- or, more accurately, the sounds of squirrels -- and I paused the music so you can hear her barking. At 2 1/2 minutes, she manages to get the harness off her back and the camera films just her wagging tail against the sky. Near the end we passed the headstone where the dolls have been -- you'll see me point to it -- and they're entirely gone now. Oh, and at the very end, I took the camera off Olga and filmed her walking. When we come up the steps to our house, you can see our new autumnal chrysanthemum by the front door.
Anyway, it gives you a sense of our cemetery walks. I had more than half an hour of video which I reduced to six minutes, and I apologize because it's probably still too long. I chose the music based on length -- I had a six-minute video and needed a six-minute song -- but I think it works pretty well, don't you?
Posted by Steve Reed at 7:27 AM