A Hollyhock and Some Rags 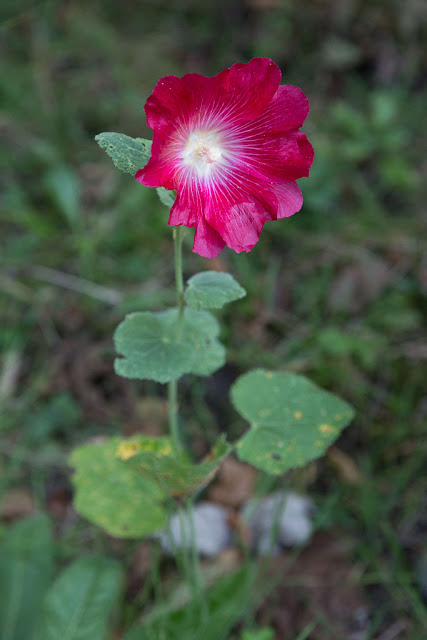 I woke up this morning with "Playground in My Mind" running through my head. "My name is Michael, I got a nickel, I got a nickel shiny and new..." Where this came from, I have no idea. It was a popular song when I was in elementary school, but I haven't heard it in many years, and haven't necessarily been missing it, either. It's as if my sleeping brain sent a jolt of neural electricity through whatever cells store that memory, and when I woke up, there it was. I was humming it as I made coffee, which is the very first thing I do once I'm vertical.

I'll probably be singing it all day. Lord.

I got a surprise yesterday when I went out into the garden and found a hollyhock in bloom (above)! I've been grousing about our hollyhocks all year, how they didn't flower and don't really grow, and then this late bloomer saved the day. As you can see, the plant is only about eight inches tall -- but I still feel a sense of triumph. 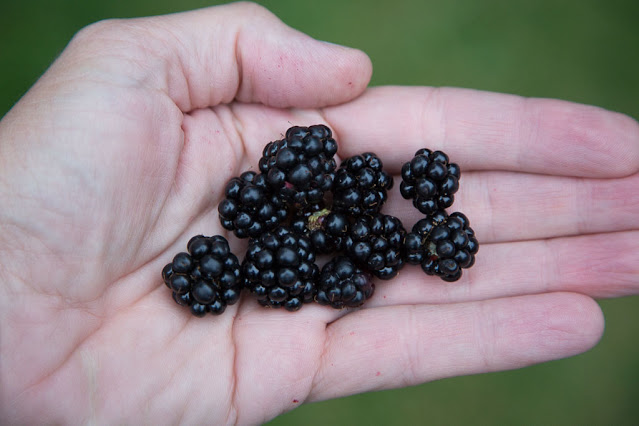 I also found a few last blackberries. I picked them and put them on my cereal. They weren't that good. They start tasting a bit, I don't know, flat as the weather turns colder. 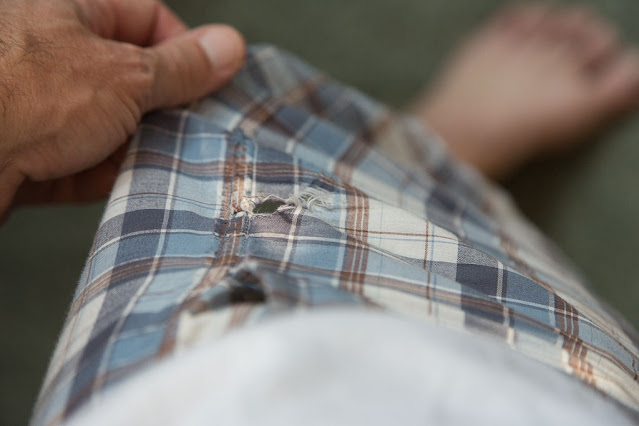 Can you see that hole in my shorts, on my hip below my left pocket? I have holes like this in several of my shorts and pants, because that's where my camera bag rubs against me as I walk. I generally ignore them and wear the clothes anyway, but yesterday I realized these shorts also had a hole in the back! I think it just appeared within the last day or two, maybe as I walked Olga on the Heath, and as I wore them yesterday evening it gradually turned from the size of a quarter to the size of a dessert plate. It was quite funny by the time I took the shorts off and threw them away before going to bed. (I saved the buttons, because I'm thrifty that way.)
I bought those shorts in Florida, I think on the outlet mall shopping trip I mentioned here.
I do have a tendency to keep my clothes too long. Every time I go to throw something out, I think, "Well, I could wear it just one more time." And then it gets mixed up in the laundry and I wash it, and once I've washed it I think, "Well, it would be a shame to throw it away now that it's clean. I can wear it just one more time." And pretty soon it's five years later.

Remember that post I did years ago about some of my favorite clothes that were on their last legs? Well, I still have them all, and I still wear them all.
Posted by Steve Reed at 6:45 AM

Clothes. That is something we have in common. I like the familiarity of old clothes. Even if I was a millionaire I would still be walking around in my old clothes. As for those gaping holes in shorts don't you realise that exposing yourself in public is a criminal offence?

I too have bouts of remembering long forgotten tunes or school year jingles of sorts. I rather wish such memories could be eliminated from my brain to make space for more important things, but I guess our brains are not like a pc hard drive with limited space.

We had the surprise of a very tall hollyhock across the street in one of the small beach gardens. Don't know how it got there, but some asshole saw it, walked over, and broke it off for himself. And many did he get yelled by everyone who saw him do it. I don't have much in the way of old, worn out, holey clothing, but I do have a closet (and drawers) full of items I haven't worn in years.

My husband is exactly the same about his old clothes. Sometimes when he looks too raggedy I have to stage an intervention to get him to throw stuff away!

I'm with you on old clothes. Right now while I am going nowhere I am "wearing out" all of my really old things. No point in wearing new, or even decent, clothing with no one to see it. Comfort and thrift!
Cheers

I'm wearing a pair of overalls that have had hardware repair and patches and I just realized there's another hole forming near a back pocket...
We're ridiculous, Steve.

me too. my favorite capri jeans have holes and areas where the fabric is so thin it's a wonder it hasn't torn. my favorite yard working shorts have a huge tear on the side that shows my underwear though I might be able to mend those like I did my skirt. I hate to shop for clothes so I wear them to the bitter end. just some of them not in public.

No need to feel bad about the clothes, I have some clothes that are well over 20 years old and I know of two sweatshirts that are well over 30 years old.
I bought a bunch of grapes over the weekend at Whole Foods and I'm finding them a little on the dull side too. Like they've given up for the season.

I tend to do the same thing with my clothes too. Some, I've had so long that I can't remember when or where I got them. Duct tape on the inside of the shorts will fix those holes right up good as new. Thanks for the info on screenshot. I'm going to give it a try in a while. Your Hollyhock is beautiful. You have a wonderful day, hugs, Edna B.

"And pretty soon it's five years later." This final statement tipped me over into laughing, as it's EXACTLY how it happens here, too, for both my husband and me. Thanks for that :)

Funny, I was thinking just this morning about some of my old clothes and was wondering what had happened to them. Obviously I outgrew them but I don't remember getting rid of them. Hmmm, I'll have to ask SWMBO. On second thought I don't think that's a good idea. I might not like what I hear.

Oh yes, I definitely wear my clothes longer than I ever should. I can't seem to let them go. I never go clothes shopping, so that makes it even harder to let go of my much-love raggedy things.

Ha ha I understand about the clothes! I have lots of things with holes in that I really like and then think people must think I am some kind of scruff. When the holes are beginning to be bigger than the garment that is the time to throw them out.

Agree with you, Steve. Old clothes are definitely the best and the most comfortable, Anyway, where is anyone going that we need new ones?

It's easy to become attached to clothing, and the familiar is more comfortable than the new.

Now *I* have that song in my head - thanks Steve!