I got an e-mail from Ancestry the other day, saying they'd updated my DNA profile (again). Apparently they do this occasionally as they collect more and more DNA data, allowing them to narrow down their results and be more specific. It's not hugely different from my original profile -- I'm still overwhelmingly British -- but now they've broken Britain into distinct DNA groups for England, Scotland and Wales. So now I can see how much of my ancestry comes from each of those places. I'm not surprised I have a fair amount of Scottish blood, my family being traditionally Presbyterian.

Norway is something new -- my previous profiles, including the last year's update, didn't specify any Norwegian ancestry, although they did pick up some Swedish blood. Again, I suspect this has something to do with ancient Vikings. I don't know of any Scandinavian relatives in my traceable past.

What's now missing, sadly, is the tiny smidgen of African DNA in my first two profiles. The first profile said "West Africa," the second specifically Mali. But Mali is entirely gone now. Apparently I have no Malian roots after all. 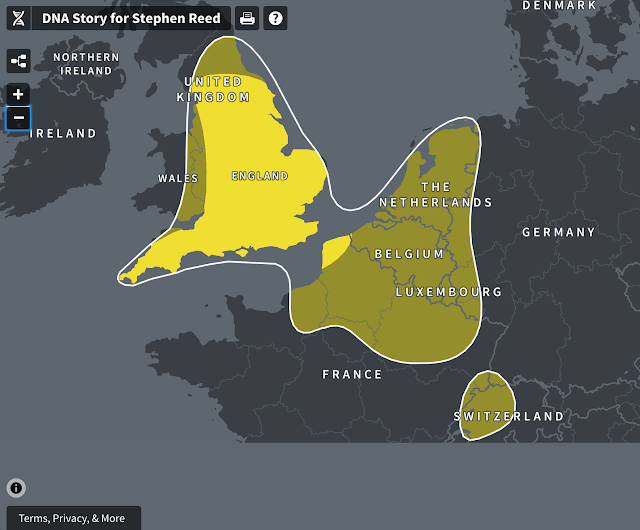 Here's a closeup of the regions that feature my English DNA -- as you can see, they go beyond England into parts of France, the Low Countries and even Switzerland. 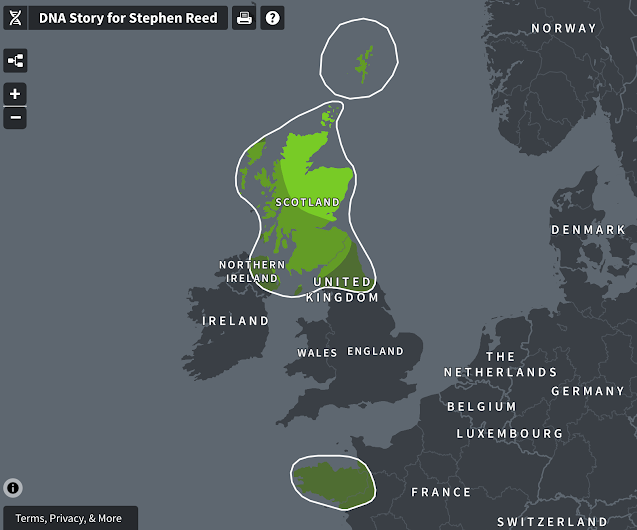 And interestingly, apparently my Scottish DNA is shared with some people in Brittany, in western France. I think I remember reading that the Celts did make their way to that part of continental Europe. 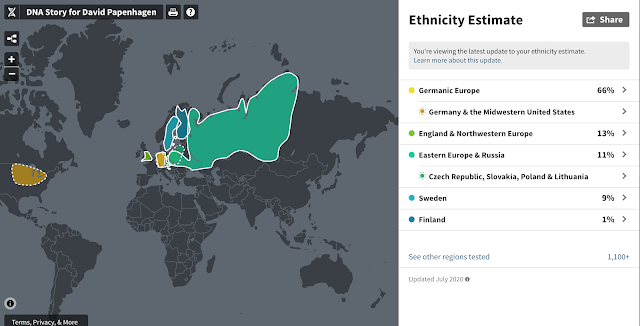 Again, not hugely different -- mostly Germany and Central and Eastern Europe. As before, his "genetic community" is correctly identified as the Midwestern USA, and mine is correctly identified as North Carolina and Missouri. That's where our descendants settled when they came to North America.
So, pretty interesting! I'm not at all surprised that I apparently have no African blood after all -- I thought maybe it was some genetic root going way back into prehistory, but it was always a tiny, tiny amount, apparently within the margin of error. I'm just not very exotic!
Posted by Steve Reed at 7:39 AM

To a Malian, you would be a very exotic Scottish American.

Yay! I get to comment first because it's 3am here on the north shore of Long Island and I can't sleep so I thought I'd check out Shadows & Light. Can't sleep because zRGB died and the fight for SCOTUS is going to get ugly real fast. The shitshow never ends in Trumps America.

The dance of the Malian people is as varied and widely expressed as their music. In fact, as far as Malians are concerned, the two are inseparable. Typically, drums have been used for ceremony and celebration, whereas the focal point of the activity is generally the dancing; drummers are just there to provide the music. To this end everyone, including the drummers, is there to support the dance.The identifiable forms of traditional dance one sees in Mali would be in the villages of the different ethnic groups, on the streets of Bamako during celebrations, and in formalized performance groups. But the key question is: Are you a drummer or a dancer?

Aren't DNA tests supposed to be reliable? They are used in courts as evidence. Yet an earlier one indicated you had African genes and now you don't. But I don't have a good understanding of DNA as surely we would all have a continental African gene from hundreds of thousands of years ago.

I wonder if mine has changed in any way. You and I have almost no genetic overlap. I love Dave's; that's the first time I've seen the Midwestern United States on a genetic map (even if it is "Germand &).

That is so interesting Steve that you have landed up sort of back where you came from.
I know that I have Irish in me as my Gran on my Mums side was half Irish.
Briony
x

Vivian: When I wrote this post, I hadn't yet heard the news about RGB. Aaaaaaaaargh!

YP: Where would you be without Wikipedia?

Andrew: I don't think these sorts of DNA tests are comparable to the ones used in court, which are looking for overall matching genetic patterns, rather than the source of those patterns.

Mitchell: You should check! They sent me an e-mail saying mine had been updated.

Yup - makes sense as I think you do have quite a bit of the Nordic look about you.
And I think I’m going to need to stay away from the news channels at least for today. Too horrifying what could happen next.

Thinking of my ancestors overwhelms me. All of them, living and toiling and traveling and having children and raising them against the odds and here I am and some days I just wonder what it was all for. I guess it's just life. Best not to get my ego into it.

I would be up shit creek without a paddle.

We're mourning the loss of RGB but reading some encouraging bits this morning about the upcoming battle to replace her. In these Trumpian days one has to grab every bit of hope.

Oh well Steve I am Indian, Black and caucasion but they call us french, cajun. geecha and probably other names too. That's Louisiana. (lol) It's good you hadn'T heard about the death of the iconic RBG. I had to stop watching the news. That orange thing and McConnell haven't given her family time to mourn before they are talking about her replacement. It's sad but both of their dark days in hell is right around the corner. i use to like watching television but bullshit is always showing their ugly head. I am now watching the big valley and old western reruns.

Forgot one, i left out the French bloodline. Most people don't know but Instead of teaching any other language in school, we were taught French.

I'm not very exotic either. I did 23&Me and was not surprised to learn that I am 99.9% Ashkenazi.
RGB's passing at this tumultuous time in our country is that much more tragic and heartbreaking given the political chaos it triggers. We mourn her loss in so many ways. A true hero.

I'll have to check with my sister and see if she's gotten an update. we are about as white as it gets...UK, Germany, France, Denmark, Finland, and 2% European Jew (I figure that's part of the German).

There is a time in my life when I would have thought of Scottish as very exotic. I still think it's a great ancestry to have.
The RBG death has taken a toll on me. I had a terrible time trying to sleep last night. I don't think I fell asleep until 6 am. I didn't think 2020 could get any worse.

Mine looks almost exactly like yours - but my top three percentages are 55%, 16%, & 15%. Also, my people settled in eastern AND western NC, which matches my family history. Interesting!

Do agree with Ms Moon's comment (hope I interpreted it correctly).

Why would one want to know the detail? I only have to look into the mirror to know where my cheekbones come from. Go east. And, no doubt, one of my (female) forebears will have had it off with a Fin, another with a Russian considering both nations' proximity to my mother's family geographical origin. Throw in my father's genes and the world is your mix, or rather mine.

The Angel may as well be a Viking (not by swinging an axe or pointing an arrow at you - but by virtue of his long blond locks and general looks and demeanour). The Angel's father (English) has been mistaken for Dutch, German, Swedish. The Home Office (under Theresa May) once decried me as Turkish. Leaving aside that they had my passport in front of them, since when does a Turk have my hair colouring? I was informed, fair enough, that even Turks dye their hair. It's my dark dark dark brown eyes and black brows that gave away the "deception". Never having died my hair EVER, I was hurt.

To be satisfied that I exist at all I am happy to know the percentage of water my body is made of, and that Adan and Eve were thrown out of paradise. Probably by the Home Office.

No idea how old the photo is you use. You look exotic enough. By which I mean I'd go and have a drink with you in public.

Your Scandi roots probably come from Scotland anyway!
It is a fascinating subject

This is rather interesting. I haven't done this DNA thing, but according to my family history, my background probably looks quite a lot like yours. Enjoy your day, hugs, Edna B.