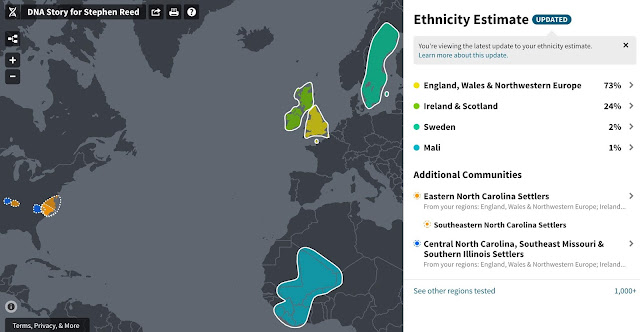 You may remember a couple of years ago, Dave and I had our DNA analyzed by Ancestry. We thought it would be cool to see where we're from genetically, just for curiosity's sake.

At the time, Ancestry said I was mostly British and Irish, with smaller amounts of Scandinavian and Western European DNA, and trace amounts from other regions including the Iberian peninsula, Italy/Greece and West Africa. My analysis also correctly pinpointed my genetic "communities," where people sharing similar DNA profiles live, in North Carolina and Missouri -- where my parents both have family roots.

Well, the other day, I got an e-mail from Ancestry saying they'd revised my profile. Apparently as more and more people get DNA testing, they have more data with which to work and they can narrow down the areas our DNA matches. So I checked out my new genetic identity (top). 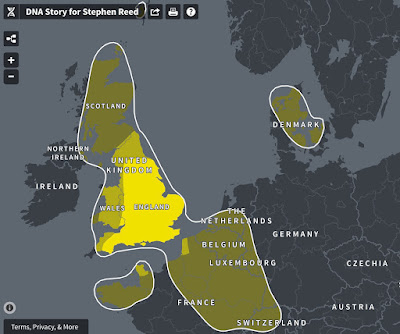 It remains predominantly English, Welsh or Norman, now at an astonishing 73 percent (the brighter yellow regions above). Ireland and Scotland provide an additional 24 percent, meaning 97 percent of my DNA comes from the British Isles or northwestern France. The amount of Scandinavian DNA in my profile dropped from 20 percent to just two percent, now specifically said to be Swedish. And I still have a mysterious sliver of DNA identified as West African, specifically pinpointed to Mali.

So what does this mean?

Well, I guess not much has changed. I knew I was mostly English, based on family trees and genealogical work done by my father and grandfather. If I remember right, my Dad traced us back to Normans not long after the Battle of Hastings in 1066 -- and reportedly part of my family originated in the English region of Ely in Cambridgeshire. My profile still shows me connecting to genetic "communities" in North Carolina and Missouri, and even pinpointed my paternal cousin Linda, who is a total stranger to me but who apparently also used Ancestry, as a close relative!

The Mali thing, though, blows my mind. When my earlier profile showed West African DNA, I figured it was a prehistoric remnant of early man, or maybe just a blip, an inaccuracy. And indeed, the trace bits of DNA from regions like Iberia, Italy/Greece and Russia/Finland in that earlier profile have now vanished completely. But West Africa is still hanging in there, and to have it narrowed down to a specific part of West Africa makes it somehow seem even more certain to be a real thing.

Do I really have a tiny smidgen of African blood? Could one of my ancestors have canoodled with a slave, maybe? It seems if that happened, at least in colonial or Antebellum America, I'd have more than just one percent of that DNA, though. Maybe it was an ancestor from much farther back, a sailor or trader or crusader?

Or is it possible that my Norman DNA was also present in Frenchmen who went to serve in Mali in the Foreign Legion and canoodled there? Maybe my Malian DNA, in other words, is really French DNA transplanted to Mali? Or North Carolinian DNA transplanted to Liberia via resettled American slaves?

Or maybe it's just a mistake. My profile says that although it shows 1 percent Malian DNA, the actual level could be 0 to 1 percent.

But I hope I have African roots! 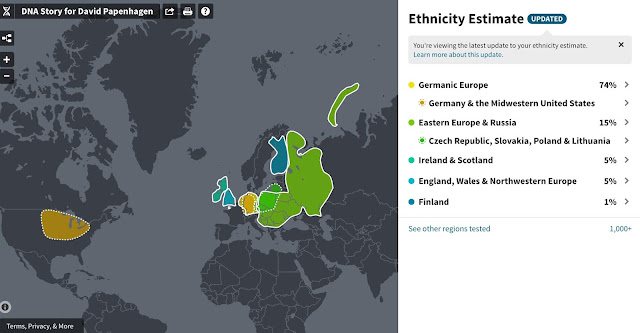 Dave, on the other hand, got a disappointment with his revised profile. We were tickled to learn in 2017 that he had 6 percent European Jewish DNA -- it seemed amusing given his strict Lutheran roots. Well, the Judaism has vanished completely with the latest revisions -- he's now 89 percent German and Czech, which conforms to his knowledge of his family, with a smidgen of British/Irish thrown in. (His 1 percent Finnish DNA is a curious mystery -- like my Malian DNA, it could be a mistake, or a remnant of a mysterious traveler far back in the mists of time.)
Posted by Steve Reed at 6:01 AM

I think your ancestors were going a step further than "canoodling" Steve. It sounds like they were lascivious beasts whose main leisure pastime was procreation. Perhaps you should visit Timbuktu in Mali after all - I am referring back to your post of January 30th 2016 - you will at last be able to dance with your true kinfolk and find peace within.

I really love reading of your Ancestral heritage. I have thought of doing my own but never have. I am actually afraid of what I might find lol.
I like to think I am a Mongrel puppy that has a bit of roots in all the lands :)

I will try and catch up on your blog soon. I was back in the hospital. More serious this time than last but I am home now.

My son is coming home today for Thanksgiving. I know that I want to help but I am banned from the kitchen! It will be nice to have all 5 kids home and under one roof. It has been way to long. Have a fantastic day.

What fun. My ethnicity estimates have changed dramatically recently, as well. But they are now more in line with what my actual genealogy tells me. I wonder how specific these estimates might become as more and more people submit to DNA testing?

Mali is my second-favorite West African country. Good stuff there. Cliff cave dwellers, great weavers, good musicians. Oh, if only genes could talk, the stories yours would tell.

I, too, was hoping for something interesting in my DNA but my people have no imagination. It's all Scottish and English, not a hint of African or Sephardic genes. Not even a Dane, or an Alaskan.

I recently helped a third cousin twice removed (or something like that) who I never knew, find her birth mother, because we came up as distant relatives on 23andMe. I had to grill the relatives about an out of wedlock baby born in the 1970s, and it took a year and a half for someone to admit it happened in our family. When I made the call to the family member, a distance cousin and a stranger to me, we made small talk and then I told her why I was calling -- that I wanted to put her in touch with her daughter -- and she said, "Oh! I've been hoping for this call for 40 years!"

I always thought I'd find some African blood in my ancestry too - or (less likely) American Indian. This is purely based on the fact that as my grandmother aged she looked more & more like an ancient African-American lady, and that my uncle John always looked like Ed Ames to me. Ha!

Very cool about NC - maybe we ARE related!

That's so interesting. It's weird- the older I get, the more of a tickle of curiosity I have about my own ancestors. So far it's just a tickle though and I haven't done a bit of research.
Odd to think of all of the lives that came before us which made us possible. Each and every one of those people had their own unique lives and stories. Sort of mind blowing.

Very interesting. I haven't had mine done, but I do have a beautiful book that a cousin put together after many years of record searching. The bulk of my ancestry comes from England, Scotland, Ireland. They came over on the Mayflower. You and Dave have a wonderful Thanksgiving Day. Hugs, Edna B.

This is so interesting. It makes me want to do it and see what I find.

I can safely say our ancestors never crossed paths or canoodled! I did 23&Me and found that I am 99% Ashkenazi. The thing that surprised me the most is that I have some East Asian and Native American somewhere in that remaining 1%. I love the genetic mysteries in our our DNA.

I didn't realize that they took a second look at your DNA I guess new technology comes along.

It's fascinating to get this detail of information. When I had mine done, by both Ancestory and 23andMe, I discovered no Native American DNA despite my great grand parents insistence that one of our own married an Indian woman by the name of Sarah Waterfall. I grew up taking this for gospel truth. Nope. Like you, I have some west African DNA, and I do wonder if this is because Africa is the motherland for all of humankind.

My DNA shows mostly British Isles, Western European with a touch of Scandanavian and West African.

That Mali bit is interesting. My results were honed down a bit as well, pretty much all England, Wales, Ireland, Scotland for me, with 1 % Finland. Its all fascinating. The biggest surprise is I seem to have found a half sibling I never knew about. It has really brought up some interesting feelings. The key players have all passed on, so I'll never really know the story, I don't think. We are very gingerly forging a bit of a relationship through email and social media. I wonder just how many families have similar stories.

mine is white bread boring...lion's share - english/scottish/irish, some -german, french, a little scandinavian (danish), 2% european jew (I figure that's from the german), and 1% finnish. curious that they don't include Finland in Scandinavian.

It *is* fascinating but I'm suspicious when the service changes radically some supposed results.

Fascinating. I do tend to think we are all citizens of an ancient far flung world.

So you are back where you belong then Steve, in good old blighty, lol
Briony
x

We could be brothers x

I find this all so very fascinating and I'd love to see mine but my family/siblings object for various reasons related to the German privacy laws. It's a bit more complicated here.

But we got my man's DNA profile done as a treat for a birthday. It was such a downer because he is 98% Irish and 2% Scottish. I realise this is rare but, well, also quite dull.

I would never intentionally hand over my DNA to any agency. I truly believe it is a bait and switch scheme and it could be used in a variety of ways other than finding long lost relatives. I have done extensive genealogy research and found I come from a long line of scoundrels on both sides of the family.

Interesting! I wonder if the results will be revised even more in time.

Do you feel more at home in Britain or in the US? Do you think our genes "recognize" home?

Your 1% Malian doesn't have to be from the prehistoric past--1 generation back, your parents, each contribute (on average) 1/2 your DNA, 2 generations each 1/4, great grandparents each 1/8; 1/16, 1/32, 1/64, 1/128th. So between 6 and 7 generations back there could have been a full blooded Malian. If you figure a new generation every 30 years, that's 180 to 210 years before you were born; and you have a ton of ancestry in slaveholding states. Mali is in West Africa, source of most American enslaved people. To me that seems the most plausible, tho perhaps not the most palatable, scenario.

Sorry about that; sometimes my decades as a statistics prof just takes over...