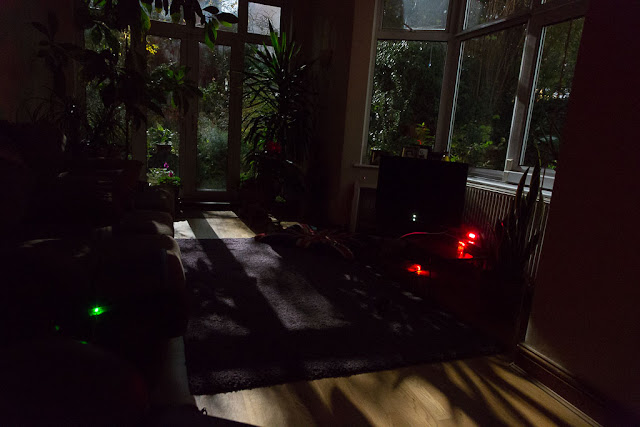 I sometimes get up in the middle of the night and wander around the house. It's not that anything's bothering me or that I'm uncomfortable -- it's just my sleep cycle. I often wake up about 3 a.m. and walk around, get a drink of water, and go back to bed.

Anyway, I got up early Wednesday morning and found the living room bathed in moonlight. It was a full moon and the light seemed bright enough to photograph. So I got out the camera, set it on "bulb" (which allows me to hold open the shutter as long as I want) and tried some shots.

My hand-held pictures didn't work at all. I have a pretty steady hand, if I do say so myself, but even when I think I'm not moving, I am. I don't have a tripod, so I looked around for a surface where I could rest the camera. I wound up using the back of Dave's recliner, which isn't ideal because it's puffy and upholstered as opposed to hard and flat -- but it did the trick. I held the shutter open for eight to ten seconds, on ISO 8000.

I love how bright the red lights from the digital clock, TV box and power strip seem, as well as the green light on the left, from Dave's charging computer. There's something so peaceful about a quiet, dark house in the wee hours of the morning. (I was going to write "silent," but I'm sure there was actually a lot of snoring in the next room -- both canine and human.)
Posted by Steve Reed at 6:29 AM